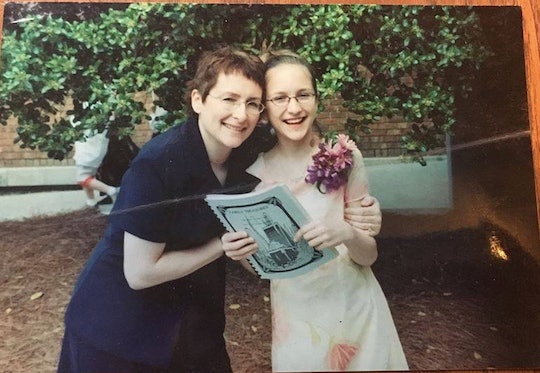 Grief Can Last For Years, So Why Don’t We Acknowledge It?

The dream usually goes like this: I'm frantically driving to meet my mom somewhere, for lunch or for coffee, but often just because I want to see her. I'll call her and ask her where she is, and she'll answer in the way she used to: "Relax, Bea, I'll be there soon." I'm usually aware throughout the dream that my mom died in July 2012 from cancer. But in the dream I know I can see her one more time if only I can get to her — but I never do. Minutes before I'm supposed to see her, sometimes as she's walking up to me, I wake up from the dream, and I'm crushed with the reminder that I will never see my mother again. As I wake up, I choke on sobs and clutch a pillow to my chest, digging my fingers into it, in desperate effort to fill the embrace my mom no longer can.

This is one example of what my grief has felt like over the last six years. These stressful dreams about losing my mom are one symptom of the post-traumatic stress disorder (PTSD) that I developed from witnessing her death, and those PTSD symptoms are only one part of the mental health puzzle I've been attempting to navigate in a culture that doesn't provide enough support for those who are grieving.

My mom died when I was 20. I was less than a month out from starting my junior year at the University of North Carolina, Chapel Hill. My dad woke me up just after 10 a.m. on July 27, 2012. My mom couldn't speak; she was sitting in a chair in her room and rocking back and forth slowly. Her eyes couldn't focus on anything. Her cheekbones were protruding because she couldn't eat much solid food. The cancer had slowly eaten away at the fiery woman who raised me, and I had watched it happen.

Once her hospice nurse arrived at our house, she and my dad moved my mom to her bed. They set her down and I took my mom's hand, and then it happened. But it wasn't like the movies I'd seen, and what I'd come to expect of her death. She didn't close her eyes slowly while I said goodbye. She turned her head to the side and vomited what looked like green bile all over herself and the bed. The nurse was rushing to catch it with a towel. My mom's hand jerked away from me and I screamed. I don't remember screaming, but years later my sister told me that her defining memory of that day was walking into the house to me screaming, "Mom, no!"

I only remember patches of the day now. I remember trying to catch my breath while asking the nurse if mom had choked on her own blood. I remember sitting next to her bed after the nurse cleaned her and saying a proper goodbye (I felt like I had failed because I couldn't maintain my composure during her actual death). I remember going into my room, and then my dad saying, "Jo, stay in your room because they're going to take your mom out now." I remember watching movies with my dad for what felt like days, but I don't remember what movies.

I thought only soldiers could get PTSD.

For almost a year after my mom's death, my memory of her was defined by the horror of that day. With the help of therapy and medication, I have slowly been able to recall the many good memories I have of her: she hoarded pens like no one else I've ever met, for example, and she had no fear of dropping it low during the "Cha Cha Slide," in front of all my friends.

When I called one of my best friends after my mom's death to tell her what happened, she avoided me. A week later, when I finally heard from her, she "didn't know what to say," then we stopped speaking. I spoke with professors who factored attendance into final grades, and only one was supportive and accommodating — the one who had also experienced recent loss.

I felt as if others were saying to me, 'Yes, we want to help you, but at some point you're going to have to get over this.'

Others' stiff reactions to my grief made me think that I, too, should just try not to think about it, so I numbed myself out and put my grief on hold. I drank heavily, I had nightmares, I struggled with suicidal ideation silently on and off. I felt like the extremity of my grief meant there was something wrong with me. I felt as if others were saying to me, "Yes, we want to help you, but at some point you're going to have to get over this." And so I forced myself to be more cold to my pain and my grief.

For years I would oscillate between feeling positive about who I was becoming after my mom's death, feeling numb, and feeling overwhelmed by pain. There would be periods of six months where I avoided talking about her and I wouldn't cry about her death, and then I would be hit with a nightmare where I would relive that day in July 2012: she would be vomiting and I would be screaming, and sometimes I would wake up screaming. In the days after those episodes, I would struggle to get out of bed, or I wouldn't eat for days, because I was overcome with sadness, but also because I hated myself for feeling that way. Why couldn't I just remember how great of a person she was? That's what everyone around me was telling me to do.

It was in those moments that I felt truly "broken."

The United States doesn't provide any emotional or mental health education, so I had no idea what I should be feeling or what healthy grief looks like (I also thought only soldiers could get PTSD). Even mental health professionals aren't sure what healthy grief looks like, despite the fact that everyone will experience loss and grief in their lifetime. "Normal" bereavement was defined by early versions of the Diagnostic and Statistical Manual of Mental Disorders as a condition that lasted for two months. Updates to the diagnostic suggest the average for that period can be up to two years, but experts say people should be able to "move forward" with their lives after about a year, according to Mayo Clinic. People who experience exaggerated symptoms of grief that affect their daily life more than a year after a loved one's death are said to have "complicated grief." But, according to Mayo Clinic, "There's currently no consensus among mental health experts about how much time must pass before complicated grief can be diagnosed."

What the medical community does agree on — and what the confusing diagnosis of "complicated grief" seems to indicate — is that grief, loss, and the depression that can follow comprise a highly individual response for everyone. A better way of looking at it is not in terms of "healthy" or "abnormal" grief, but as an innate response that will require different support depending on the person. Some people may not grieve for very long; others may not grieve immediately but may grieve later; and for some it might be an ongoing process. Prior depression or anxiety also affects how someone will manage grief, but I didn't know any of that when I was 20.

At the root of my pain wasn't only my mother's loss: it was this general feeling people were giving me that I shouldn't take time to feel the pain. I shouldn't need accommodations during school to help me get through the day. I shouldn't ask for help from colleagues when things are rough. I need to be able to pull my weight, so to speak, because people don't want to talk about grief.

It has taken three years of therapy for me to undo that thinking and for me to learn that I needed to do the opposite of what everyone had been saying in order to cope with my PTSD and depression: I need to set aside time to think about my mom and the day she died. I need to request a personal day occasionally to watch her favorite movies and cry (and remind myself that it's OK to cry). I need to speak openly about how grief is totally absent from some of my days, and how it seems to consume others. Instead of, "I don't know what to say," or "I can't imagine," I tell my friends to ask, "What do you need? What has been hard recently?" My one professor in college who made me feel most seen had said, "It's not a level playing field. I am here for you, and here's what we can do to make sure you succeed."

I still encounter that coldness from friends or from colleagues, and it's thanks to the persistent stigma that surrounds grief. When someone grieves a loved one for a short amount of time, people label them as callous, disrespectful, or damaged because they refuse to "deal with it." But if they grieve a loved one for years, coping with depression or maybe PTSD, allowing their grief to come and go, then they can't "get over it," they're letting it hold them back, or they're an inconvenience to their employer.

I am doing everything you're supposed to do when you experience a traumatic loss: I attend therapy, I take medication, I exercise and try to eat well. But I still have days when my grief is painful.

I didn't want to embrace the ebb and flow of my grief, because to most of the country, it means I'm broken. Taking a year off from college didn't seem like an option — and, looking back, it still doesn't — when grief and its associated symptoms are still treated by most employers and social groups as something that needs to have some kind of end date.

But in reality, grief, PTSD, and depression, are all completely normal responses when someone experiences the loss of a close loved one in a traumatic way. I am the normal one here, and I am doing everything you're supposed to do when you experience a traumatic loss: I attend therapy, I take medication, I exercise and try to eat well. But I still have days when my grief is painful, and those bad days don't make me broken. The dysfunction lies in the response people like me have received from others.

When I tried to stuff my grief inside of myself, my nightmares were relentless. Now that I make room for my grief and work to let go of my guilt about it, my dreams have changed. I dream about taking vacations with my mom, something I wasn't often able to do while she was alive. In one such dream, I was upset and crying, and my mom looked at me and said, "Jo, I'm here. It's me, and I'm OK." When I woke up I felt like I could still hear her voice. There were hot tears in my eyes. Sometimes I can almost smell her perfume, and remember the feeling of her callouses when she held my hands in hers. I miss her. God, do I miss her.

If you are experiencing suicidal thoughts, contact the National Suicide Prevention Lifeline on 1800-273-8255, available 24 hours a day, 7 days a week.