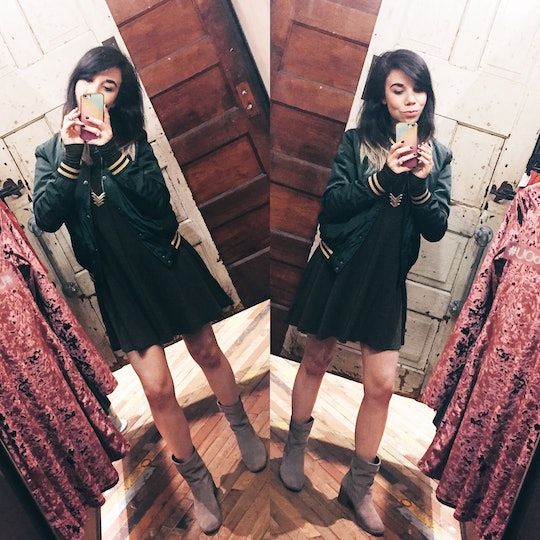 My Friends Are Shaming Me For Getting Pregnant

When I told my best friends that I was pregnant, I was met with some of the greatest reactions I could ask for. There was lots of squealing, and they immediately started planning a baby shower. As the first in our circle of friends to get pregnant, I was something like a pioneer: I was being sent out into the world to explore uncharted territory, ready to report back with any findings.

Unfortunately, not all of my friends had the same reaction. My group of friends are a mixed selection of newly married women, soon-to-be brides, and single girls. And some of these people reacted to my pregnancy news with eyebrow raises.

I shared word of my pregnancy through several different media, depending upon the people. My best friends were told over the phone, as were my family members, but when it came to some of my more casual acquaintances — the ones that I would hang out with when I’m visiting my hometown, or those who pop up every year just to say “Happy Birthday” on Facebook — a text message seemed to suffice. And I found their responses a little bizarre, to say the least.

I group-texted two girls I went to college with, letting them know that my husband and I were expecting a baby girl this fall. “Congrats!” one of them wrote back, immediately followed with: “Omg you’re really an adult now.” I was about to respond with an appropriate emoji when the second girl chimed in to say, “Seriously, I’m lucky if I remember to pay my rent on time.”

The other girl texted: “LOL right? I can barely take care of my dog, let alone a human.”

There’s a misconception that children are some kind of death sentence for our pre-parenting lives.

After that text exchange, I began to pay attention to these types of comments, and I noticed that I started getting them — a lot. “I can’t imagine being pregnant,” one friend told me a few weeks later, adding, “I’m way too selfish to even think about that.” A former colleague quipped that she’d miss her daily wine glasses way too much to become a mom. And another college classmate of mine said that she feels like she has “too much” to do in her life before getting pregnant.

To be fair, I think this attitude might be somewhat specific to my circle of friends, because in the context of American society at large, it's not that unusual for me to be having kids at my age. In fact, the average age of a first-time mom is 26, according to 2014 data, and I'm older than that. But in my group of friends, it seems like everyone feels like having kids is something you're supposed to do when you're older, after you've accomplished everything you want to in life, and to be honest, I find that attitude ridiculous.

Let’s be honest — we’ve all seen those memes online that basically say the same thing as my friends have said to me. The ones that read: "Everyone's over here like ‘Hey, I'm getting married and having babies’ and I'm like ‘Hey, who wants to get drunk and travel the world with me?’" The comments from my friends are basically the real-world equivalent of those snarky e-cards that circulate on social media. And here’s the thing: it isn't cute. Saying you have "too much" to accomplish before you can even think about having a baby isn't funny and self-deprecating. In fact, it’s pretty obnoxious and offensive to women with kids.

My friends might think they’re just putting themselves down by saying they can’t remember to pay their rent on time or they can barely take care of a pet. But I hear something a little different. It’s this idea that members of our generation are somehow “too young” to raise children of our own, despite the fact that we’re all technically adults. It’s the same feeling that goes into those annoying “#adulting” Facebook posts, as if people think they deserve a gold star for filing their taxes or unloading the dishwasher. You’re not #adulting; you’re acting like a damn grownup… because you are one.

Becoming a mom is not some sort of endgame, but rather just one piece of my life, a stepping stone that ties into a bigger journey.

And as for my friend who told me she has “too much” to do before she gets pregnant, I have one question: What does that even mean? Do you really believe that becoming a mom is some kind of clock-stopper, where your entire sense of self is reset and everything that came “before” somehow cannot exist “after?” I’m calling bullsh*t on that idea. I have plenty to do now, and plenty that I will do after I give birth to my daughter. Becoming a mom is not some sort of endgame, but rather just one piece of my life, a stepping stone that ties into a bigger journey.

There’s a misconception that children are some kind of death sentence for our pre-parenting lives. People trick themselves into thinking that they have to cram all this “living” into the years before they pop out a kid. But what happens if you don't check off all those items in time? Are you doomed to live a life of regret? Or is it possible that having kids and accomplishing your goals on your own terms are not, after all, mutually exclusive? While my life will obviously change quite a bit after I become a mom, I don’t plan on losing my identity in the process. I'm still the person I’ve worked so hard to become, and I'm still proud of the things I’ve worked hard to accomplish.

People trick themselves into thinking that they have to cram all this “living” into the years before they pop out a kid. But what happens if you don't check off all those items in time? Are you doomed to live a life of regret?

So to all of my friends who have inadvertently shamed me for becoming a millennial mom, please know that it’s okay to not have all your sh*t together. It’s okay if you forgot to pay your rent, or if you feel like a bad fur mom to your dog sometimes. It’s okay if you want to travel the world, or if you can’t go without your daily dose of rosé. But none of those things mean that you can’t be a parent as well. As for me, there’s still a lot that I have on my to-do list. And I don’t plan on slowing down for any of it.