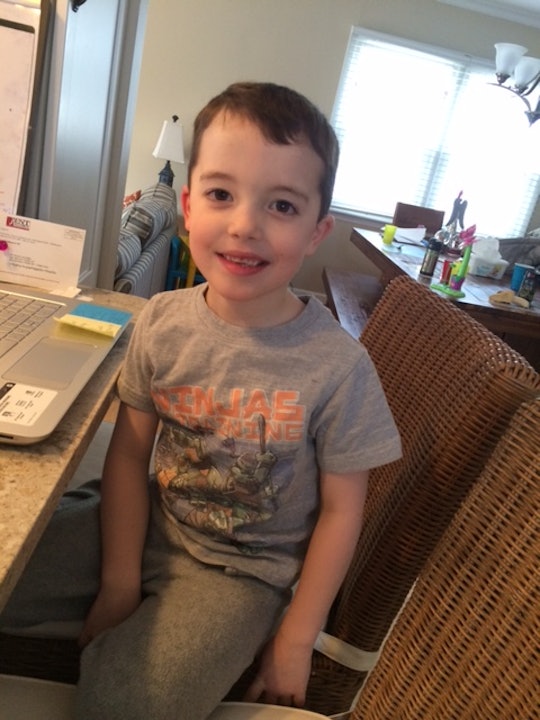 My son is incredibly sweet, lovable, and smart. He is my first child, and he just recently turned 6 years old. He's currently in kindergarten, takes karate and swim lessons, and loves climbing and running at our local playground with his younger brother and sister. He loves animals and can tell you absolutely everything about them. He was recently selected as "Student of the Month" for the Virtue of Kindness — I was both so proud and not at all surprised. He's an amazing child. He has a huge heart, and he loves to play and run. He also a sensory processing disorder, which makes day-to-day life difficult at times.

Every day, hour by hour, minute by minute, my son is on high alert for the next "surprise" to come his way. These "surprises" can be any number of things: fire drills at school, overcrowded rooms, getting a haircut, clipping his nails, having his picture taken, making a scheduled trip to the doctor, even watching his favorite part of a TV show — and that's just the short list. Each of these seemingly "normal" situations has the potential to set him into a tailspin of fear, anger, and sadness. I do my best to prepare him on what to expect when we go places and to intercept anything upsetting that might come his way, but the idea that I'm ready for any- and everything is impossible. I mean, I'm good, but not that good.

His reactions to these situations can range from covering his ears, to pacing, to crying, to yelling, or to running from the room. We never know what the "surprise" may trigger. Even though none of these are ideal behaviors to deal with, we've been fortunate that as he gets older and understands more about his sensory processing disorder, it's becoming easier to redirect him and focus on more positive behavioral reactions to whatever is upsetting him. It's a work in progress, and it'll likely always be.

According to the Sensory Processing Disorder Foundation (SPDF), a sensory processing disorder (SPD) occurs when sensory signals don't get organized into appropriate responses. It's commonly referred as a neurological "traffic jam" that prevents certain parts of the brain from receiving the information needed to interpret sensory information correctly. SPDF also notes that a sensory processing disorder manifests differently for every person. Motor clumsiness, anxiety, depression, school failure, behavioral problems, and more are all common in individuals with SPD.

Sometimes I worry that people just view my son as a spoiled, bratty kid. To an onlooker who doesn't know us, my son doesn't look any different from a "regular" kid. But he is.

My husband and I always say that if our son wasn't our first, maybe we would've been quicker to pick up on the red flags in his behavior without brushing them off. Not that we would've compared our children to each other, but we would've have something to measure against; a warning sign to look out for. Instead, we made excuses for as long as we could, but it the idea that something was "wrong" was always in the back of our minds. And finally, at his 2-year appointment, however, we got the answers we'd been putting off. We met with early intervention observation teams, neurologists, developmental pediatricians, and neuro-psychologists. Our developmental pediatrician agreed that our son's behavior was not typical for his age and that he did in fact have sensory issues. He was also diagnosed with a sensory processing disorder, and then he was also diagnosed with a speech and language delay. Although we were happy to have answers and a path in which to find help, the news was devastating to hear.

I constantly feel like I've failed my son because I can't always prepare him for every possible oncoming scenario. I do my best to help him through, and to give him all the details I have, but I can't predict what comes next.

A few months ago, when he wasn't feeling well, I explained that we needed to have the doctor check him out in case medicine was needed to help him feel better. The check-up included a swab of his throat to check for strep, and to say the throat culture made him incredibly upset is a severe understatement. Every move the doctor made served as yet another surprise to add to the ever-growing list of things my son doesn't react well to. When all was said and done, he was a mess of tears and wails and it completely shattered my heart. I couldn't stop the doctor (we needed to see if he had strep), and I couldn't calm my son once his snowball reactions started. I stood by feeling completely helpless.

Sometimes I worry that people just view my son as a spoiled, bratty kid. To an onlooker who doesn't know us, my son doesn't look any different from a "regular" kid. But he is. A child (or person) with sensory challenges feels things differently than most people do. A swab of his nose isn't as simple as it would be for you and me. As his mom, I constantly feel like I've failed my son because I can't always prepare him for every possible oncoming scenario. I do my best to help him through, and to give him all the details I have, but I can't predict what comes next. As he gets older and older, anticipating what could happen gets more and more difficult.

If I had known then what I know now, I wouldn't have kept trying. I hate that I continued to attend those classes for as long as I did. I stupidly thought the more I exposed him, the better it would be, and that he'd "get over it" in time. The truth is, he won't.

I've become, what I like to call, very "sensory sensitive." I'm always super tuned into my surroundings and I try to anticipate any possible changes that could occur at a moment's notice. I am constantly on high alert to try and protect my son from getting upset. As you can imagine, living like this is beyond stressful. When I look at my two other children, I'm overwhelmed with guilt. I worry that because of my preoccupation with my oldest son that my two younger kids may be missing out on their own lives. Even my 2-year-old daughter now knows to remind her big brother not to cover his ears when she sees him starting to get over stimulated. I love that she is tune into her brother's needs, but it's still heartbreaking.

Even though we have a clear name and diagnosis for my son's delays, it hasn't made our lives together easier. So many of the things my son has issues with are things that other "typical" children love. Once, when my son was about 1-and-half years old, we went to a local mommy and me playgroup so we could socialize with other parents and kids in the neighborhood. It was a casual setting — everyone sat in a circle singing songs, reading books, and doing crafts together — but my son shrieked like he was in agony the whole time. I was mortified — they were all songs that we used to sing together at home! But I didn't know what was wrong. So I kept taking him, thinking that things would get better as he got more comfortable. If I had known then what I know now, I wouldn't have kept trying. I hate that I continued to attend those classes for as long as I did. I stupidly thought the more I exposed him, the better it would be, and that he'd "get over it" in time. The truth is, he won't. And that's OK.

I've realized that having a child with special needs is a live-and-learn kind of life. Whatever my son liked today may not be the same for tomorrow. So we always have to be ready for the unexpected. We live on our toes, ready to move and adjust and react. Though it's been incredibly tough on me, I know that my son's happiness is what matters most. If he isn't ready for a haircut today, then we'll go tomorrow. If he needs 30 more minutes to prepare himself, then we'll wait. I've decided to just celebrate how far we've come, how much he's overcome, and especially what we have conquered together as a team.