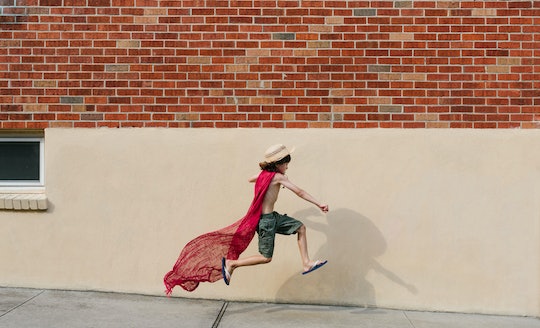 “All boys are hyper and inattentive!”

But I knew something was different about my little boy. He wasn’t like other kids in his preschool class. He clearly stood out as being the most hyper, the most prone to wander off, the most likely to be lost in his own little world. I was almost positive my son had ADHD.

The months and years leading up to his diagnosis were fraught with anxiety. I spent countless hours and shed countless tears panicking about what my son’s future would look like — his education, his friendships, his ability to succeed in life. How much would this diagnosis hinder him?

We confirmed when he was in second grade that he did indeed have ADHD, and I read every article and book about it I could get my hands on. I changed our diet to primarily organic and cut out food coloring and hormones and as much processed sugar as I could. I put him in therapy. We didn’t medicate at first, not for the first couple of years. At the time, I thought that having to medicate my kid meant we had failed as parents. Diet changes and behavioral modification should work, dammit! Though, I think, for me, the hesitation to medicate was really an ego thing: My parenting should be enough. Nearly all my thoughts and actions revolved in some way around ADHD. I so desperately wanted my son to be OK. I wanted to “fix” him.

If I could go back and talk to her, the first thing I’d do is give her a big hug. Then I’d tell her the three things I wish I’d known when my son first got his diagnosis:

Parents, you are probably more in need of therapy than your child. For some reason I convinced myself that cognitive behavioral therapy for my child would help him manage his ADHD. I suppose it helped a little in terms of helping my son understand his own mind and control his impulsivity a bit better. But what would have been much more helpful is if I went to therapy myself.

I needed someone to hold my hand and give me the skills and techniques to parent my child with compassion and patience. I needed a professional, objective third party to help me understand what my child was going through and how best to respond. After all, I was his primary caregiver, the first responder to all his impulsive behavior and lack of attention to detail. I needed the encouragement to count backwards from 10 when I found yet another wet towel on his bedroom floor or got a note home from the school telling me he’d neglected to turn in the last three assignments. I needed the reminder that yelling at him wouldn’t, couldn’t, help him. I needed the reminder that my child was not being deliberately defiant. I needed to get real comfortable with the idea that when you have a child who has ADHD, you repeat yourself a LOT. You just do. Getting mad doesn’t help. Yes, consequences do start to sink in, literally after years of enforcement, but yelling — an easy go-to when you’ve already said the same thing an infuriating 100 times — simply does not help. Having a professional to remind me of that on a weekly or biweekly basis probably would have helped.

You won't ever be completely sure medication is the right choice — until you try it. With ADHD meds, the effect is nearly instant. You’ll know in a matter of days whether the meds are helping or hurting your child and can react accordingly. For us, the doctor would generally want a report back within a week. I knew within twenty minutes of my son taking his first dose of ADHD meds that meds would be a game changer for him. I knew because of how he was talking to me. His thoughts were more organized than I’d ever heard.

But we quickly realized that this first brand of medicine gave my son painful headaches. So obviously we quit that one right away. Fortunately, the second drug we tried worked very well, clearing my son’s mind so he could focus in school and having no side effects besides suppressed hunger while medicated. We compensated for this by making sure he ate big, high-calorie breakfasts and dinners. We also opted not to medicate on weekends so he could be free to fill up on calories and nutrients.

Even with the trial and error, I still knew that medicating my son was the right choice. It made school bearable for him, for his teachers, for his classmates. He was still himself, but he was no longer disruptive and forgetful.

On the flip side, if the meds hadn’t worked, I think I would have had the same level of clarity and certainty. But I couldn’t have known until we tried. Prior to actually doing it, I worried so much that medicating my son was a horrible, lazy thing to do, or worse, that it would harm him. But the thing is, trying the medicine — with the support and supervision of your doctor, of course — is extremely unlikely to hurt your child. If it turns out not to be the right choice for your kid, well, you had them on a few days of medicine that metabolizes out of the system quickly and doesn’t have lasting side effects. It leaves the system, and now your question is answered.

Relax. This is the main thing I wish I could go back and tell myself. Even though it may feel like it sometimes, an ADHD diagnosis for your child is not the end of the world. Everyone has their quirks, and your child’s quirk just happens to be that they have a very special kind of brain. It is no worse or better than any other kind of brain despite its uniqueness.

Yes, an ADHD diagnosis means you will have to shift your routines and neurotypical ways of thinking about some things.

In fact, I have learned — and my son has also learned — that brains with ADHD are really cool. My son’s brain is fantastically creative, and I attribute a lot of his out-of-the-box thinking to his extra-busy ADHD brain. Yes, an ADHD diagnosis means you will have to shift your routines and neurotypical ways of thinking about some things, especially about discipline. Yes, it means navigating school and homework and extracurriculars will require an extra layer of thoughtfulness and planning.

But you will learn. You will learn and adjust and find your new normal, and so will your child, and everything really will be OK. You’ve got this. For further support, check out Additudemag.com, a comprehensive resource for kids and adults with ADHD and the people who love them.