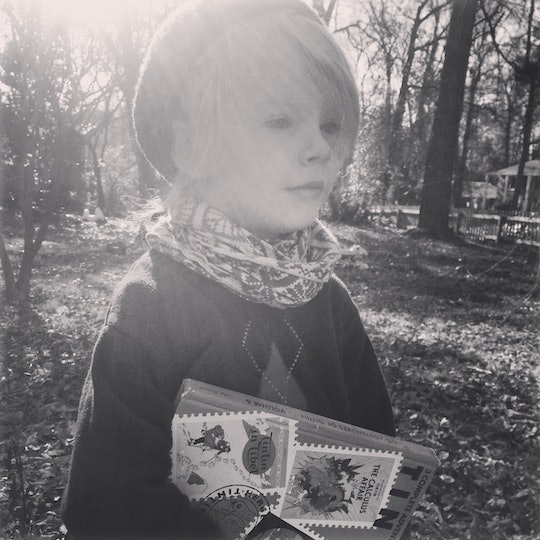 My Son Has ADHD, & This Is What Our Life Together Has Taught Me

I am straightening my hair. From the next room, I hear a thump, then a bounce, then a roll. “No jumping on my bed!” I yell to my 5-year-old son. I have yelled the same thing over and over again since this morning. My patient voice will last only so long. He continues jumping, despite my many pleas to stop, and I charge out of the bathroom. “I told you to stop. jumping. on. my. bed. You see the blankets on the floor? You did that. Who has to pick them up?”

“You do,” says a small voice, thick with shame.

“Get off my bed and stay off my bed!” I chase him out of the bedroom.

Afterward, I feel guilty that I’ve raised my voice. I know he can’t help it. He isn’t consciously disregarding and defying me. The urge to jump is just so strong, and the bed is so bouncy, and it’s just too tempting and suddenly there he is, jumping. It’s like someone short-circuited his impulse control. He doesn’t mean to disobey. Sometimes, it’s as if things just happen.

This is life living with a child who has ADHD. My oldest son is generally obedient, kind, and loving. He reads at a second-grade level; he can recite bizarre facts about prehistoric reptiles. He can parse out the difference between Jurassic, Triassic, and Cretaceous. He carries his almost-2-year-old brother to me when the baby’s hurt, arms trembling with the weight.

He also lives ADHD. And the spectrum of behaviors that come with his disorder.

There are times my sweet, obedient boy can’t stop himself from hanging onto things. We tell him over and over not to do it, but he does, in an absent way, often while talking to me. He pulls on the towel hangers. On hooks. He’s broken most of the curtain rods in the house. He needs to move his body, and there’s a convenient handle, and suddenly he’s hanging. He can climb the doorways like a spider monkey. We tell him not to, though we might as well be talking to the doorway.

My son, to put it mildly, has an obsession with screen time. He’d watch C-SPAN if he couldn’t locate the remote. When he watches, he’s locked in. Nothing penetrates the trance. One show ends, and he’s inevitably asking for another. When the answer’s no, he often throws a tantrum. He whines for TV as soon as we pull into the driveway, but sneakily: “We haven’t watched much today,” he’ll say.

We have to limit the amount of TV time he gets, partly because TV has been linked to a worsening of ADHD symptoms. The best solution I’ve found is to use it as a tool: we turn it on when he needs to relax. I put it off as long as possible (no cartoons at breakfast); he knows he can watch an agreed-upon two or three shows after lunch. This is rest time. Then the TV goes off. The schedule and routine help him, like it does in everything; ADHD children and adults work best in a highly structured environment.

He needs the same schedule and routine in school. We’ve chosen to homeschool, in part because of his ADHD, but also out of worry that a conventional school would force us into medicating him, something my husband and I are not opposed to, though we don’t think he needs right now. School provides balance, a set schedule done day after day, week after week. First, we read. He picks out the book. Then we do math. After a short break for swordplay or running, we do science or social studies. I try to make the lessons as hands-on as possible. Last week, we printed out a life-sized human skeleton and affixed labels to the bones.

When I lose my patience, the guilt hits me like a gut punch. Of course he needs to learn to cope. But it’s my job to help him, not shame him.

Subjects like reading can be trying. Not because of his ability, but because he stalls. He reads a sentence. This sentence reminds him of an idea he had yesterday about a book he read, and he needs to tell me about it. Another sentence. Did I know his best friend has a book like this one? Only touching him will take him out of these diatribes. He needs to be reminded, “We are reading right now. It’s taking so long because you keep talking.” He misreads words easily, rushing through them when he recognizes the first syllable. We have to start over a lot.

But there’s lots we can do to help him. We keep lots of ADHD-friendly toys in the house, especially swords and balls: kinetic toys that let him make big-body movements, which help calm him down and let his energy out. Legos give him the same laser-focus as television. And most importantly, we get him out of the house. School’s much easier if we’re moving at the same time, so a lot of lessons take place at the museum or the zoo. He needs to stretch his legs, to run. It can be a chore to constantly come up with new material outside the house, but since we let him drive most of his education, we simply move according to his interests.

We visit the park as much as possible. It’s a matter of sanity. Other kids generally like him for his energy and good nature; they don’t like him when his impulses make him misbehave: turning on the hose, for example, when everyone knows they aren’t supposed to. He makes acorn bombs and sword-fights with sticks. It can scare children, especially smaller ones, and I find myself explaining things to other moms. They mouth understanding. But their eyes say they don’t get it, don’t get him. It can be isolating. Luckily, he doesn’t understand yet.

Yes, we have to make allowances. The hardest is knowing that his impulses may be stronger than our warnings. It’s almost impossible not to lose your patience when you’ve said the same thing literally eight times, and yet he still disobeys on the ninth. When I lose my patience, the guilt hits me like a gut punch. Of course he needs to learn to cope. But it’s my job to help him, not shame him.

It’s difficult when people set him up to misbehave — for example, when he’s trapped in a room without toys and told to be quiet. He runs; he screams. All the kids might run and scream, but since he runs and screams the loudest, he’s the one people look to blame. I wish people weren’t so fast to see him as the troublemaker. It’s hard, to be the bad kid all the time. I worry it will affect him.

Luckily, mostly, it doesn’t. He’s bright, and sweet, and if he talks too much or jumps on the bed, well, he’s mine. He came with the ADHD. And we can do nothing but embrace it.