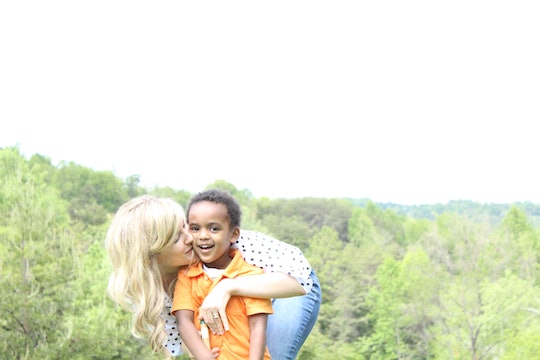 My Son Has Autism, & This Is What Our Life Together Is Really Like

My son, Mareto, was diagnosed with autism just three weeks before his second birthday. He's now 5 years old, and one of the biggest gifts having a child on the spectrum has given us is that we don't know life to be any different. Just like my daughter, who was born missing a few of her fingers but figured out how to eat, write, use scissors, and perform every other daily tasks, we don't know parenting without autism. To us, our life is ordinary. Autism is part of our story, and we're incredibly grateful for it.

Like most women with children, my day starts much earlier than I'd prefer. Some days begin at 4 a.m. because a noise, a bad dream, or the full moon will wake my son. Other days kick off later, at 7 a.m., and we're thankful for the few extra hours to "sleep in". People always ask what our morning routine looks like, but our schedule is identical to every other family's: we eat breakfast, we watch cartoons, play with toys, brush our teeth, pack up the lunch boxes, hand the kids their backpacks, and we're out the door and off to school.

It takes a deeper look to reveal how different our day-to-day is.

While our days might look the same from the outside, Mareto sometimes rejects what's out for breakfast. I pour him OJ instead. I get myself together and then head back into the kitchen for a second attempt. When he's made it clear that he doesn't plan to eat that morning, I accept it, moving on to his medications. Then I brainstorm the best way to get him to brush his teeth. With a sensory processing disorder (SPD), things like bristles on the toothbrush feel a bit more like steel wool. I make up a silly song, trying to make a game of it while he squirms and moves to get away from the sink. Somehow, we make it through, and then we move on to the next event: getting dressed. It takes about three times longer for Mareto than most kids his age, but I fight the urge to take over and verbally guide him through the steps, because I know that he needs to learn this life skill on his own. We work together and by the time his shoelaces are tied, sweat has formed on my brow. I make sure his lunch box is packed just right. If it isn't exactly the same every single day, he won't eat.

On the way to school, we keep things light and happy. Going to school is still scary for Mareto, and he cries each morning when it's time to go. So we take our cues from him, letting him look out the window, sing silly songs, or listen to the radio. Whatever will keep him smiling and calm. We pull up to the curb at school and his aid greets him with a hug and a smile. I get a lump in my throat, even now, when it's time for me to kiss him goodbye.

I fight the urge to worry on the ride back home, and sometimes, often, I lose. I wonder if the other children are being kind to him, whether or not he's communicating his needs, if he's frightened or overwhelmed.

I make it back to the kitchen and see the pile of papers in the corner on the counter. I sit down at the kitchen table, phone in hand, and call our insurance company to make corrections and ask about coverage. I update the calendar with appointments for Mareto and try to space out the visits with each specialist so they won't be too overwhelming for him and for all of us. I pick up prescriptions and a new food I hope Mareto will at least smell, maybe even taste. Then I flip through the information given to me about new therapies and programs that could help him learn, grow, and build life skills. Horse therapy seems amazing, and so does swim therapy, but I go through our budget and the numbers don't agree. I set those things aside for another time, another year.

Somewhere between all the paperwork, I fit in the daily chores, I play with my daughter, run errands, and focus on my own career. Some days the only thing there's time for is a princess movie and toe-nail painting. The chores and the paperwork can wait.

In the afternoons, I pull up to the curb as Mareto runs to the car. It never ceases to surprise me how I've missed him in the few hours he's been gone. Sometimes he'll use words to tell me about his day. Other times, there are only tears. At one point, Mareto was labeled non-verbal, but has progressed so much with speech therapy that we dropped that label. When he becomes extremely upset or stressed, his ability to verbally express himself disappears.

We go home to build train tracks, talk about Hot Wheels, look at the Ninja Turtles catalog, and read books. Moments of silly, sheer fun escalate to sheer panic at the drop of a hat. One night while I was washing dishes something caught his eye outside. He ran out the front door after it before I could stop him and I didn't catch up until he was at the end of the street.

As I fix dinner, I glance over and watch him coloring at the kitchen table with his younger sister and I feel overwhelming pride for these two precious gifts I've been given. My to-do list remains half finished, and dinner will be a struggle, but I know how lucky I am.

When it's time for bed, Mareto refuses the first pajama top I've laid out for him. So we go through three more — one is too scratchy, the other too tight, and the last is too ... something. Finally, he settles on the first shirt we tried. I read him the same book we've read for the last eight nights, because Mareto loves routine and consistency. I lay beside him for however long it takes for his body to give way to sleep — some days it's 30 minutes; others, it's two hours.

Raising a child on the spectrum is not a burden or a disappointment. I don't view my son as difficult or a challenge. Mareto is simply experiencing the world from his own unique perspective. It's not wrong, it's just different. I don't expect him to fit into the box of how things should be, so we shift and adjust our expectations to fit his mold. It's opened my eyes to a new way of living; a simpler, more sincere joy.

I can't imagine my world feeling complete or even colorful without him. Mareto has taught our family how to grow, change, shift perspectives, give, and love better. We're better people because of him.