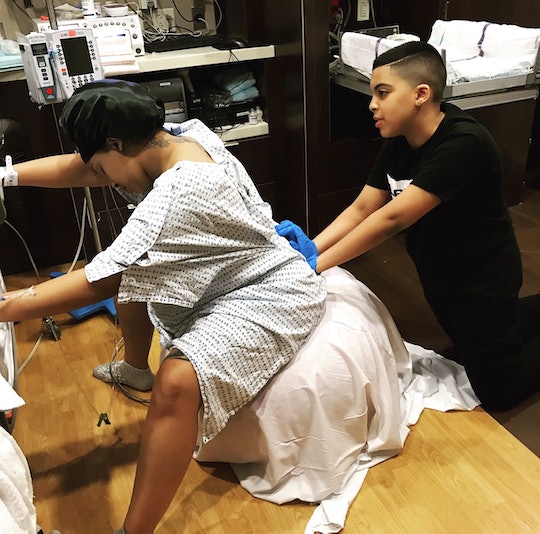 My Son Helped Me Through Labor, & I'm So Proud

I kept my pregnancy secret till I went to the doctors to confirm it: I was eight weeks along. I reached out to the father and he wanted no part of it, wanted to pay for an abortion. I had no one else to talk to or confide in. Then I thought of my 11-year-old son Daylen. I raised him well and knew I could go to him, so I explained what had happened, and told him the options were either abortion, adoption, or to keep the baby. His response blew me away. He said, “Mom we got this. I always wanted a sibling. If that guy wants no part, he’s a coward." I sat there amazed, listening to my son. "It’s his loss," he said. "I will be there, Mom, don’t worry.”

My pregnancy became something more bittersweet, especially when I found out I was having a girl, just like I had always wanted. I had a few friends that lead me to believe they were supportive of my decision to have the baby, told me they would be there for me, only to realize when I needed them that no one was there. I started having doubts again. How would I raise this baby without a village? I always came back to the thought, though, that my son will be proud and happy, and that’s all that matters.

Through the whole labor, Daylen didn’t leave my side.

Daylen came to majority of my appointments and sat in the waiting room just to be supportive. He wanted to see his sister any chance he could, so he was allowed to come into the ultrasound appointments and his face would brighten up every time when he saw her on the screen. The technician would always print him his own picture and he would put it in his school folder to show his guidance counselor and friends. Then Christmas came along and I was down because I am always a little down through the holidays. To my surprise, Daylen had used his allowance to buy his sister her first shoes, bibs, and socks. After that nothing seem to matter — even though I felt I lacked support, I had everything I needed.

As the weeks went by my pregnancy was going pretty good. I had no issues, I was active until I hit 34 weeks and was told I had gestational diabetes. I was told to change my diet, and became anxious and depressed knowing I was getting close. At 38 weeks, I was told I needed to schedule a C-section because my amino fluids were low. I declined and said I’d leave it to the higher power. I was determined to have a vaginal birth because with Daylen I had a traumatic emergency C-section. I also wanted to experience a vaginal birth since, in my heart, I knew she was going to be my last child.

I wanted Daylen to learn and experience it with me as well. From that day on, I tried natural ways to go into labor. I took supplements, made natural drinks, and ate differently. Daylen would go to the store for me and get whatever I needed. At this point I was tired all the time and on bed rest. He noticed the stress I was under and would insists on rubbing my feet or my back just so that I felt a little better.

Days before my due date, I decided to go out and run some errands — I wanted to make sure I had everything I would need when the baby got home. I didn’t want to bother Daylen, as I felt he was already doing so much. Well, my water broke in the supermarket parking lot. I went home, waited for Daylen to get home from school, and drove us to the hospital.

The life of a single mother is sometimes so hard and you want to give up, but then you look at the little people you created.

Through the whole labor, Daylen didn’t leave my side. He rubbed my back when the contractions would come, and sat up all night with me just to make sure everything was going smoothly. Went to get me water and crackers when I needed. He was so hands on and I was proud! Over 30 hours in labor and both of us were exhausted.

Ultimately, I had to give in to a C-section, because I wasn't dilated enough and she had shifted position. On June 13, I had my beautiful daughter Ava at 3:34 a.m., weighing 5 pounds and 9 ounces. Daylen was there up until I went into surgery. As soon as I was back in my room and settled, my little man was with us. Just the three of us.

I wouldn’t change it for the world. This experience had its ups and downs but in the end I wouldn’t change it. It’s been three months since Ava was born and the unbreakable bond of a big brother and little sister is priceless. The life of a single mother is sometimes so hard and you want to give up, but then you look at the little people you created and everything just seems to make sense.

More Like This
These Darling Baby Boy Names All Start With The Letter "D"
Can The Way You Sleep Really Turn A Breech Baby?
From Captions To Gifts, These Are All The Kindergarten Graduation Ideas You Need
Can You Help Your Baby’s Hair Grow?