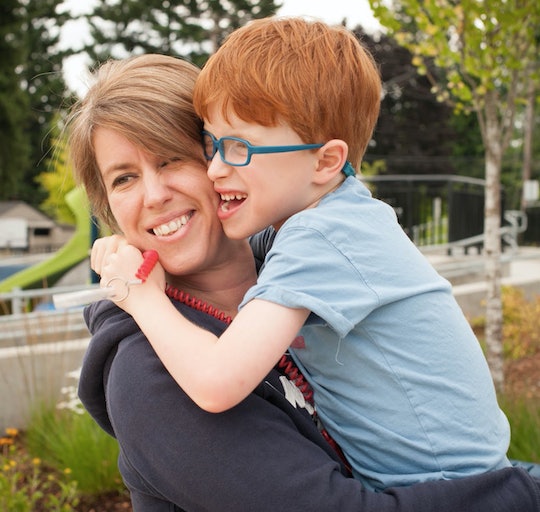 My Son Is Nonverbal & Has Autism & This Is What It's Like

My first-born son, Mac, has been a little firecracker from the very moment he was placed in my arms. Though we experienced a tricky birth and I had a long recovery in the days and weeks that followed, Mac has been feisty for as long as I can remember. Mac is intense in every sense of the word, and he feels things incredibly deeply, whether he’s happy, sad, or any emotion in between. He’s so much like every other child — full of life, full of excitement, full of passion — except Mac has Autism and he’s completely nonverbal.

At the age of 2, Mac had learned roughly 100 words, but he never really used language to be social. He used the words to identify things: chair; mom; eat; sit. Knowing what I know now, this was probably the first red flag I overlooked, but at the time I thought Mac was like any other kid. I thought he’d continue to thrive. But Mac never slept well. He didn’t play with toys like other kids his age did, and I don’t think he never sought out adult or peer interaction. Mac also suffered from repetitive behavior, but it never occurred to me that when you lined up all of these symptoms, they’d show something much bigger at work. It was only when Mac began to lose his language that I realized something wasn’t quite right.

Mac was diagnosed with autism at 3 years old, not long after we moved from the UK to the United States. Mac is also in the growing percentage of children with autism who have also had a severe regression. (A study of 351 children with autism performed by Autism Speaks in 2008 found that 46 percent of those children had regressed.) Though he had roughly 100 words at the age of 2, he soon lost them all. But his regression wasn’t overnight. One day, Mac just started chewing things — books, plastic paper; anything he could get his hands on — and as his need for sensory stimulation increased, his language depleted. He regressed for a long time, and then massively plateaued right around the age of 5. His loss of speech has, and will always be, incredibly painful for me. Though our new normal is one without words, I won’t ever be able to forget the sound of Mac talking. I still remember his words.

Life with Mac is filled with noise: gasps and giggles, delighted shrieks and squeals. His sounds provide the soundtrack to our lives; the steady beat the rest of us drum against.

After Mac lost his words, it ushered in a period of challenging, destructive behavior for him. He was acting out because he’d lost the ability to communicate, and we were both equally frustrated at the other’s inability to understand what the other needed and wanted. It was probably the darkest time in our lives, and there were moments when I didn’t know if things would ever get better. During my pregnancy I just assumed that we’d venture down the path everyone else does. Despite everything I had planned and prepared myself for, I'd never planned for this.

The biggest misconception about life with a nonverbal child is that our home is quiet. In truth, it’s anything but. Mac is the noisiest child in our house and on the street. I often feel sorry for the new people in the homes built behind ours, because they’re privy to Mac’s 100-decibel happy screech day and night. He also sings, which is wonderful because it allows me to hear his voice, and he has a better singing voice than any of us. He does this lovely choir boy-style singing and then sometimes drops a few octaves and we get the death metal version. Life with Mac is filled with noise: gasps and giggles, delighted shrieks and squeals. His sounds provide the soundtrack to our lives; the steady beat the rest of us drum against.

Taking care of my son does require added time and patience, and it’s not without its own frustrations, but caring for Mac also reminds me of the most primal relationship between a mother and her child: he needs, and I give. Again, and again, and again.

Because Mac is nonverbal, he receives speech therapy by using his iPad. He’s learning to sign to communicate, and he receives occupational therapy for fine and gross motor skills as well as applied behavioral analysis (ABA) for behavioral therapy. He goes to school just as any other child would and has home ABA therapy every day of the week. It might seem strange to some that Mac would have speech therapy considering he doesn’t speak, but it’s all about learning alternative forms of communication. As a family, we take trips every weekend to get us out into our community, which helps him get used to different sensory surroundings and helps teach him to communicate his needs outside of our home setting. We go all over and the more we do it, the more he loves it. With his happy screech and his “chewie” at his side, he doesn’t shy away from life. He wears his autism on his sleeve for all to see and I love him for that.

When Mac is unwell or in any kind of pain, it’s difficult for me to figure out what hurts, and he can’t yet point to it the location or communicate what’s wrong. But over the years I’ve learned how to cope. Parenting Mac without clues is no different than taking care of a baby. I have to go through the normal steps: Does he have a fever, or the presence of any rash?; is he eating?; is he pooping? I go over our day with a fine-toothed comb and mull over every detail as deeply as I can remember it, searching for clues that will help me figure out what is wrong. Taking care of my son does require added time and patience, and it’s not without its own frustrations, but caring for Mac also reminds me of the most primal relationship between a mother and her child: he needs, and I give. Again, and again, and again.

Mac isn’t a child who is bursting to tell me an in-depth story about trains or airplanes but just doesn’t have the words. He’s a vibrant little firecracker who stores his own genius within. And when he lets you into that world, it’s amazing.

Though life with Mac is full of rewards, it’s also terrifying at times. Mac is a wanderer. If he could get out the house, he would, and my biggest fear is that no one knows him like his family and his team of therapists. I live on high alert most of the time because of this, and although it’s exhausting, it’s become my norm. When I see “typical” kids stick by their parents, I used to feel a pang of sadness, but then the present, and my attention to Mac’s needs, pulls me back. I constantly wonder what would happen to him if I lost track of him, even for a moment. Who would help him? Would he know how to get home? He got out of the house a few summers ago and it was the longest and worst 20 minutes of my life. I went so far as to purchase a GPS device for him. Though Mac is, in many ways, very much a child, the severity of his autism means that he is, in so many more ways, not like anyone else.

The first time he swiped to a different screen on his iPad to choose a preferred food item during his therapy, he almost had me in tears.

Although buying a GPS device for your child may seem like overkill to a lot of parents, it’s not for me. Mac is a child who would wander and not know how to get home. I even have an earthquake emergency kit that contains a harness to keep him attached to me should the house fall down. That’s the depth of thinking I go through, and if you had to ask what keeps me awake at night, this would absolutely be it.

Mac is 7 now and over the last few years, life has settled down for us. We found our own ways of communicating through signing. Out of the blue last summer, Mac started patting parts of his body when I asked him if he was hungry. I had no idea what he was doing until it dawned on me that he was trying to sign. This was a huge step forward for him, and we quickly integrated it into his school and home therapies. He now has four or five signs that he uses for food, trampoline, swing, and others. After the small successes with sign language, we tried to use an iPad to help him communicate. Despite the fact that joint attention (which, according to Autism Speaks, occurs when a child engages a parent or caregiver in sharing communications by pointing to things of interest or directing another's attention to objects) is hard for Mac, we’re making slow but steady progress. The first time he swiped to a different screen on his iPad to choose a preferred food item during his therapy, he almost had me in tears.

Mac isn’t a child who is bursting to tell me an in-depth story about trains or airplanes but just doesn’t have the words. He’s a vibrant little firecracker who stores his own genius within. And when he lets you into that world, it’s amazing. His eye contact is so good I sometimes think he can see straight into my soul. Mac loves fiercely and makes strong bonds with those who care for him. During our end-of-the-day hug at bedtime, we look into each other’s eyes and in that moment, we don’t need words. We have each other.