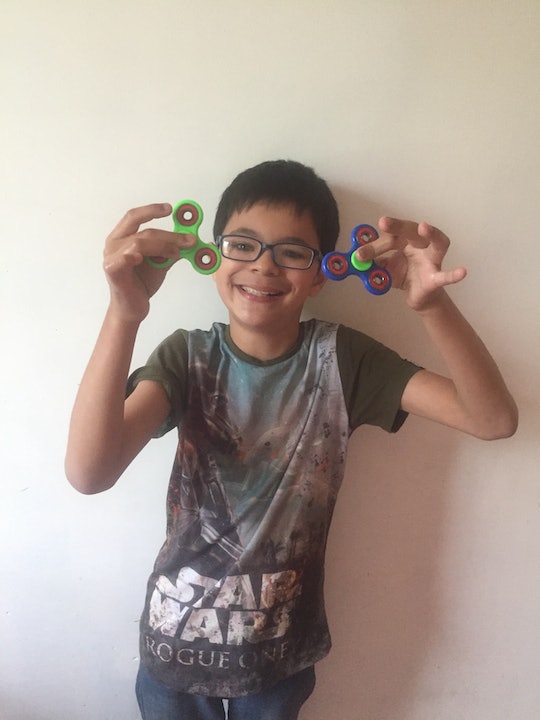 When my son was a baby, I remember thanking God for ceiling fans. He could stare at a slowly spinning fan for what seemed like hours at a time. By the time he was 11 months old, he would sit on my yoga mat and spin the wheels on his upturned Tonka truck for hours, happily cooing as he spun the wheels faster and faster. I thought this was adorable.

At the time, I had no idea that other kids didn't sit and stare at spinning truck wheels like my son did. It didn't strike me as an issue that my son could dismantle and rebuild his toys, but he still hadn't yet waved to me, or clapped, or pointed to things he wanted. At his 1-year checkup, however, his pediatrician suggested that he be evaluated for autism by a pediatric psychologist, noting that his inability to wave, clap, and point were red flags for an autism spectrum disorder.

A few months later, the doctors determined that my son had sensory processing disorder, which affects the way his body perceives tactile input. He was also diagnosed with ADHD and savant syndrome, which for him meant that he could read at an extremely early age. The psychologist also noted that he exhibited many traits of Asperger's Syndrome, such as the inability to maintain eye contact or recognize emotions. I sat in the car after that evaluation after strapping him into his car seat and wept. I wasn't sure what it all meant, but I knew that my perfect, sweet, squidgy ball of love was probably going to have a tough time in life.

Today, my son reads faster than most adults. He processes words at the rate of most college students, and he can recall long lists of numbers without a thought as to why. To him, learning is a joy. He jokes that Google is better than pizza or Xbox. However, because of his ADHD and sensory processing disorder, the nitty gritty of the work is nearly impossible for him. Unless he's just reading or doing math, he gets extremely distracted very easily. At home, he has a little old-school style desk in his room, where he can sit and do his homework alone, but sometimes even complete solitude isn't enough for him to focus.

I first found out about the fidget spinner craze about six weeks ago, when my husband brought home this weird-looking toy. It looked like a Celtic triscelion, or a triad of three spirals, with a ball joint in the center. My husband explained to me that the toy was supposed to help calm kids down. He showed me how it worked. I have ADHD, so for me it felt a bit like I was holding a cup of chamomile tea. It immediately calmed me down, so I wondered if my son would benefit from it as well.

As it turned out, thanks to YouTube, my son already knew all about fidget spinners. When we gave it to him, he told us about how he could modify and customize the "basic" models, and he told us all about the cool tricks he could learn. He took to it instantly.

For him, a fidget spinner isn't a toy at all, so much as it's a focus for his energy.

Although fidget spinners have been banned in many classrooms, with teachers deeming them a distraction, my son doesn't use it that way. For him, a fidget spinner isn't a toy at all, so much as it's a focus for his energy. It helps him find his center and his sense of balance. He doesn't sit at the table with it, or come home and rush to play with it after a long day at school. Instead, he quietly takes it with him into his room while he does his homework, only taking it out between questions or problems that are making his mind lose its focus. His fidget spinner toy spins on a tiny axis, seeming to point to his true North.

I used to have to remind my son to focus on his homework every few minutes, but now he is able to focus on his own by pulling out his fidget spinner and staring into the spinning plastic. That is a big win for us. He's had fidget toys before: cubes, bouncing balls, stress-relieving spheres that would mold to his grip. He's had things to chew and things to play with. But he didn't have anything that spun, and that seems to be the key for him. Since his days as a baby, gazing upon the ceiling fan in our overheated apartment, the rotating movement has always drawn him in.

It's been 7 years since my son received his diagnosis. He still receives five separate therapies a week, including two sessions of speech therapy, two sessions of occupational therapy, and one session of physical therapy. School is really hard for my son. He has very poor somatosensory cortex functioning, which means that he has a difficult time understanding where his body is in relation to other objects and people. It's hard to make friends if you constantly knock over their things, or run into them at gym. It's hard to feel normal when your body tells you that you need to be bouncing or stomping on the ground with your bare feet, instead of watching the movie like all of the other kids. But the fidget spinner has proven to be a way for him to harness his focus and energy.

I know there's only anecdotal evidence supporting the benefit of fidget spinners. I know there isn't much research to support the idea that they are helpful to kids with ADHD and autism (though it's worth noting that I'm far from the only parent to report that it's had such effects). And yes, I know they're labeled a "distraction" in the classroom. But I also know that my son did 20 math problems in a row without crying or begging me to let him stop. I know that he finished a book report and didn't tell me that he didn't need to do it because he knew the book already, as he usually does. I know that I see his eyes track the silver of the weights at each arm of the fidget spinner with the same rapt attention he gave the ceiling fan that made him so happy, and I know that I am grateful that it has helped him.