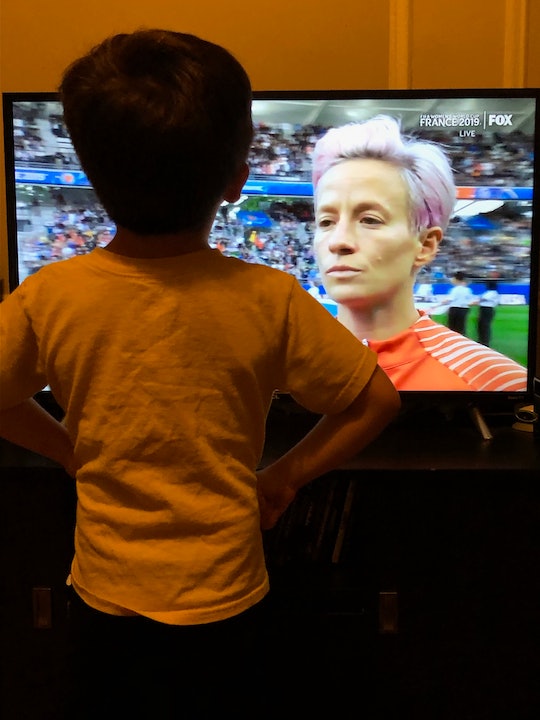 There are very few things in this world that my son finds more enthralling than the games on his Kindle. But for the entirety of the 2019 Women's World Cup, my son was glued to a much larger screen. From the first match and the U.S. women's dominant performance against Thailand (13-0), to the final goal in the World Cup final against the Netherlands that solidified Team U.S.A as back-to-back World Cup Champions, my son was captivated by the women on the field. "Mom, I want to play like those girls," he said many times over, his eyes wide and his smile mischievous. "They're awesome."

And they are. The women have won four World Cups — ‘91, ‘99, and consecutive wins in ‘15 and ‘19 — making them the most winningest international soccer team in the world. And what makes them particularly entertaining, to 4-year-old boys and 32-year-old moms alike, is that they act like it. After each goal they celebrated shamelessly, sipping tea and standing tall with their arms and their chests out, daring the Twitter trolls — including the president of the United States — the skeptics, the critics, the Piers Morgans, who are "all for celebrating success but the insufferable smuggery of this lot is becoming very, very annoying," with a bravado usually reserved for white male athletes (and for Black athletes who follow the rules and don’t overstep).

Right now, thanks to the U.S. women's team, playing like a girl means becoming a world champion — and of course I want that for my son — but it also means succeeding while taking on the most powerful man in the world, the social media trolls he knowingly inspires, systemic racism (team capitan Megan Rapinoe was the first athlete outside of the NFL to take a knee during the national anthem, and refused to sing the national anthem during the World Cup tournament) and LGBTQ discrimination (Rapinoe told several news outlets after winning the world cup, "Go gays. You can't win a championship without gays on your team. It's never been done before, ever. That's science, right there," per CNN).

Oh yeah, and it would also mean winning while fighting for equal pay. And I want my son to one day join that fight even more than I want him to score goals and hoist trophies.

We need to constantly look within and challenge ourselves to be better so everyone else can be better around us.

Twenty-eight members of the team filed a discrimination lawsuit against the U.S. Soccer Federation in March, as was reported by USA Today, alleging gender discrimination in the amount they're paid, the conditions of the fields they play on, and the accommodations they are afforded when they travel. In a copy of the lawsuit obtained by The New York Times, the players write:

The USSF, in fact, has admitted that it pays its female player employees less than its male player employees and has gone so far as to claim that “market realities are such that the women do not deserve to be paid equally to the men.” The USSF admits to such purposeful gender discrimination even during times when the WNT earned more profit, played more games, won more games, earned more championships, and/or garnered higher television audiences.

The men's team has never won a World Cup. They didn't even qualify for last year's World Cup. But, according to The Washington Post, a female soccer player who played and won 20 matches is paid just 89 percent of what a male soccer player who played and won the same amount of matches would be paid. The pay structures as they stand right now are not the same (the women can sign contracts that include an annual salary of $100,000, as reported by USA Today, while the men do not receive annual salaries but can expect higher bonuses and guaranteed money, even if they lose) but, as alleged by the lawsuit, when the chips fall the men have more — much more — than the women.

"I think we knew that this win ... was going to be bigger than soccer." Rapinoe told CNN's Anderson Cooper on Tuesday evening. "We need to constantly look within and challenge ourselves to be better so everyone else can be better around us."

The U.S. Women's Soccer Team showed the world — showed my 4-year-old son — that you can win, you can celebrate those wins, and you can fight for those who don't feel like they've had a win in a very long time. The LGBTQ community — who have been a target of this administration via a ban on trans military members and the right for medical providers to refuse treatment to LGBTQ people under the guise of religious freedom — might not feel like they'll be hosting a proverbial trophy anytime soon, but on Sunday they were able to watch one of their own hold three. Black people and people of color — who have watched in pained horror as police officer after police officer are acquitted in the shooting deaths of unarmed Black people — might not feel like they have very many allies, but on Sunday they watched the first white professional athlete take a knee to protest systemic racism and police brutality ascend to a larger platform. A platform she, clearly, intends to use.

I hear a young child who has found a group of real-life superheroes who fight for real-life justice at a time when there feels like there are more bad guys than good guys.

I hear a boy who, because of a group of women athletes, won’t be afraid to fight for a more inclusive, kind United States. The United States the current soccer world champions proudly represented and simultaneously are fighting for.

More Like This
Mom On TikTok Asks Daughters Why They Want To Be Boys & Same, Girls, Same
35 Children’s Books Starring Black Characters
14 Recipes For Sick Kids When Everyone's Tired Of Canned Soup & Crackers
72 Hilarious Valentine's Day Jokes For Kids
What Parents Are Talking About — Delivered Straight To Your Inbox