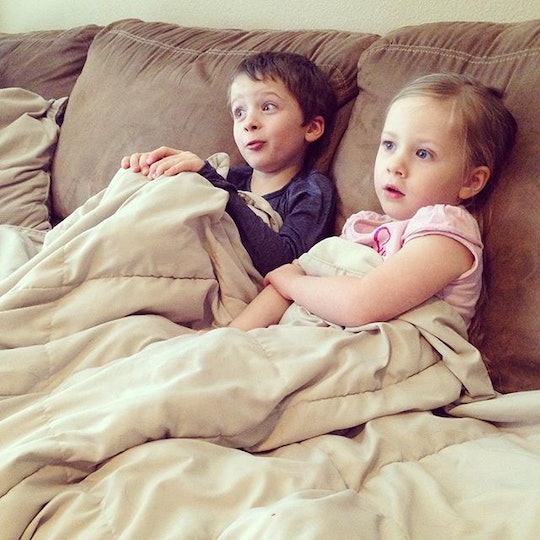 My Sunshine Babies Helped Me Get Through My Loss

I thought nothing would ever feel worse than the day I had my first miscarriage. It was very early on in my pregnancy, before I even made it to my 8-week appointment, but the pain was deep and real. Soon after, when I became pregnant again, I was cautiously optimistic while still grieving my loss. Then I had another miscarriage.

The day I found out I had lost my baby at my 12-week appointment was the beginning of one of the darkest times in my life. I remember the moments leading up to my midwife revealing the motionless ultrasound with no visible heartbeat: the sinking feeling in my chest, how hard it was to breathe. I remember the painstaking wait for my husband to arrive at the hospital, the impossibly long drive home after scheduling my D&C the next day. Once the procedure was done, I felt profoundly empty. The only thing that kept me from crumbling was the knowledge that my two other children, a.k.a. my sunshine babies, would help me keep going.

Thankfully, my two children were visiting their grandmother for a few days when I found out about my miscarriage, allowing me to grieve loudly and openly without worrying about frightening them. They were not there the day I had my D&C, or the day after, which gave me a brief but much needed healing period. But soon after my D&C, I found myself wishing they were home, as I missed them deeply now that my pregnancy was suddenly over.

When they returned home, I hugged them close and never wanted to let them go. I realized, perhaps for the first time, how lucky I was to have them. I had taken my pregnancies with them for granted, never imagining that something like miscarriage could happen to me, let alone happen twice. I began to wonder if I would ever give them the sibling I had so desperately wanted. I wondered if I would even want to try. The darkness that had spread across me the moment I saw that ultrasound seemed insurmountable. I didn’t even know how I was going to survive.

But having my sunshine babies by my side helped me live through the aftermath of miscarriage in a way I couldn’t have otherwise fathomed. Having them back was not only good for the deep loneliness I had felt in the immediate wake of my miscarriage, but it also helped keep me occupied. There was less time to ruminate when I was chasing the two of them around the backyard, less room for sorrow when I was tending to their constant needs. They kept me moving, and movement was key.

Still, there were slower moments when I was able to sit back and enjoy the sight of the two of them playing together. Then the pain would hit me sharply. I would watch them run across the grass at the park, and I could feel that someone was missing. I would settle in to read to them at night, and I would ache for the third little body that was not there.

My children showed me that this kind of love was worth any pain.

While these moments were difficult, they were also eye-opening. They allowed me to see past my fear of another loss and realize that, for me, trying to get pregnant again was worth it. If it meant I'd have another chance to have this deep love in my life, the love I felt for my sunshine babies, then of course it was worth it. I would go through this loss over and over again if it meant that in the end, I would end up with another baby that would fill me with this immeasurable sense of purpose, this insatiable will to live. My children helped me move forward in love and not fear. They showed me that this kind of love was worth any pain.

When my two sunshine babies held my rainbow baby at long last a year later, I cried. It was as if the missing piece of the puzzle was finally put into place. And I was so, so grateful that my sunshine babies had helped propel me forward, that they had shown me how badly I wanted this baby. I was so grateful they had given me the courage to try again, to love again. They had reminded me that the love of another baby was worth it.