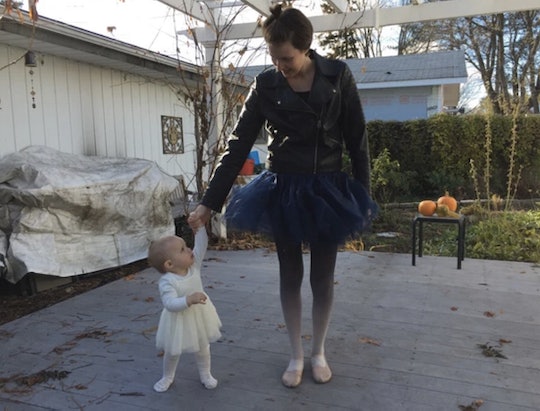 However you might feel about her parents, you have to admit that North West is undoubtedly the coolest baby in the world. She’s rocked more than one look that I, a supposedly adult person, would die to have in my size. In fact, as much as I admire some of Kim K’s fashion choices, her kid’s wardrobe is much more my style.

There’s not much that Keeks puts on her baby that I wouldn’t put on mine (except, maybe this). North’s style is edgy and feminine and cool and fabulous. Her taste is simple, and there’s never too much going on on any given outfit. She’s like, ready for Met Gala and an afternoon on the couch at the same time, and for that, I will be forever envious. It’s too soon to know whether or not my baby will be into girly stuff; if she is, I’ll support her all the way. But for now, I mostly project my style onto her, and my style veers more towards masculine/gender neutral.

I’m not the first adult to emulate little Nori’s style. But I might be the first to try and turn her sometimes outlandish outfits into mommy-and-me perfection.

From The Closets Of Babes: The Experiment

I’ve never made a conscious effort to dress my daughter and I up like twinsies before, but for North West’s looks, I’m willing to go the extra mile. And if that means we both get to look like Nori, then count us both on. For a week, baby and I were going to take every style cue from the reigning queen of infant fashion: North West.

Because I’m a single mom who only works part time, I don’t have a ton (read: any) money to throw around on fancy new clothes. So the really hard part of this experiment was trying to emulate these outfits using only stuff we already had in our closets. Kind of like a really intense game of dress-up, without the princess costumes and vampire capes.

This is what happened.

I remember seeing this photo of North and Kanye when I was pregnant and thinking, This is so cute! This is how I want my kid to dress! It really struck me that she was wearing these plain, grey pajamas. I mean, think about it. How often do you see a kid wearing pajamas that aren’t really, well, baby-ish?

I’ve also always dreamed of recreating this photo. It’s just so sweet! So we started our experiment by kind of breaking the rules. You could argue that I’m dressed up like Kanye here, not North. But since the two of them are dressed alike, I feel like it works.

There aren’t a lot of grey baby clothes, especially in the baby girls’ department. Her top and bottom are both from the boys’ section at Walmart. My t-shirt is from Target, and I’m pretty sure I got that gold chain as a gift for my first communion.

We weren’t really going out on a limb with this look, but needless to say, we were comfy. This look was simple and not much different from what we wear on a daily basis. And I have to admit, I kind of loved matching my girl.

I was pretty worried about this one, mostly because of the white blazer with gold buttons. North’s is custom (of course), and I couldn’t find anything similar, even when I looked online. You’d think I’d be more concerned about the tutu, but I took ballet for many years and kept a few of my costumes, so I had that covered.

I eventually ended up going with a long sleeved onesie from Old Navy for her, underneath this cute ballerina dress by Guess Baby, which was actually her Easter dress this year. It’s not a custom Balmain blazer, but it’s still pretty darn cute!

I didn’t have anything white, so I went with a bit of a goth ballerina look, completed by my ombre tights and TopShop leather jacket, which has been a staple in my wardrobe for years.

It surprised me how uncomfortable I was in this outfit. I took ballet for over a decade. I wore a lot of tutus, and I always felt fine in them. But that was back in high school, and since then, I’ve learned a lot about myself and my gender identity. I’m definitely more comfortable in “masculine” clothes. The leather jacket felt like a safety blanket!

I think it’s good to show my daughter that it’s OK to get out of your comfort zone sometimes, as long as you’re still having fun. And I was!

This was definitely the outfit I was most looking forward to recreating. I mean, it has everything: denim on denim, a black t-shirt, aviators. Neither of us had any acid wash, but I think we pulled it off anyway.

Both of our denim jackets are thrifted; hers is a size 5. Oversized for sure!

At this point, it was getting a little exhausting trying to figure out how to “style” my tiny child with clothes we already had. We were still having fun, but it did make me wonder how long it takes Kim, Kanye, and North to get out of the house on a given day. I find it difficult enough to put together outfits for myself, and styling them with accessories. I can’t imagine doing that for myself and my baby. Especially considering how much she wiggles around when I’m trying to dress her!

How amazing is it that every time Kanye puts out a clothing collection, North gets a custom outfit? This hoodie-and-legging combo is to die for. Unfortunately, it’s in a really unusual color, which is a big part of what makes it interesting. (And also impossible to find in any store anywhere — and I live in Canada!)

Neither of us has any dusty-pinky-taupe in our wardrobe, and because of that, this look probably deviated the most from the original out of everything we tried. We’re both wearing leggings with American Apparel hoodies, and I think we’ve captured the spirit of chic, athletic comfort of Nori’s original.

Having said all that, I was pretty tired at this point, and I was kind of relieved that we didn’t have anything to recreate this look too thoroughly. I’m betting that North took a lot longer to get dressed than we did.

To be honest, I had no idea how I was going to do this. I mean, that is a black fur cape. I have never owned anything that came close to resembling a black fur cape, and my child certainly hasn’t, either. We’re vegetarians, for goodness sake! So, I had to cheat a little.

At first, I was going to try to DIY something out of this pillow. But then I saw this little faux fur shrug with the Christmas dresses at Walmart, and I thought it was just too perfect (and under $10!).

I’m wearing this amazing sweater that I got for Christmas a couple years ago. It’s not fur, but I think it has a similar, oversized effect. We both finished our looks with simple black leggings.

This one outfit was the most fun, for sure. I never, ever would have even looked at this faux fur shrug sideways if it wasn’t for this experiment, and I think it’s so cute on her! With a dress it would be too much, but with a simple t-shirt and leggings underneath, I think it really works.

One thing we did have down was shoes that look like kitties, even if they were the wrong color.

Am I Raising A Style Maven?

In many ways, my daughter and I are as far from Kim Kardashian and North West as you can get. I mean, we’re lower middle class Canadians who live in the middle of nowhere, and sadly, we are not related to Kanye. But Kim and I are both moms, and Nori and my daughter are both babies, and those are two pretty great equalizers.

I’m very careful about how much I spend on baby clothes, because it’s not in my or my daughter’s best interest for me to waste a lot of money on something she’s only going to wear for a short time. I’ve always sworn up and down that even if I had money, I still wouldn’t spend a lot on baby clothes. This experiment taught me that that’s probably not quite true. It’s fun to dress your kid up! If I had the money to spend on fancier clothes for her, I’m not sure I’d be able to resist.

But the most important thing I learned from is that hanging out and doing random, silly things with my kid only gets more and more fun as she grows, and I can’t wait to see what we’ll do next.