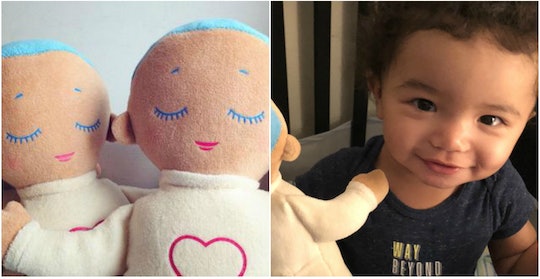 My son has had his sleep issues. At 10 months, he was sleeping through the night, and rarely waking up in the wee hours. He would have a bottle, then get his teeth brushed, and then I would rock him to sleep in a dark room with classical music playing from an old iPhone. I rarely had trouble getting him to sleep, and honestly, I didn't mind having to be there holding him while he nodded off. But nap time was another story. Three or four times during his nap, he would stand up and cry out for me. I would go in, pick him up, cuddle him, put him back down, then leave him to fall back asleep. There was a gap in his ability to self-soothe, and I didn't want to do cry-it-out to fix it. But what other options are there? As it happened, my editor asked if I would test-drive a specialized toy designed to help tots sleep.

Designated as a "sleep companion" for preemies, babies, and toddlers by an entrepreneur in Iceland, the Lulla Doll puts out the sounds of breathing and a heartbeat. It's basically a lovey with added features designed to soothe babies and toddlers when their parent cannot be with them. As the creator, Eyrún, explains on the website, "the idea of the Lulla doll was born when my friend had her baby girl prematurely and had to leave her alone in the hospital every night for two weeks." It is also designed to look somewhat genderless and post-racial, so it appeals to all kids.

We co-sleep — my son's crib is in our room, which means we are present for his night sleeps but not his naps — so I felt like maybe he could use some "closeness."

When we first got the doll in the mail, my first impression was... it was adorable! As I unwrapped her, my son Kai watched on from his crib, standing up. I think he assumed it was for him because he got excited! He started bouncing up and down in his crib, holding on to the front railing. I took her out of the little drawstring bag and gave her a once over. I thought about getting Kai a doll previously, but I didn't find any of them cute. Some of the dolls in the toy section in various stores were either not age-appropriate or looked creepy to me. The Lulla Doll was super sweet-looking, with a face that said "you know you want to cuddle up and go to sleep."

I didn't turn her on or even read the instructions, because Kai was too excited! He grabbed her, hugged her, and started bouncing happily with her in his crib. Perhaps he was excited because with all the dolls scattered around the house belonging to his three older sisters (I have two Cabbage Patch Kids up on the shelf in our bedroom myself), he thought, "Finally! A doll just for me!"

After loving on his new toy, I asked him if I could see the doll. I read the pamphlet that came with and turned her on by pressing her belly. I have to admit, the breathing sounds freaked me out a little bit at first. Of course, after a while you get used to it, but I was afraid it would startle my son. With the breathing and heartbeat sounds on, I handed her back to Kai. He didn't seem startled one bit. He went back to hugging her.

I believe the sounds of the doll, though not very loud at all, probably keep him from being startled.

The doll emits a steady heartbeat and breathing sounds. They are very realistic. White noise has been deemed useful to drown out noise interruptions for babies, although the American Pediatric Academy has warned that some white noise machines exceed healthy noise limits, per Heathline. I know that playing classical music for my daughters when they were babies drowned out the sound of us walking around the house. Living in an apartment building, we've had noisy neighbors. More than a few times I was worried about someone slamming their door or a car alarm going off and waking him from his slumber. I believe the sounds of the doll, though not very loud at all, probably keep him from being startled by these noises.

There is also support for the use of loveys among researchers. Johns Hopkins Medicine has recommended parents introduce a "transitional object" — a lovey, in parental talk — to aid with sleep once your baby is able to roll and sit to avoid the risk of suffocation. (The baby's sleep environment is otherwise supposed to be free of bedding or other objects, per the American Pediatric Academy's Safe Sleep Guidelines.)

The first few nights, I thought perhaps the sounds of the doll would keep Kai awake, or be weird for him, but he fell asleep as usual. I think it's possible that the sounds give Kai the assurance he needed to stay asleep. Studies have shown that co-sleeping — sleeping in the same room with the parent — is better for an infant. The sounds of the Lulla Doll imitate the sound of a sleeping parent. And since we are often in the other room watching television or talking during the early part of the night, I suspect Kai feels secure with his doll because he doesn't feel alone.

Kai has developed an attachment to "El," as my husband started calling her because he believes the doll looks like the Stranger Things character — hilarious! With her short hair, the Lulla Doll does somewhat resemble her. When it's Kai's bedtime, I ask him if he wants El to go to sleep, and he nods, smiling. He puts his little arms around her, hugs her, and drifts off to sleep. It has fast become his lovey.

If I have one complaint about this precious doll, it is that the battery runs out pretty quickly — this is perhaps understandable, considering she's on all night and during nap times. It's also partially my husband's fault, because when he gets Kai up from his naps or in the morning, he always forgets to turn the doll off!

We are very careful with Kai's Lulla Doll, since he has such affection for her.

The batteries are easy to replace, with a little screwdriver, and you can easily take the sound box out of the doll if she needs a wash in the washing machine. We keep AAA batteries around just in case. Perhaps when he's older, he'll want to continue to sleep with or play with the doll and we can take the sound box out of her. All three of my daughters still have loveys or stuffed animals that they loved and slumbered with as babies.

We are very careful with Kai's Lulla Doll, since he has such affection for her. We take care of her the way we took care of his sister's loveys, because at this point, we honestly don't know if he'd notice or miss her presence if something happened to her. We don't take her out of the house with him, though we would if we were to go on a long trip or family vacation. We keep her in his crib most of the time, though sometimes when he wakes up from his afternoon nap, he carries her with him to the living room. And yes, of course he treats her rough, as toddlers tend to do with their toys. He drops her on the floor. He's spilled milk on her. He's even thrown her, but she's perfectly fine because of the great construction. Sometimes I even hug and kiss El to make Kai smile. I've sung to her and rocked her to "sleep" to please him also. Nothing like making my toddler smile!

More Like This
Here's When Your Baby Might Start Sleeping Through The Night For Real
Baby Not Napping At Day Care? These Reasons May Be Why
These 4 Sleeping Positions Will Keep You Comfortable After A C-Section
From Captions To Gifts, These Are All The Kindergarten Graduation Ideas You Need