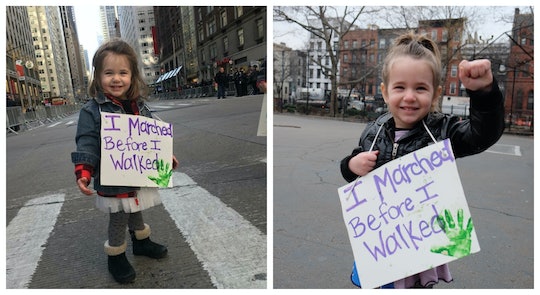 Last January, a picture of my daughter, just shy of 2, went viral after she marched down Fifth Avenue in Manhattan with a sign slung around her neck that read, “I marched before I walked.” I reflected then on what activism means for young people. As we approach this weekend’s protest, I’m reflecting on why we — me and my now-almost-3-year-old toddler — are attending the Women’s March once again.

Motherhood is at the same time exhilarating and exhausting. Being a mom in an in which the objectification of women’s bodies is center stage presents a new level of struggle. Like 5 million of you, I jumped at the opportunity to stand up to the newly elected alleged-sexual-harasser-in-chief and march in the first Women’s March on January 21, 2017. Since that time, like many families, we have taken part in countless activism events, from protesting the Muslim Ban, to standing for Trans and LGBTQ rights, to most recently opposing the nomination of Brett Kavanaugh to the Supreme Court. It hasn’t been logistically the easiest, but each time I have protested, including the time my daughter went viral for her Women’s March sign, my three toddlers (4 and under) have marched right beside me.

Activism and motherhood are not mutually exclusive. This reality has been one of the most invigorating epiphanies for my relatively new ventures into both parenting and activism. As famous activist Audre Lorde tells us, “there is no such thing as a single-issue struggle because we do not live single-issue lives.” As such, I am both a mother and an activist, and everyday I’m learning more what that means.

It is crucial they learn that activism is not a single event, and that they, young as they might be, have a role in it.

The Women’s March is a beautiful, intersectional at best, mass of people rising to say we are here, we are powerful, and we are watching. On a basic level, we’re still marching because this administration continues to wreak havoc on women and we still live in a patriarchal, racist, homophobic and anti-Semitic society. As a parent, I’m still marching with my kids because it is crucial they learn that activism is not a single event, and that they, young as they might be, have a role in it.

The long arch of protests, rallies, voter registration events and the like tell a clear story to my children. Activism isn’t something we do once and check off. It’s part of who we are as a family. It’s how we spend many Saturdays, defines the books we read, how we spend our money, and how we talk about the world and our privileged place of white skin in it.

Further, I believe the next generation has the power to move us closer to a more equitable and loving society, and that works begins in the womb. Understandably, if that idealistic notion isn’t enough reason for you to risk a toddler meltdown on the National Mall, consider findings from a new research report citing early civic activity links to better academic and financial outcomes regardless of early school performance and parental education levels.

In preparation for Saturday, I’ve shown Skyler pictures of last year’s march and let her know we’ll be getting on a bus bright and early to go to D.C. to march for equality, justice, and love again this year.

During our conversation, I pulled out the sign, at which point she wanted to see if it still fit. Oh yes, Skyler. It still fits. Activism, and your role in it, will fit for a long time.