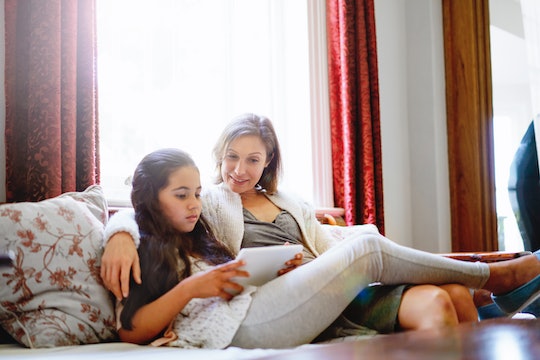 Before COVID, anxiety lay on my chest like an elephant as I worried who my daughter was friends with, whether anyone was being a mean girl, whether her friends’ moms were safe drivers, whether sick kids were showing up in school, whether boys were being too physical during gym, and on. Sheltering in place has moved all these worries offstage.

Instead, there is an invisible, silent enemy beyond the walls of our home, and the hardships are about the absence of those relationships, a coming adolescence put on pause.

While in quarantine, I’m missing my aging parents (who are also in lockdown), while my 11-year-old daughter is forgoing rites of passage like her fifth grade graduation ceremony, spring concert, and April birthday party.

Though a million memes and PSAs have joked about how frustrating it is for parents to have kids underfoot all the time, I have discovered a silver lining: a reprieve from my hypervigilance as parent of a blossoming tween.

Now, as we shelter in place, our family is making the best of our new normal. As a writing professor at New York University, I’m doing Zoom classes with my students, and my husband is situated in the dining room on daylong conference calls as my daughter does remote learning. As her changing friends group transforms from real time to FaceTime, I know exactly what she is doing (mainly Roblox) and whom she is doing it with. To keep her safe online, I’ve locked down her privacy and I’ve installed the app Bark, which monitors texts, email, apps, and social media so I can be notified of potential cyberbullying, violent or sexually inappropriate chat the minute it happens. Plus while ensconced in our home, she isn’t meeting anyone new, and nobody is offering her drugs or the chance to vape (nobody did before, but now they really can’t).

If there were a perfect age to be home during a pandemic, from this mom’s point of view, it would be during the tweenage years. For now at least my daughter isn’t too old to favor her friends over her parents (though I know that day is coming). During the week, in between classes, we bake together and she explores science for free via NASA. On weekends, we play fun family games like Kids Against Maturity, Never Have I Ever, Dance Charades, and Spontaneous. I bought her a mini trampoline for our balcony and we do Zoom workouts. We did a virtual scavenger hunt for her birthday and she is building a “Life in the Time of Corona” time capsule. In between school and FaceTime, she tries on makeup using my makeup mirror and plays tug of war with our pre-pandemic puppy whom we had the prescience to bring home in October (like us, she desperately needs a trip to the salon).

I will let go once again when I need to return her to the world.

During moments of boredom and when she is most upset at being stuck inside, I remind my daughter to look at the big picture: like generations before us who survived the Spanish Flu, the world wars, and 9/11, our mantra is “this too shall pass.” In the meantime, I want her to get through this time unscathed, so I parse what I say, and keep her away from images of sick people on ventilators and makeshift morgues.

While bereft about what’s happening globally, it gives me solace that even if I can’t protect anyone else, I can still protect her.

Our sheltering in place is working. The curve appears to be flattening, although our state’s governor says there is a caveat: until we get a vaccine, he believes students will need to wear masks if they go back to school this year. Those images conjure up a horror scene out of a dystopian novel that I can’t let my mind rest on too long.

Like all parents, I can't control what is happening around me and I’m struggling to adjust. I know that we will be going back and it is unrealistic to think that I can surround my daughter with a force field of love that will permanently keep her safe. I will let go once again when I need to return her to the world. I think I understand better than before what is truly worth worrying about and what isn’t all that important. But just for now, before life reforms into the next new normal, I’ve found a safe place at home surrounded by my family where despite being mom 24/7 I can relax.

While the world pays rapt attention to its breathing, I will exhale.

Even if it’s just at home and just for the moment.