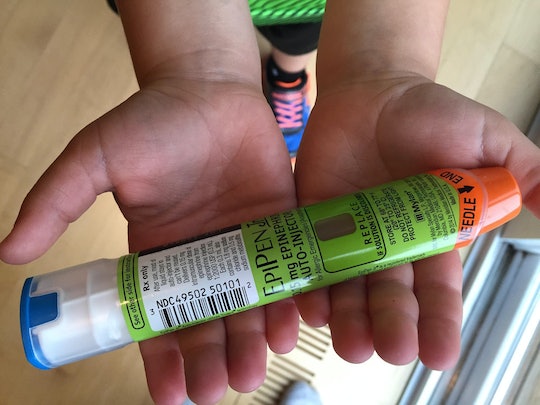 Mylan Will Sell A Generic EpiPen For Half The Cost, & Here’s What That Means

On Monday, pharmaceutical company Mylan announced it will sell a generic EpiPen for half the cost of its brand name original. The medicine delivers epinephrine via injection, used by an individual with severe, life-threatening allergies that when triggered, could result in anaphylactic shock. Mylan recently announced it was raising the price of its brand name EpiPen to $600 per two injection pens, a move that has received harsh criticism from both the health community and the government. Monday's announcement is especially confounding, given that no other pharmaceutical company has been able to obtain a patent to develop a generic version of the drug and its delivery system.

Mylan will now offer a two-pack of generic EpiPens for just $300, to be released in the next several weeks. Last Thursday, the $23.7 billion pharmaceutical giant announced a two-pronged discount program for the purchase of EpiPens: First, Mylan would offer EpiPen coupons that would cover up to $300 towards the cost of the two-pack. Second, the company announced it would double the eligible income for families who needed assistance to purchase the drug, without having to pay out of pocket for it. Still, the moves seemed perfunctory at best, given that the price of EpiPen has risen over 400 percent in the past nine years since Mylan acquired the drug. Mylan did not immediately return Romper's request for comment.

Mylan CEO Heather Bresch has been under fire since the company first announced its $600 price hike for the life-saving autoinjector pens. On Thursday, Bresch defended the EpiPen price hike to CNBC's Squawk Box, highlighting a number of issues that have driven up the cost to consumers: high premium health insurance plans, pharmaceutical "middlemen" between the drug companies and consumers, and how Mylan is trying to make sure that every school in America has an emergency stock of EpiPens on site. Bresch also said that there were additional costs to the EpiPen that included "manufacturing the product, distributing the product, enhancing the product, investing."

It's at this point I have to wonder — has Bresch even paid attention to the news in the past year? Does the whole "Martin Shkreli Turing Pharmaceuticals" price gouging scandal not ring a bell?

More frustrating still with Monday's news from Mylan is that its generic EpiPen will be identical to its brand name counterpart — which, begs the question: Why does the EpiPen cost $600 in the first place for consumers, when the exact same product will be sold for half the list price? The only difference between the two products is that one pack will have the EpiPen labeling and branding, and the other won't.

In a statement from the company, Bresch did little to answer that question, only further reiterating her claims as to why EpiPen must cost as much as it does — but that patients still need a lower-cost alternative:

Our decision to launch a generic alternative to EpiPen® is an extraordinary commercial response, which required the cooperation of our partner. However, because of the complexity and opaqueness of today's branded pharmaceutical supply chain and the increased shifting of costs to patients as a result of high deductible health plans, we determined that bypassing the brand system in this case and offering an additional alternative was the best option.

Perhaps the beleaguered CEO saw the writing on the wall, especially when Bresch sold over 100,000 shares of Mylan stock just two weeks before the EpiPen price hike was announced.