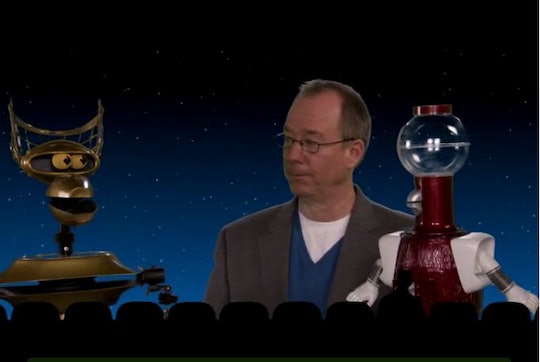 Dust off your old popcorn maker, because Mystery Science Theater 3000 is (probably) back! On Tuesday, series creator Joel Hodgson launched a Kickstarter campaign to resurrect the beloved cult TV show, and just one day later, it’s already brought in over $1 million, which is half of its minimum goal. Hodgson explains that for $2 million, he’ll be able to finance three new episodes of the show, but the ultimate goal is $5.5 million, enough to fund a full twelve episode season.

For the uninitiated, Mystery Science Theater 3000 (or MST3K to the cool kids) was a very weird show that ran from 1988 to 1999, first on a local Minneapolis station, later on Comedy Central, and then briefly on The Sci-Fi Channel (now known as SyFy, which airs things like Sharknado and the like; good call canceling MST3K, SyFy). The premise was that two evil scientists were trying to devise a way to weaponize bad movies. They kidnapped a janitor named Joel and sent him into space to use him as a guinea pig. Imprisoned on the Satellite of Love, Joel is forced to watch bad movies until he dies. To keep himself from going crazy, he builds two robot companions named Crow and Tom Servo, as one does. The robots watch the movies with him, and the three of them provide commentary (aka riff on the movies). Most of the actual screen time was devoted to the movies, with silhouettes of Joel, Crow, and Tom Servo at the bottom of the screen, talking over the movie.

Sound weird? That's cause it was! But it was also really funny. Think about it, have you ever had a “bad movie night” with friends, where you watch a terrible movie ironically and make fun of it together? If you haven’t, I highly recommend it. And 2015 is so ready for MST3K. You’ve heard of RiffTrax Live, where comedians riff on movies in the theater? It’s those same guys! There is definitely still a market for MST3K. Personally, I’d love to see Joel and the gang tackle Rubber, the movie about a killer tire (not joking), Pixels, or Frozen (hated it, come at me). And I’m not the only one looking forward to a new season.

According to the Kickstarter campaign page, fans who donate are offered various rewards (depending on the amount that they donate), ranging from exclusive insider production updates and t-shirts all the way up to a chance to appear on the show or keep one of the actual robot puppets used during filming. If you’ve got between $10 and $10,000 you can spare, get over there and help Joel out. After all, the poor guy is stuck on a satellite.