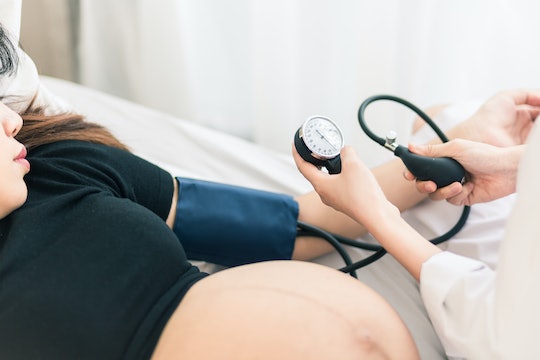 Googling Your Postpartum Symptoms May Lead To Overlooking A Deadly Complication

If you've ever attempted to Google a likely-harmless symptom only to end up paranoid that you might actually have a rare form of cancer, then you're probably already well aware that the internet is no substitute for actual medical advice from a qualified professional. But while internet "research" often leads people to assume the worst, a recent analysis by ProPublica found that searching for information on preeclampsia — a potentially deadly pregnancy complication — might mistakenly lead women to assume it's less dangerous than it actually is. It turns out that myths about preeclampsia can even be found on major health websites, and it means that women may not be getting the crucial information they need. And given that studies have already found that most preeclampsia deaths are actually preventable? Ensuring that women have an accurate understanding of the disorder seems incredibly important.

While no woman wants to spend her pregnancy worrying about all of the things that could go wrong, preeclampsia is something that should likely at least be on every mom-to-be's radar. That's because the condition can be fatal: according to the Centers for Disease Control, hypertensive disorders of pregnancy accounted for nearly 7 percent of all pregnancy-related deaths in the United States from 2011–2014. And the risk is particularly high for non-Hispanic black women, for whom preeclampsia and eclampsia make up the third-leading cause of maternal death.

Although the prospect of dying from pregnancy complications is certainly scary, the condition itself is largely treatable. The problem, though, seems to lie in the fact that the overwhelming number of preeclampsia deaths actually occur after the baby is born: according to the Preeclampsia Foundation, a whopping 97 percent of maternal deaths related to preeclampsia happen in the postpartum period.

The problem, of course, is that without that very important additional piece of information, it becomes incredibly easy for women to downplay any symptoms they may be experiencing. Most women expect to feel pretty brutal in the postpartum period (they have just had a baby after all, and sleep deprivation just makes everything feel so much worse). But some symptoms should definitely not be ignored: signs of postpartum preeclampsia can include headaches, abdominal pain, and vision changes (like blurriness or sensitivity to light), according to the Mayo Clinic's page, and the Preeclampsia Foundation's "Still At Risk" campaign also encourages new moms to also tell their doctors if they experience nausea or vomiting, swelling in the hands or face, or shortness of breath.

Given the life-threatening nature of the disorder though? If you can't reach your doctor, the Preeclampsia Foundation recommends going to the emergency department right away, and emphasizing that you just had a baby.

Navigating postpartum complications is never easy — it be hard to tell what's "normal" and what isn't, and no new mom ever wants to have to drag herself back to the hospital if she's just going to be told that she's actually fine. But when it comes to preeclampsia, it seems absolutely worth it to err on the side of caution every single time. And while it's probably good advice in general, this also seems like a really good example of when you should give skip out entirely on consulting Dr. Google.