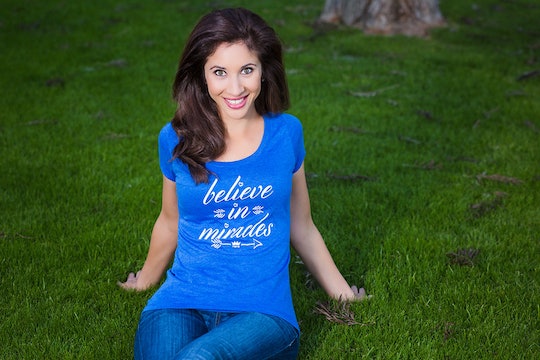 Photo Courtesy of Mama B. Designs

This Mom's Insta-worthy Momwear Gives Back To The Most Vulnerable

When Nadine Bubeck’s son Nicholas emerged from the NICU happy and healthy, she was emotional and overwhelmed, but, most of all, grateful. That’s not to say that the seven days Bubeck endured in the NICU hadn’t been life-changing — they were. After all, Nicholas had been born six weeks early and weighed 4 pounds, 11 ounces when he arrived. But she couldn’t shake the feeling that there were so many parents whose stories had a different outcome.

“I was just so overcome with the magnitude of motherhood and my life changed,” she says. “Everything inside of me changed.” Feeling a pull to spend more time with Nicholas and follow her creative passions, Bubeck soon traded her role as a television news reporter for working from home with her son at her side. She even published her unedited pregnancy journal, Expecting Perfect: My Bumpy Journey To Motherhood, as a way to help other women who might be navigating similar pregnancy issues.

“Every woman expects a perfect pregnancy, but perfection is really a facade,” Bubeck says, pointing at her diagnosis of placenta previa at 20 weeks pregnant, required bed rest, and baby shower in the hospital. “There was no Facebook-esque maternity shoot. I wanted women to understand they weren’t alone and to embrace the experience."

When Nicholas was 18 months, Bubeck’s second son Zachary was born and so was Mama B. Designs, an endeavor Bubeck says resulted from her entrepreneurial spirit and wish to give back.

“I was reignited with an inner entrepreneurial flame to start something on my own, and creating the apparel line was a perfect fit,” she says. “I put all the puzzle pieces together and dove right into making Mama B. Designs a reality.”

Bubeck says her initial desire to create something for boy moms led her to create T-shirts like Mama Knows Best and Boy Mamas Have More Fun, an instant hit for mothers who were seeking options to match their children. But then she was struck by something bigger — the inspiration to design “fashion that gives back.” With that nudge, Bubeck created her signature Miracle Line of shirts, donating 50 percent of each one sold from the collection to the March of Dimes, an organization dedicated to improving the health of babies by preventing birth defects, premature birth, and infant mortality. With premature birth ranking as the number one cause of death in babies, the March of Dimes uses its funds for essential prematurity research and to provide resources to families.

“I wanted something to fulfill my soul,” Bubeck says of the partnership. “This is where my heart is.”

Bubeck says the Miracle Line is appealing to people beyond those who might be affected by premature birth. The inspirational t-shirts are Bubeck’s nod to the way in which she leads her life — through passion and honoring her spirit.

And she hopes that for other women as well, offering a few tips that help point her in the right direction on a daily basis. The first thing on her agenda? Have a plan. Bubeck says this includes asking yourself, “What am I trying to accomplish?” and setting goals to go about doing so. She also believes in writing things down in order to help manifest her goals. “Somehow the universe works in your favor when you write things down."

She also believes in staying connected with old acquaintances — “don’t burn your bridges” — welcoming publicity if you are looking for exposure, and learning to love public speaking and being in front of the camera.

“Whether you’re speaking to someone one-on-one or presenting to an audience, people skills and public speaking will strengthen your brand,” Bubeck says. “If this skill intimidates you, then practice — it can be as simple as reading an entertaining story to your children.”

Other favorites include having tough skin and taking risks. “Sometimes we cannot stop negative and worrisome feelings from entering our bodies, but we do have the power to stop them from holding us back."

Today, Nicholas is 4 and Zachary is 2. Along with Bubeck and her husband, the two brothers welcomed their brother Alexander in August. The family visits the NICU annually on Nicholas’ birthday, delivering baskets to other families who find themselves where the family of five did not too long ago. “I’m so grateful that while born early, Nicholas was born fine,” Bubeck says. “But there are so many stories that just bring tears to your eyes.”

Like her goal that Mama B. Designs plays “just a small role” in the work that March of Dimes does daily, it’s also her hope that her boys find a passion for giving back.

Check out Mama B. Designs today: Readers will enjoy 20 percent off sitewide with the code BUSTLE20 at checkout.