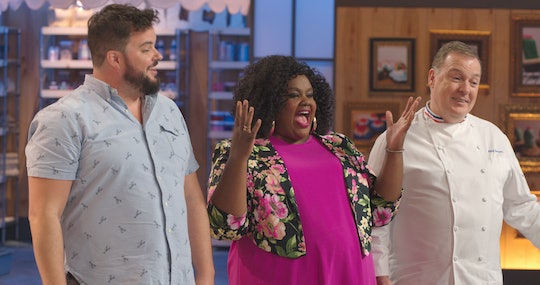 Why Parents Love 'Nailed It' So Damn Much

Since becoming parents, my husband and I have had to reconfigure our expectations around date nights. What once consisted of binging on vodka-sodas, going out to dinner, and stumbling home around 3:00 a.m. has evolved into eating ice cream straight from the pint, binge-watching shows on Netflix, and lights-out by 9:30 p.m. During one of our most recent date nights we stumbled across the show Nailed It. At first glance, this baking competition, hosted by comedian Nicole Byer and pastry chef extraordinaire Jacques Torres, seems like your average reality contest show, but a couple of episodes deep I realized that Nailed It is quite literally a reflection of our age of parenting.

Where Iron Chef took competitive cooking to extreme levels on a set that looked like Judgement Day on hell's porch, and The Great British Bakeoff revels in the devastatingly polite competence of hobbyist bakers, Nailed It recruits people who pour salt into their cake batter instead of sugar; people who bake cookie dough in a contiguous sheet and then attempt to cut out the shapes; bakers who substitute sour candy rope for fondant when they run out of time; and whose figures are forever toppling, molten, princesses screaming for help from behind unsleeping eyes. The bakers are forever making do, saying "EH, GOOD ENOUGH I'M OUT OF TIME."

What parent doesn't relate to that level of cheer in the face of incompetence and/or a steep learning curve?

When I was 8, I was on a softball team. I was not even remotely athletic and frankly I could care less. I could usually be found sitting on the bench but in the rare case I was out on the field during a game I was in the outfield. At the end of the season, the team who won the championships got a trophy — the rest of the teams did not. This doesn’t really happen anymore. Our age of parents celebrates not only our kids' victories, but trumpets the fact that they bothered showing up. We teach them that “it doesn’t matter whether you win or lose, it’s how you play the game!” and we millennials are ridiculed for doing so.

My kid has not taken a step in his two years of life thus far without me standing behind him cheering him on.

I see a lot of this reflected in my own parenting. I celebrate everything my son does, quite possibly to a fault. My kid has not taken a step in his two years of life thus far without me standing behind him cheering him on. Previous generations often criticize us for spoiling our children or raising them to have a sense of entitlement, but I feel that taking the focus off winning or losing allows children to take risks, because the process really is more important than the outcome.

Nailed It is essentially the Netflix version of a softball participation trophy. Each episode features three eager amateur bakers attempting to recreate Pinterest-worthy desserts with the hope of willing the grand prize of $10,000. The way Nailed It sets itself apart from other baking competitions — or any other reality show competition for that matter — is that there is no consequence for failing. There are no eliminations, there is no loser.

In the beginning of each round the bakers are shown an impossibly perfect cake that they have to recreate in just two hours. The last episode I watched, three women were challenged to recreate an emoji cake. After frantically trying to accomplish in two hours what probably took a professional baker four hours to complete, the participants presented their cakes to the judges. Each of the women revealed their lopsided grimace-faced cakes while gleefully yelling “NAILED IT!” — triumphant self-owns that were followed by Byer laughing hysterically.

'You know... you put a cake together, so for that, congratulations,' Torres tells one of the contestants.

Despite how terrible the cakes always look, the praise from the judges mirrors things a mother might say to her child. “You know... you put a cake together, so for that, congratulations,” Torres tells one of the contestants. Guest judge Charity George tells another contestant, “You are a rock star — you kept going, you never gave up.”

Coming into the second round, Byer usually says something like, “Forget about that last round because everyone starts from scratch in this next round!” Why can’t everything in life get a “start from scratch” do-over option?

After watching every episode of this show multiple times, I have a real appreciation for the gentle approach it takes toward its contestants. While my husband gets annoyed that nobody loses, I see this as the show's most endearing component. Many of the show's contestants are mothers who introduce themselves by saying that they love to bake for their children and friends. I can’t really find a greater metaphor for motherhood than being given a nearly impossible task to complete in a ridiculously small amount of time and laughing in the face of your failure, before getting right back at it. Motherhood really is about showing up and giving it a college try.

So, to all the parents out there who get criticized for celebrating their children’s attempts rather than focusing on their failures, I say you’re nailing it.

More Like This
9 Reasons Why Some Women Can't Breastfeed
The Morning Rush Is Parenting At Its Most Essential
Dr. Jill Biden Just Delivered Some Frank, But Powerful, Advice On Motherhood
Sex And Mom Guilt: When I Date Someone New, Am I Cheating On My Kids?