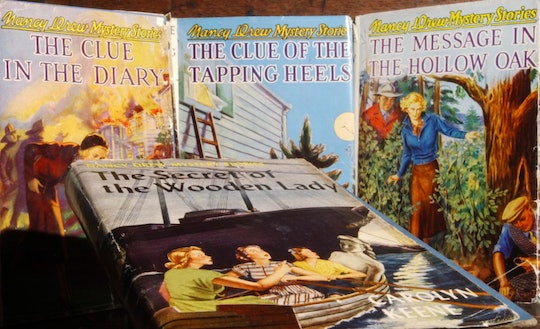 Since 1930, readers have considered Nancy Drew a bad*ss, mystery-solving, feminist icon. Her detective stories have remained popular for generations, and for good reason. Which is why a bit of recent news is a more than a little troubling for literary buffs. Because it turns out Nancy Drew is getting killed for her 90th birthday — and fans aren't happy about it at all.

Yep, Nancy Drew is turning 90. And apparently in celebration of this milestone, the legendary detective is getting killed off in a new comic series from Dynamite Entertainment. (Happy birthday?) But wait, it gets even better. Not only is the beloved character getting axed, the Hardy Boys are the ones who will be solving the mystery of her murder. A new monthly series titled Nancy Drew and The Hardy Boys: The Death of Nancy Drew — written by Anthony Del Col and illustrated by Joe Eisma — opens with the brothers standing next to Drew's grave, according to Inverse.

“Over the years, there have been a lot of difficult mysteries to solve in the lives of Nancy Drew as well as the Hardy Boys,” Del Col told Comics Beat. “But I wanted to top them all, and so put together the ultimate case — solving Nancy’s death! Joe Eisma and I have had a blast really coming up with some twists and turns that all fans — new and old — of Nancy, Frank, and Joe will enjoy.”

Hmmm. I'm not so sure about that.

Although Nancy Drew and the Hardy Boys have had many crossovers in the past, this one has definitely rubbed fans the wrong way. In fact, people were seriously pissed over on Twitter. One person commented, "The Nancy Drew books were powerful because a smart, brave, independent young woman solved crimes by doing all the things we got told weren’t for girls. Killing her off so two male characters can have as adventure is the ultimate betrayal of that legacy." Ouch.

Still, some entertaining conspiracy theories have popped up — including one involving the recently-departed Mr. Peanut. Another Twitter user pointed out, "Theres a lot of inherent misogyny in this idea but i wanna be clear mr peanut and nancy drew faked their deaths and eloped. she married that f*cking peanut. worlds best 90 y/o detective and 104 average peanut die at once? nah."

Others are holding out hope that Nancy Drew ends up alive and well in the end. "One person wrote, "The twist damn well better be that a) she's alive b) she hired them to investigate her murder so that c) she could continue a bigger ongoing investigation while her target thought her dead only to reveal herself to her friends at the finale. Because that's how Nancy Drew would do."

Hopefully, there really is some dramatic plot twist and Nancy Drew somehow pulls through her fake murder. Because killing off the feminist icon on her 90th birthday and then having two men take over her work isn't only the worst birthday present ever — it's just plain insulting.