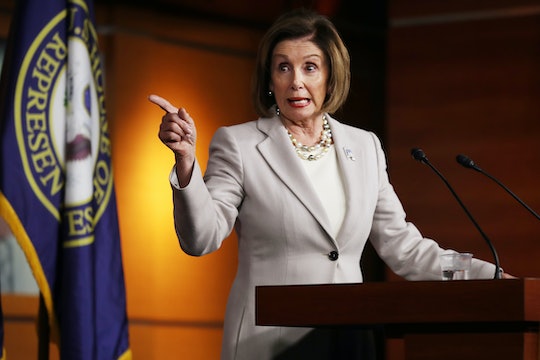 Since she became Speaker of the House, Nancy Pelosi has had a handful of mic-drop moments. Like that time when President Donald Trump called for the rejection of "the politics of revenge, resistance, and retribution, and embrace the boundless potential cooperation, compromise, and the common good." That's when Pelosi whipped out her iconic clap — who know, the one heard around the world. Most recently, though, Pelosi responded to Trump's "meltdown" tweet with superb shade. And we should all just bow down to her

So here's what happened. On Wednesday, Oct. 16, lawmakers and the White House administration met to talk about Turkey and Syria. The House of Representatives had strongly backed a resolution condemning Trump's decision to withdraw U.S. troops from Syria, USA Today reported. Democratic lawmakers said Pelosi left the meeting after Trump called her a "third-rate politician." To that, the Speaker of the House reportedly replied, "I wish you were a politician, Mr. President. Then you would know the art of the possible," according to USA Today.

After it was all said and done, Trump tweeted out a photo of the meeting held at the White House. It featured Pelosi standing up and pointing at the president, who claimed it was Pelosi who had an "unhinged meltdown." Naturally, Pelosi came across Trump's jab. And she decided to make it her cover photo both on Twitter and Facebook, according to The Hill. It was Pelosi's deputy chief of staff, Drew Hammill, who drew attention to her photo change. "Thanks for the new cover photo @realDonaldTrump!" he tweeted.

Let's just say people on Twitter loved the fact that Pelosi turned what was intended by Trump a burn into an empowered moment. Democratic Presidential candidate Amy Klobuchar tweeted, "Can a woman beat Donald Trump? Yes. @SpeakerPelosi does it every day."

Another Twitter user commented, "Love it! Lol, she is a boss in control in this picture. His side of the photo looks humiliated, as they should. #PresidentPelosi."

Yet another Twitter user declared, "OMG she gets trolling champion of the year in my book."

You know, this reminds me of when Sen. Elizabeth Warren was silenced — thanks to a little-known rule — in the middle of a speech criticizing attorney general nominee Jeff Sessions. Senate Majority Leader Mitch McConnell's later defended the move, explaining, "Sen. Warren was giving a lengthy speech,” he said, according to the Washington Post. “She had appeared to violate the rule. She was warned. She was given an explanation. Nevertheless, she persisted.” And thus, the feminist battlecry "nevertheless, she persisted" was born.

I will never grow tired of witnessing badass, capable females taking charge and rising above. So let's all bow down to Nancy Pelosi for how she handled Trump's "meltdown" comment. Because out of the two, I think we know who is infinitely more prone to melting down.