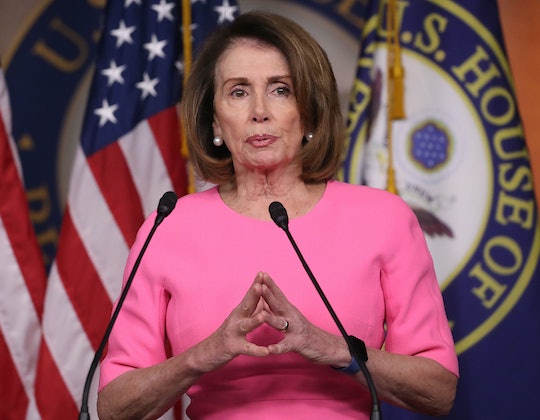 Still reeling from their loss in the 2016 presidential race, Democrats are searching for ways to strengthen the party, even if that means abandoning previously held ideology. House Minority Leader Nancy Pelosi even told The Washington Post this week that, by her estimations, abortion access isn't a fundamental issue for Democrats. But Pelosi's abortion comments miss the point entirely; In insisting that the right to choose is negotiable for Democratic leaders, Pelosi fails to accurately promote the concerns of not only her party, but of the nation as a whole.

Pelosi insisted: "In our caucus, one thing unifies us: our values about working families." Whereas "some people are more or less enthusiastic about this issue or that issue or that issue," she shared, "they’ll go along with the program, but their enthusiasm is about America’s working families," and, by her estimation, not about the right to choose.

But Pelosi didn't stop there. She made things personal, and credited abortion politics for former presidential nominee Hillary Clinton's loss. "That’s why Donald Trump is president of the United States — the evangelicals and the Catholics, anti-marriage equality, anti-choice," Pelosi urged. "That’s how he got to be president."

If that's truly so, then why is "public support for legal abortion is as high as it has been in two decades of polling," according to 2016 results from Pew Research Center? If anti-choice advocates determined who won the presidency, then why did 57 percent of those polled say abortion should be legal in all or most cases, next to the 39 percent who answered that it should be illegal in all or most cases? Even when analyzing conditional stances on abortion, the highest percentage of people — not just Democrats — believe that, in most cases, abortion should be legal.

Apart from Pelosi's ill-informed political take on the matter — promoting a willingness to accept anti-choice Democratic candidates — the stance also devalues women's rights and their personal body autonomy. "There is little more fundamental to women's economic stability than the ability to plan, afford, and, if necessary, end pregnancies," Cosmopolitan columnist Jill Filipovic wrote, emphasizing that "reproductive choice is as much a health issue as an economic one." By ignoring the impact that restricting the right to choose would have, and saying "it’s kind of fading as an issue," Pelosi fails to support the needs of all women, across the spectrum, both economically and health-wise.

Abortion access is still not a given in the United Stated; Conservative lawmakers are working on legislation to restrict it constantly. That the Democratic party (Sen. Bernie Sanders included, who supported an anti-choice Democratic candidate for mayor in Nebraska) would not support women of all parties in securing safe and accessible abortion services is not only unequal, but it goes against the consensus of the general public. If you're looking for an issue to blame for the party's presidential loss, as well as push the party forward, regressing to ambivalence is not the answer.