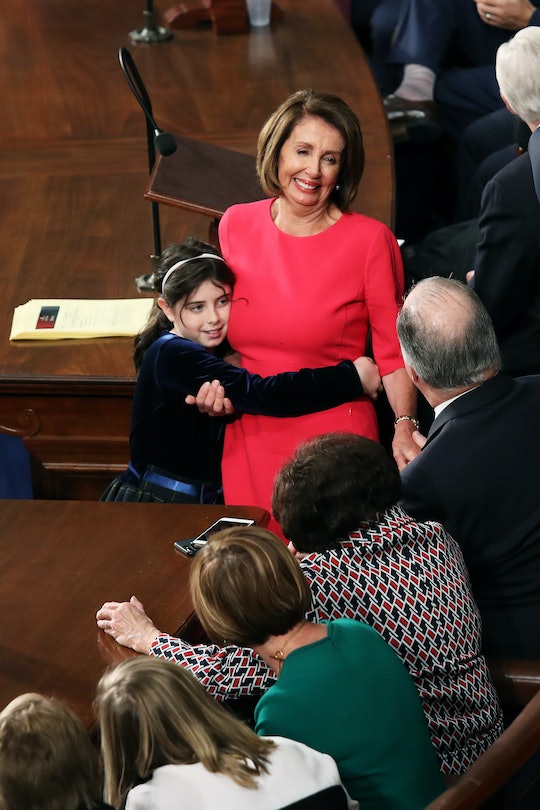 Nancy Pelosi Was Sworn In As House Speaker, But Her Granddaughter Stole The Show

Former House Minority Leader Nancy Pelosi became Speaker of the House on Thursday, Jan. 3, a thrilling moment for many Democrats and women across the United States. But no one was more excited than Nancy Pelosi's granddaughter, who was absolutely ecstatic during the House Speaker vote. Buckle up for a lot of cuteness, folks.

On Thursday, 78-year-old Pelosi became one of the oldest House speakers ever elected, according to Vox. This is a major accomplishment in itself, but it's especially admirable considering Pelosi is the only female in history to hold the prestigious title, according to USA Today. An even more satisfying tidbit? Pelosi, who served in the same role between from 2007-2011, reclaimed her position following the tenures of two Republican men.

Given Pelosi's fight back to the top, it's understandable that she wanted her loved ones and friends to witness Thursday's monumental House vote. One particularly notable family member in the audience was Pelosi's granddaughter, Bella Pelosi Kaufman, according to ABC News.

As Pelosi racked up the votes to secure her spot as House Speaker, the adorable Bella couldn't contain her excitement as she jumped up and down in her seat.

BuzzFeed News' deputy director David Mack was the first one to point out the adorable scene, writing on Twitter: "This little girl is VERY EXCITED that people are voting for Nancy Pelosi."

"The best bit is at the end when she stops clapping for a second and then is like F—K YEAH," he added.

"I guess she's Pelosi's granddaughter? anyway, she is ABSOLUTELY LOSING IT," he then captioned a clip of Bella bouncing up and down as she held Pelosi's hand.

As if the moment couldn't get any more precious, Bella also shouted "PELOSIIIII" towards the end of the vote, according to BuzzFeed News.

Bella was also right by Pelosi's side as she was sworn in. Talk about a sweet moment.

Of course, it's no surprise many people can't get enough of the viral clips.

"What a message for her granddaughter to be part of!" one person tweeted. "See what women can do sweet girl!"

Another person chimed in: "Love that! Lots of us are sharing her excitement today."

One commenter pointed out that Bella wore a pin that said, "Madam Speaker."

"If you look closely you'll see Nancy Pelosi's granddaughter Bella is wearing a pin that says "Madam Speaker," they wrote.

"Nancy Pelosi’s granddaughter is exemplary of how all little girls can feel when we have women in leadership and they have representation for their future," one person stated. "This is amazing."

This isn't the first time Bella has taken part in her grandmother's political career. The little girl was present when Pelosi cast her vote in the November 2016 election, for instance.

"For our future #FamilyVote #VoteTogether," Pelosi's daughter, Christine Pelosi, captioned a photo of the trio, according to Twitter.

Yep, it's obvious Bella is Pelosi's biggest fan. But cuteness aside, it's important to recognize why this viral moment is resonating with people on a deeper level. Not only does it highlight a politically active child, but it also demonstrates the power of female leadership. And I have no doubt in my mind that Bella will remember this special day for the rest of her life.