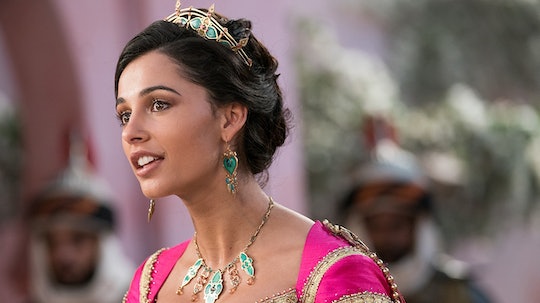 It seems that every woman is more politicized in 2019, and Disney princesses are no exception. In light of the forthcoming live-remake of 1992's animated classic Aladdin, Naomi Scott says her character Princess Jasmine is a "politician," and that she's "more ambitious" this time around. Instead of her plot arch being built around her relationship, it's refreshing to hear Scott's take on her version of Jasmine and that she's more concerned with her father's rule and the well-being of Agrabah's people.

Though the film will follow the same general plot lines as the animated movie, according to CinemaBlend, it seems the new actors took some creative leeway with their roles, adding more depth and dimension to them. As for 26-year-old Scott, she explained to People in a recent interview that the main difference for Jasmine is that she's "fighting for the injustice of her people," instead of just her own right to marry who she pleases.

"My girl's a politician, do you know what I mean? She's not just there to look pretty," Scott told the magazine, adding that she and the team made Jasmine "more ambitious" and that they "broadened her horizons."

It's a timely and welcome evolution for the character, who would undoubtedly be influenced by the modern political climate, and call-to-arms for women and all individuals to be more aggressive, outspoken, informed and action-oriented when it comes to making, and sustaining, change.

Jasmine, for her part, is part of a fictional city's royal family. This means that she has not only access to the ruling powers, but can influence them as well. And it's a fact that Scott did not forget. “I love the fact that the power is then in in her hands, and that she becomes the Sultana,” Scott told Yahoo! Movies. “She's like, ‘Well, I'm a boss lady, so I’ll just change the law!’ And she's actively pushing forward her own narrative. I just love that.”

However, Scott also reassured fans that Jasmine will still fall in love with Aladdin, and that element of the story will remain intact. “She does fall head over heels in love with Aladdin... And he represents this kind of freedom that she longs for, and I think that through meeting him, that’s what also gives her confidence as well to speak out," Scott told People.

In another interview with The Independent, Scott opened up about how she wanted the modern Jasmine to be a feminist, one who shows emotion and depth. “She’s so many different things at so many different points,” she told The Independent. “What I love is that you can be strong and you can cry. You can be strong and feel weak... Yeah, she’s sassy, but what’s more important is that she’s actually fighting for the freedom of choice for her people. That’s feminism, it’s not just a witty comment.”

Mostly though, Scott is enthused about what Jasmine means for broadening representation in film, describing it to The Independent as a "gateway to the Eastern world."

It undoubtedly is. It's crucial for young people to be able to see themselves represented in media and entertainment. In fact, Scholastic reported that it's an important element of their development, aiding in their self-image and esteem. Aladdin will be in theaters tomorrow, Friday, May 24.