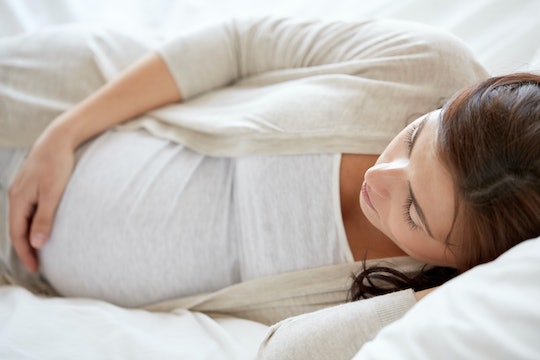 Here's Why You Should Def Be Napping During Your Pregnancy, According To Science

When I found out I was pregnant with twins, I was surprised at how great I felt — at least, for about the first five days. I then got hit with a never-ending wave of exhaustion and nausea, and, oh my, was it ever rough. For many women, pregnancy exhaustion is a struggle that is definitely very real, and getting lots of rest is valuable advice. But a recent study suggests that napping during pregnancy may help prevent low birth weight babies, which means there's really no reason any pregnant woman should ever feel even slightly guilty for catching as much extra shut-eye as she can while she has the chance.

Though it's not entirely surprising to learn that taking naps during pregnancy is a good idea — I mean, when is napping not the best thing ever? —  a team of researchers, led by Lulu Song of the Huazhong University of Science and Technology in Wuhan, China, recently found that napping may actually serve a valuable purpose beyond simply keeping mom happy and energized. Song's team analyzed information from China's 2012-2014 Healthy Baby Cohort study, according to Reuters, which collected data from more than 10,000 women ranging in age between 15 and 50, including their self-reported pregnancy sleep habits. And what they found was that women who often took naps in the afternoon were actually less likely to have low birth weight babies (defined as babies born weighing 5.5 pounds or less) than those who didn't.

The results, published in the April issue of Sleep Medicine, looked at how often pregnant women said they napped, when they did it, and for how long. And their answers suggested that catching some daytime zzz's may have helped lead to a healthier pregnancy: women who napped for about 60-90 minutes were around 29 percent less likely to have a low birth weight baby, while those who napped between five and seven days a week were 22 percent less likely to have a baby with low birth weight.

It's not entirely clear why there was a connection between birth weight and napping habits, and according to Reuters, the study wasn’t a controlled experiment, so more investigation is definitely needed before researchers can confirm that napping reduces the risk. But it does at least suggest that sleep is something that both pregnant women and their doctors should be paying attention to and prioritizing: University of Rochester Medical Center's Dr. Suzanne Karan told Reuters that, while pregnant woman shouldn't necessarily be concerned about undiagnosed sleep disorders, she says the study does at least reinforce the fact that "sleep in general is highly underrated, especially in the United States," and serves as a reminder that "paying attention to sleep is an important part of your overall pregnancy health."

In other words, there's likely no need to schedule in five to seven hour-long naps every week for nine months, but if pregnant women feel like they could use a little extra rest, they should probably take it. At the very least, they'll probably feel a bit more energized. And at best? They may be reducing their risk of having a low birth weight baby, which, to be fair, is something that can have major health implications. According to Stanford Children's Health, low birth weight babies can have lower oxygen levels at birth, can struggle to feed and gain weight, and may be at a higher risk of infection. As a result, low and very-low birth weight babies (those weighing less than (3 pounds, 5 ounces at birth) often need additional care in the neonatal intensive care unit (NICU) before going home.

As scary as that may sound though, it's unlikely that a totally healthy pregnant woman experiencing no complications whatsoever will deliver a low birth weight baby unexpectedly: according to the March of Dimes, the primary causes of low birth weight are premature birth and fetal growth restriction, which can be caused by infection, birth defects, and problems with the placenta. Women with chronic health conditions like high blood pressure or diabetes are also more likely to have low birth weight babies, but in most cases, these complications are identified in advance of delivery.

In other words, if you do have a low birth weight baby, it likely won't just be because you didn't take enough naps. But since napping is a really easy thing to do (especially if you're already tired!), allowing yourself to get some extra sleep couldn't hurt. There are other actually-proven ways to lower your risk though: smoking, drinking alcohol, and abusing drugs while pregnant can lead to low birth weight babies, according to The March of Dimes, as can exposure to air pollution and lead. Other known risk factors to be aware of? Teen mothers and mothers who are over 35 are more likely to have low birth weight babies, as are low-income women, and black women (1 in 7 black babies are born low birth weight, compared to 1 in 14 white babies).

Giving birth to a baby with a healthy birth weight is important, and so any information that can help women and their doctors lower the risk of premature birth or growth restriction is really valuable. But while the Chinese study might not exactly be a pregnancy health game-changer just yet, it's at least pretty great reassurance that there's absolutely nothing wrong with getting some extra sleep when you're pregnant and tired.