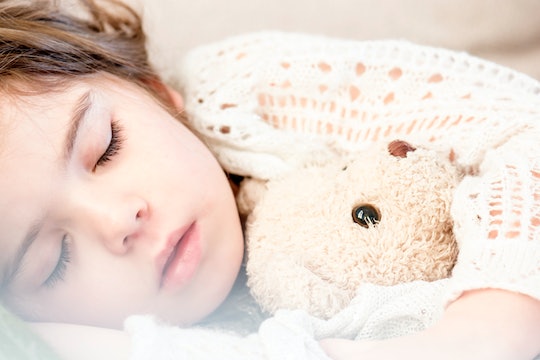 Naps are one of those things that we may not appreciate as kids, but we definitely do as adults: either because we look forward to napping ourselves or because our kids' naps gives us a little break. According to a new study, those midday snoozes might be really beneficial for our kids, too. Researchers have found that naps help preschoolers learn, especially when it comes to language development.

While babies sleep a lot (if not always at night), as they grow up into toddlerhood and master a sleep schedule, their sleep habits eventually change. Even if they're sleeping through the night, toddlers need daytime naps so that they're getting the recommended 10-14 hours of sleep per day. After about the age of 2, most toddlers can dial their naps back to once a day. Daytime naps should ideally be earlier in the day; late afternoon naps can cut into nighttime sleeping hours and disrupt a kids' normal routine.

By the time kids enter preschool, when they're 3 to 5 years old, some parents wonder if naps are still needed. By the age of 5, many kids no longer need a nap and are able to get a full 12 hours of rest at night. But new research from the University of Arizona found that preschoolers get more than just rest from a daytime nap: that little sleep session also boosts their learning power.

Researchers were studying language development in a group of 3-year-olds and wanted to find out if naps would help them retain what they were learning. They taught a series of words to two groups of tots: one group that had a regular nap schedule, and another group who didn't nap regularly. The kids in each group were then randomly assigned to be either nappers or non-nappers for the duration of the experiment.

The researchers made up two words to teach each group: "blicking" and "rooping," which were intended to be verbs. Verbs are generally more difficult for children to master than nouns, and the researchers created two "new" verbs for the study so they could be certain the children had never seen or heard them before.

After being introduced to the new words, children were then shown a video that demonstrated an action meant to represent each of the made-up verbs. When the video was over, some of the kids were allowed to take a nap and the rest were not. The next day when researchers showed them the videos again, the toddlers who had been able to take a nap were able to recall the word associated with the action better than the kiddos who didn't have a nap. This was true whether the kids had been regular nappers before the study or not.

Researchers believe that slow-wave sleep, a phase of sleep the toddlers experienced during their nap, helps with memory. Specifically, consolidation of memories is important for language acquisition — something that a toddler's developing brain is very concerned with.

If your preschooler is totally over naps, though, don't worry. Researchers pointed out that it's generally more important for a kid to be getting enough sleep, whether they take naps or not. If your tot sleeps really well at night and gets 11-12 hours, they may not feel like a nap. Whether they're getting their Zzz's during the day or at night, being well-rested isn't just good for learning, but helps out with immune function, too. And — as is also true in adults — being overtired can lead to grumpiness and tantrums. That being said, good sleep is beneficial for parents and kids alike — so don't feel guilty if you catch a few winks yourself the next time you put your kid down for a nap.