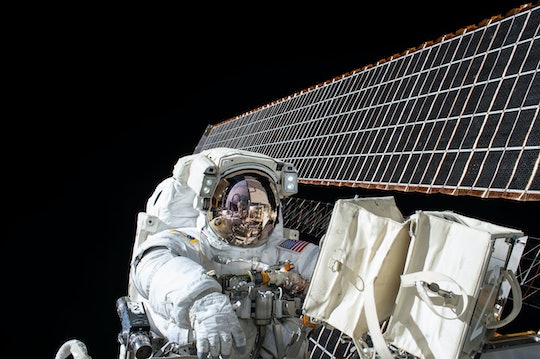 Lack of spacesuit availability — that was the reason given for the cancellation of the historic space walk that would have put two women outside of the International Space Station for the first time ever. And of all the reasons there could have been, falling back on inappropriate sized space suits is pretty much the lamest excuse of all. Understandably, people are upset that such a momentous event could be ruined simply through the lack of forward planning — and they're not keeping quiet. NASA cancelled the first all-female spacewalk and Twitter can't contain itself.

The issue fell with astronaut Anne McClain's spacesuit, according to Engadget. During a practice run she came to the realization that her Hard Upper Torso unit, or the top part of her spacesuit, did not fit correctly. The piece comes in medium, large, and extra-large. McClain trained in both a medium and a large, but found the medium worked best for her. While there were two mediums on board, only one would be ready in time for the walk. Meaning, only one woman who also wore a medium would be able to go.

This meant that her partner, Christina Koch, would perform the space walk without her, taking astronaut Nick Hague in her place, according to a statement released by NASA.

Here's the interesting part. Even though astronauts are measured before they leave Earth, there's no accounting how the lack of gravity will affect their bodies in space. McClain revealed in a tweet that she grew two inches while in space, which is totally amazing.

For the sake of time, NASA opted to send a different astronaut rather than reconfigure a suit to better fit McClain, according to Engadget.

NASA didn't schedule the spacewalk in an effort to make history. It was only after the two female astronauts were scheduled for the space walk that they realized it would be historic, according to NPR.

Sizing of NASA space suits have come under fire before, with the lack of sizing hindering the number of women who could participate in space walks, according to MarketWatch.

So why isn't there a small size? It's all about cost-effectiveness, as astronaut Nancy Currie told NPR back in 2006.

"Do we spend around $15 million to accommodate, relatively speaking, a few more people than we could today? Or, do we take that money and turn it towards the suit development for the next generation?," Currie said.

Following the announcement, people took to Twitter to let NASA know how they really felt.

And really, how hard is it to configure the right sized suit?

Except they do rocket science — for a living!

And what about all these young girls that might hope to walk in space someday? This sends mixed messages, even though it's reportedly a timing issue.

And then there's this:

So, will an all-female spacewalk outside of the International Space Station happen any time soon? NASA thinks it will, as NASA spokeswoman Stephanie Schierholz told The New York Times. The newspaper noted that 12 of NASA's 38 active astronauts are women. The future truly is female.

More Like This
Here’s How To Fight For Abortion Rights
Obamas Issue Powerful Statements After Supreme Court Ends Roe v. Wade
Keep Talking To Your Kids About Abortion — It's More Important Than Ever
Meghan Markle Calls On Men "To Be Vocal" In The Aftermath Of Roe v. Wade Ending