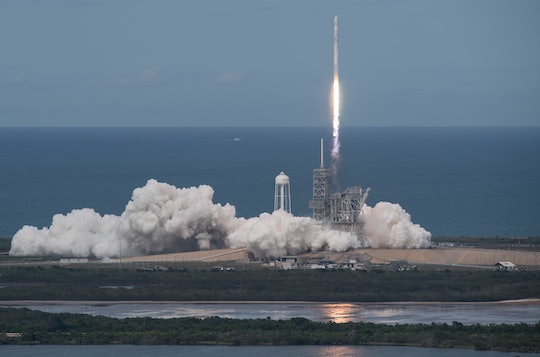 NASA Is Hiring For The Coolest Job Ever, & Yes, It Involves Aliens

As time goes on, available jobs change accordingly. More and more positions are being created in the technology and computer science fields, and less jobs are available in outdated areas such as data entry, word processing, and file clerking. Now, though, an even newer kind of job is being added to the books. Yes, you read that correctly: NASA is literally hiring someone to watch out for aliens, and it pays really well.

Starting at a salary of $124,000, the Planetary Protection Officer will be "responsible for the leadership of NASA's planetary protection capability, maintenance of planetary protection policies, and oversight of their implementation by NASAs space flight missions," per the actual job description. And if that all sounds super complicated, don't worry, it is. Basically, though, the main mission for the Planetary Protection Officer will be to stop "organic-constituent and biological contamination in human and robotic space exploration," from working its way from outer-space back to planet Earth.

In short, though, the Planetary Protection Officer will be working to make sure that no slimy green aliens sneak aboard a spaceship to come invade our wonderful planet (or vice versa). Although to be fair, doesn't it kind of feel like they already have?

As The Independent reports,

The three-year position – with a chance to extend it to five years – was created after the US signed the Outer Space Treaty of 1967, vowing to “pursue studies of outer space ... and conduct exploration of them so as to avoid their harmful contamination and also adverse changes in the environment of the Earth resulting from the introduction of extraterrestrial matter”.

So while it technically isn't new, it's still pretty science-fiction-esque. Candidates are required to have a degree in "physical science, engineering, or mathematics," or education with similar job experience.

The Independent also notes that,

The new hire will likely be part of the upcoming Nasa expedition to Europa, a moon of Jupiter. The $2.7bn (just over £2bn) Europa Clipper mission, approved by Congress, plans to map the moon’s surface and analyse whether it could be habitable. The probe could crash land, however, which is a circumstance the planetary protection officer should prepare for.

Obviously, this isn't exactly th job for someone who's just starting to get into science or engineering, although if you have the experience, definitely take the time to apply.

After all, how many people get to go on regular business trips to Jupiter?

More Like This
25 Great TV Shows About School To Watch As A Family
Watch Jack Black & Rita Ora Bring Their Kung Fu Panda Characters To Life
Kristin Bell Shared Some Sweet, Rare Photos Of Her Daughters From A Family Vacation
What Parents Need To Know About Marvel's New She-Hulk Series Coming To Disney+