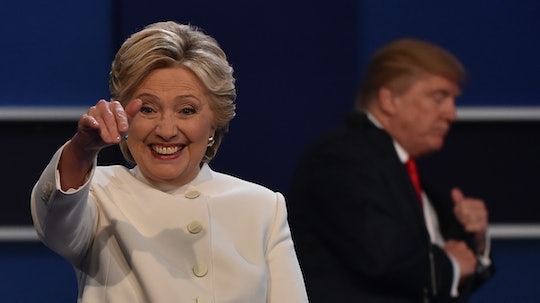 At the last presidential debate, Donald Trump made quite a few doozies as far as questionable comments go, not least of which calling Mexican immigrants "bad hombres." Yes, he actually said that. Near the end of the debate, he also called Hillary Clinton a "nasty woman," which did not go over well. But in the name of feminism, let's take back that word and embrace it, Janet Jackson style. Here are some "nasty" Hillary Clinton Halloween costumes that will make you look fabulous and fight the patriarchy at the same time.

The first thing you're going to need to dress up like the next nasty leader of the free world is the hair. I advise steering clear of any and all Hillary Clinton masks because they are extremely creepy and reminiscent of the Scream Queens episode in which Hester dresses up like Ivanka Trump and starts murdering people. For the wig, head straight to Amazon, naturally, which has everything anyone could ever need, presidential wigs included. This Hillary Clinton wig will give you the Secretary's signature and classic blond coif, without looking too cartoonish. Well, maybe a little cartoonish, but it's Halloween, so we'll except it. The next step is, obviously, to pick a pantsuit.

Clinton looked poised and precise in her white suit during the final debate on Wednesday, similar to this one from Lord & Taylor.

Of course, to make it "nasty", we have to throw in a little Janet Jackson.

If you want to make this a true blending of the minds, dress up as Hillary — just like a lot of other people this holiday season — and literally walk around with this song playing all night. Sure, it could get tiresome with your friend group, but I guarantee you'll have people turning heads (and thanking you, because let's be honest, nostalgia).