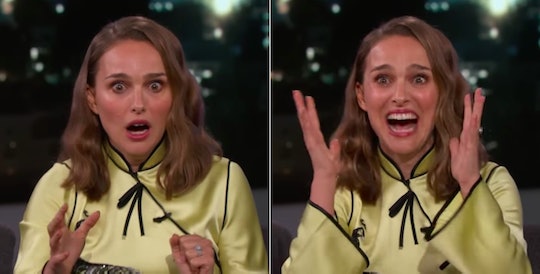 When you're pregnant, it is expected that you should expect the unexpected. Anything can happen at any point in time — especially during the third and final trimester. Going into labor is something that pregnant women hope to anticipate around the time of their due dates, but when the baby wants to come out, the baby will come out. Celebrities aren't exceptions to this — and during an interview on Jimmy Kimmel Live on Thursday night, it was revealed that Natalie Portman mistakenly thought her water broke and chaos ensued. Don't worry, Portman, you're definitely not alone in the confusion.

Portman gave birth to her second child, a girl named Amalia, almost exactly one year ago at the end of February, according to Vanity Fair, with husband Benjamin Millepeid. Portman remained a pretty private person throughout her pregnancy — and now, a year later, she is finally opening up about all of those little details about her pregnancy that fans are dying to know about. Case in point — her appearance on Jimmy Kimmel Live, where Portman discussed the moment she thought she was going into labor. Although she was pregnant with her second child at the time — Portman is already a mom to her 6-year-old son Aleph — she still knew to expect the worst.

"So my mom came at the end of my pregnancy...and we went to pick up my son from school," Portman told Kimmel. "And I go and pick him up and felt a little water on my leg and I look up and feel something dripping on me and I'm like 'Oh my god."

Water dripping at any moment during the last trimester of pregnancy (that doesn't belong to rain falling from the sky) can be any soon-to-be-mom's worst nightmare.

Portman explained to Kimmel that during her first pregnancy, her water had never broken, therefore she wasn't able to know what it felt like the first time around. So, as Portman told Kimmel, she immediately thought that the baby was on the way. "I was like 'Honey, honey, we've gotta go' and my son runs off to go play soccer and I'm like "No!."

After calling her doctor, her husband, and grabbing her son off the soccer field in a fit of panic, Portman revealed to Kimmel that her water breaking didn't feel normal at all. "I was like 'It's weird because it's only my legs that are wet,'" Portman told Kimmel. As Portman would soon find out, the source of the water was coming from her son's water bottle leaking onto her legs. "My water never broke," Portman told Kimmel. It's an honest mistake.

And so on Feb. 22, Portman and Millepied welcomed their daughter, Amalia, into the world two days before the Academy Awards, according to Us Weekly.

What happened to Portman could happen (and does happen) to anyone expecting a child — especially if you've never experienced having your water broken and have no idea what it might feel like. While having your water break in public is something that many expecting mothers might fear, it is not as common as some are led to believe. In an overwhelming amount of births, according to Parents, 80 percent of them begin with contractions, first, then water breaking. So by the time your water has been broke, you're probably already in the hospital or are aware that you're going into labor.

And while it is referred to as having your "water broke," it's not actually water that rushes down your legs. When your water breaks, it is the amniotic sac, or the fluid filled sac protecting your baby, that is bursting, according to MayoClinic. Unfortunately there isn't one universal way to know if your water is broken because having your water break feels different for everybody, according to Cosmopolitan. Some women report it having a certain smell while others report feeling a rushing sensation between their legs.

Still, Portman's hilarious story should be a learning experience. If you feel water running down your legs, check your surroundings first, for any nearby water bottles before calling your doctor to tell him you're in labor.