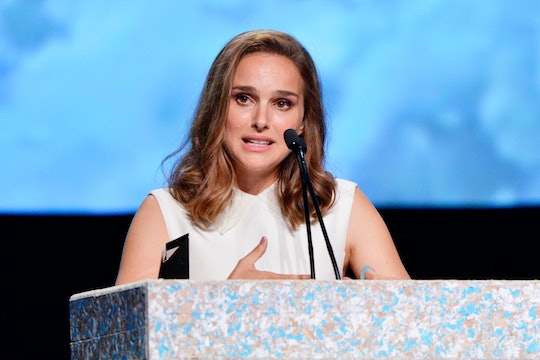 Parents only want what is best for their kids — they want to make sure they're watching the right things on TV, hanging out with the right people, and eating the right things. A healthy and balanced diet is pretty important to any person's health — and Natalie Portman has been an advocate for this as a long time vegetarian and vegan. So, it really shouldn't come as a surprise that Natalie Portman's children are vegetarian and vegan in her household — and her words are something that parents should listen to.

Portman's words about being vegan and vegetarian have brought awareness to the issue, as well as her new documentary with writer, Jonathan Safran-Foer called Eating Animals has the power to do the same. Portman became vegan in 2009, after reading Eating Animals, according to AM New York. And her veganism took her through her two pregnancies — in 2011, when she gave birth to her son, Aleph, and in 2017, when Portman gave birth to her daughter, Amalia, according to Us Weekly.

Because Portman kept up with this diet (although she did break during her first pregnancy, according to ABC News), it shouldn't be a surprise that she is still a vegan — and her kids are informed about her diet, too. Portman told Us Weekly that her whole household eats healthily and her kids eat a vegan and vegetarian diet. "We tend to eat vegan and vegetarian food in the house," Portman said, according to Us Weekly. "It becomes like the normal stuff that kids get used to."

Portman told AM New York that by eating a vegetarian and vegan diet inside of their home, her kids will be able to form a decision about what they want to eat. "My kids, I want them to make their own decisions," Portman said. "My son has become quite vegetarian and feels strongly about it. My daughter is too little to make the decision."

But Portman revealed that her husband, Benjamin Millpeid is not vegan, which comes up at the family dinner table quite often. Portman said, according to Us Weekly:

There had been conversations because my husband is not vegan, and so my son has asked, "Why do you eat that and mommy doesn't?" And I talked to him about it, and it's really changed. I think it's natural for children to relate to the stuff. I became vegetarian when I was nine, because, you know, you watch cartoons and animals have feelings and talk to each other and they're not...You think of them as like, emotive creatures, not as dinner.

Like Portman said — it's only natural for kids to be curious about everything, so of course Aleph would want to know why his father wasn't eating the same things as his mom. But from the sound of it, Portman's kids have a clear grasp on healthy eating and know why there aren't as many animal products in their household.

You can't blame Portman for raising her kids this way. While some people seem split on the issue, it is OK for children to be on a vegan diet, according to Shape, just as long as these kids are "eating enough nutrients, vitamins, and minerals" that they might get through beef, milk, and other non-vegetarian or vegan foods. It is also important, according to The Guardian, that parents are aware that their child needs to be eating a bit more on a vegan diet to get enough calories or energy in their body. But at the end of the day, raising kids on a vegan and vegetarian diet is possible with the right planning and knowledge, according to BBC Good Food.

Based on her interview with Us Weekly, it's clear that the family has conversations about what it means to be a vegan and vegetarian and that she isn't making her kids do anything that they wouldn't want to do. Portman told Us Weekly that her family still indulges in guilty pleasure foods, but those foods are healthy and don't contain animal products in them. "There's like tempeh bacon, you know, coconut milk, yogurt, cheese is made out of cashews, and all sorts of delicious things that they've figured out that are great replacements for those things you crave."

Portman's words about raising kids as vegetarian and vegan are so important. By giving kids healthy options and the option to choose what they want to eat, they're making the best decisions for themselves and you can't argue with that.