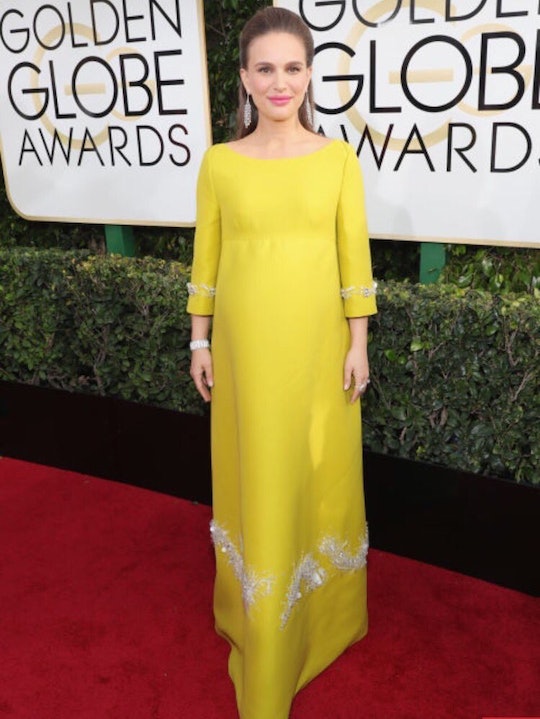 As anyone who's ever been pregnant knows, it can be a drag to find gorgeous (or at the very least, halfway attractive) formal maternity wear. Most maternity clothing options either look super tent-y or dowdy, or they look like something you'd grab off Forever 21's clearance racks circa 2011. Yet at the Golden Globes 2017, Natalie Portman, who was nominated for Best Actress in a motion picture for her portrayal of First Lady Jacqueline Kennedy in Jackie, definitively proved that elegant, breathtaking formal wear for mamas-to-be both exists and can be fabulous.

On the red carpet, Portman, 35, who is pregnant with her second child with choreographer husband Benjamin Millepied, debuted a floor-length, mustard-colored Prada gown with embellished sleeves that looked like it was ripped straight from the pages of 1960s Vogue.

Portman paired the garment with breathtaking drop earrings and a bracelet from Tiffany, which she said was from 1910. "I'm very lucky to get to borrow this, Cinderella-style," she told Ryan Seacrest on the E! News red carpet.

This isn't the first time Portman has slayed the maternity wear game on the red carpet. Last month, she flaunted her baby bump in a beaded, sequined Rodarte dress while attending the 2016 Gotham Awards with Millepied. And in 2011, Portman famously accepted the Academy Award for Best Actress for her performance in Black Swan while wearing a grape-colored, Swarovski crystal-embedded Rodarte dress, just a few months before she gave birth to her now 5-year-old son Aleph. She complemented the look with Tiffany & Co. jewelry and Jimmy Choo shoes.

While critics have consistently praised Portman's performance as First Lady Jacqueline Kennedy in the biopic Jackie, Portman's luck winning awards while preggo didn't carry over to her performance at the Golden Globes this year: instead, Isabelle Huppert won for her performance in Elle. One thing that is clear, however, is that her maternity style is absolutely on point, as fans on Twitter pointed out:

Portman has remained mum regarding the gender of her second child, as well as her due date. According to Us, Portman is set to give birth sometime around the Oscars, which would place her due date sometime around February 2017. Back in November, however, she told Tonight Show host Jimmy Fallon that she wasn't quite as pregnant as she looks.

"It's funny because I'm a small person in general and you show a lot faster and a lot more when you're small," Portman told Fallon on Nov. 29. "Everyone thinks I'm about to pop and about to give birth at any minute and I have months to go!"

Regardless of how "pregnant" or not pregnant Portman might look, one thing is for damn sure: mamas-to-be, we wish we could all look this good.