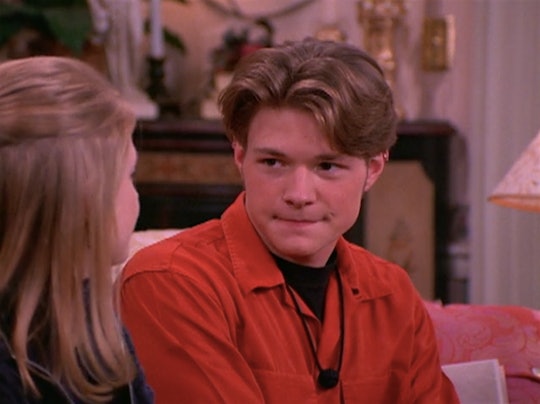 As the high school sweetheart in Sabrina the Teenage Witch, Harvey Kinkle was adored by nearly every fan of the show. Time hasn't dulled that devotion; even now I have friends who are eager to rhapsodize about Harvey whenever the series comes up in conversation. So what is it exactly that makes this character resonate so strongly with fans? There's no better person to answer that question than the man himself. Nate Richert, who played Harvey from 1996 to 2003, recently spoke with Romper and revealed one possible reason why Sabrina the Teenage Witch fans loved Harvey so much — and it wasn't just because of the floppy '90s hair and cartilage piercing. It was because Harvey and Sabrina's relationship wasn't quite as standard as it may seem at first glance.

Richert grew up in St. Paul, Minnesota and started acting when he was very young, landing commercials and print work as a kid before deciding to make the move to Los Angeles at 17 years old. After one pilot fizzled, Richert landed the role of Harvey, which proved to be an unexpected success. The sudden fame landed him in the pages of Tiger Beat and solidified his place as one of the very best fictional boyfriends of the decade.

I loved being the damsel in distress.

That kind of adoration would go to anyone's head, but Richert admits that he was unaware of his heartthrob status. "Honestly, I was pretty oblivious to that," he recalls. "I was pretty unaware of that aspect of it until the internet, Facebook, really." In the mid-90s there was no social media account to maintain or Google alerts that couldn't be avoided, which gave Richert some distance from fans and his own celebrity. That seems rather fitting since Harvey himself would probably be similarly unaware.

Richert remembers seeing Teen Beat in the grocery store when he was a kid, but says he didn't think much of them at the time. Even after he was being featured in those kinds of magazines himself, they didn't have much of an impact on his daily life. "I assumed it's good publicity for the show," he says. "That's as far as I thought it through."

But while he didn't dwell on his own fame, there was definitely one aspect of the show that caught his attention: how forward-thinking it was, especially when it came to inverting traditional gender roles. "At that time, I think it took a lot of people by surprise, this role reversal," Richert explains. "And I thought it was great." It's easy to be dismissive of Sabrina because it was so campy and broad, with an animatronic cat and plotlines that revolved around pancake addiction, but it had an influence on young girls that can't be discounted — and Harvey was a big part of that. For many, he became something of an ideal and that may be directly tied into his unusual position in the narrative.

Sure, Harvey was sweet and cute, but the affection fans have for him goes beyond the superficial. What was especially interesting about Harvey was that he was a love interest first and foremost to show's titular spell-caster, which isn't necessarily the kind of role male characters usually fulfill (usually they're the ones doing the saving). Perhaps the fact that the series was created by a woman, Nell Scovell, influenced both how female-led it was and the way it upended stereotypes, resulting in Harvey being a different kind of TV boyfriend. Sabrina was the hero and Harvey was there to serve her story. He reassured her, he cheered her on, and he was there to be rescued. It was a refreshing dynamic to see even in the girl power '90s, and it was something Richert appreciated too.

I loved being the damsel in distress. With the magic, there were so many predicaments that you could be put in, that really play that role reversal, which — today it's pretty standard, I hope. To have the strong, female lead who has to rescue the boy in distress. That was a big thing at the time.

Strong female heroes became more and more popular throughout the '90s (just look at Buffy Summers!) but having a male character take on a traditional, almost thankless "girlfriend" role is still fairly unique even today. As someone who grew up in the '90s, it was important to see a young male lead who was kind, respectful, and happy to have his girlfriend in the spotlight. And characters like Harvey are good representation for boys, too: they show kids of any gender that there isn't just one narrow box you have to fit into. Girls can be heroic and do it all. Boys can be supportive. Harvey may be the perfect love interest but he wasn't a typical one. And that might be one reason why Sabrina fans became so attached to him.

Since his time on Sabrina, Richert has devoted a lot of his time to pursuing music; he keeps fans updated about any new developments in his career on his website. But he also remains interested in acting. In fact, he would even be up for revisiting Sabrina if the opportunity arose. When asked if he'd ever want to appear in the upcoming Netflix reboot of the show, he says, "Oh, sure, of course I would. That would be so much fun." He has an idea of how he could fit in with the new version's much creepier tone, too: "If I just popped up as a murderer or something, you know, nobody would recognize me."

Fans of Harvey Kinkle would definitely be thrilled to see him again, even if the context is far removed from his days of playing the dreamy "damsel" we all came to know and love.