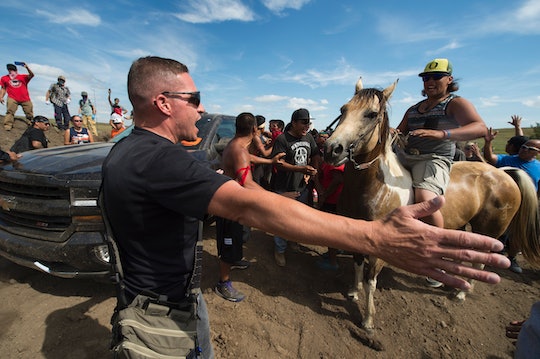 Speaking out is human nature. If people are unhappy about issues — protests are a great way to stand as a group and initiate a social change and conversation. Protests are completely fair and legal but sometimes can take an unfortunate turn for the worse, with the issues of the protest getting lost in translation. This was the exact case on Saturday, when peaceful Native American oil pipeline protests became violent for several very sad and understandable reasons, but one recent one in particular.

Over the past two weeks, the Native American Standing Rock Sioux Tribe and its supporters have been protesting a 1,170-mile oil pipeline that will come in close contact with the tribe's reservation, which is located in rural North Dakota. According to The New York Times, the tribe worries that a leak or spill in the pipeline could potentially ruin the land. Members also see the pipeline as a threat to their culture, as the pipeline also runs into part of ancient burial grounds (which are not part of the reservation).

On Saturday, however, those ancient burial grounds were compromised, sparking a violent standoff between protesters and officials. According to ABC News, tribal officials said that nearby construction crews had allegedly "destroyed American Indian burial and cultural sites on private land" in North Dakota — and that's when things went south. As a result of the alleged destruction, "four private security guards and two guard dogs were injured" after "several hundred" protesters confronted the construction crews on that land." According to ABC reporters, the officers were taken to the hospital and the dogs were taken to the vet to be treated for their injuries.

While law enforcement authorities told ABC News there had been no reported injuries to the protesters, tribe spokesman Steve Sitting Bear told ABC News that six protestors had in fact been allegedly bitten by the security dogs and several more had reportedly been pepper sprayed.

"The demolition is devastating," Standing Rock Sioux chairman David Archambault II said in a statement obtained by ABC News. "These grounds are the resting places of our ancestors. The ancient cairns and stone prayer rings there cannot be replaced. In one day, our sacred land has turned into hollow ground."

Police on the other hand painted a different picture of the violence that occurred on Saturday. "Individuals crossed onto private property and accosted private security guards with wooden posts and flag poles," Morton County Sheriff Kirchmeier said in a statement obtained by NBC News. "Any suggestion that today's event was a peaceful protest is false."

According to The New York Times, pipeline spills occur regularly — sometimes resulting in small spills or catastrophic results. Therefore, whatever the argument for the alleged intrusion may be, the Native American's fears of a lack of protection towards their environment are rightfully justified. It only makes sense that members might be fearful of any potential damage to their environment and culture.

No protest should ever have to result to violence to spread their message. Unfortunately, when a group's land and culture is at stake, that message can get lost when emotion takes over on both sides of the aisle. Saturday's violence is just another example of this.