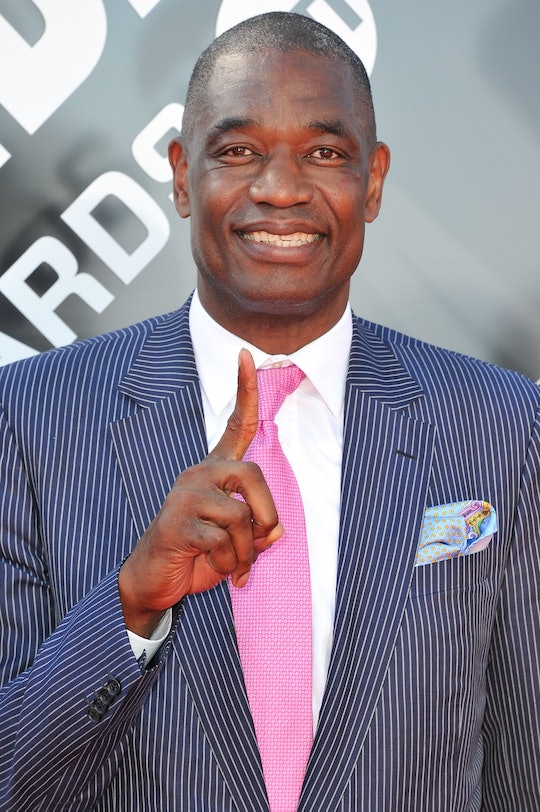 Even when you're someone who has amassed an unbelievable amount of privilege through your own successes, it's unfortunately not a given that you'll use your power and position to give back, but Dikembe Mutombo is here to remind us that genuinely good people really do exist in the world. In fact, the NBA legend's act of kindness for an 8-year-old boy with a facial tumor will leave you feeling so inspired.

The story starts with a boy from Africa who, for the entirety of his life, has been battling an oversized tumor on his face, one that has left him shunned at home, as ABC 7 reported. Mutombo heard about the boy's story, and TMZ reported that he actually flew the boy back to Los Angeles, and arranged for his surgery here.

"I was touched by what he's going through as a young boy who is 8 years old. Not going to school. The way he's been pushed away by the society," Mutombo told TMZ. "His mom has to keep him in the bedroom every day because people are talking bad about him."

The boy arrived in the states on Dec. 12, according to Bleacher Report, so updates regarding the success of the surgery are not yet available, but, providing that medical matters remain private, we can likely look forward to updates from Mutombo in the coming days and weeks.

However, this wouldn't be the first time Mutombo displayed his earnest desire to give back and do good in the world.

In fact, NBA.com reported that Mutombo is considered to be one of the most generous athletes in the world by Fox Sports. In an interview, Mutombo opened up about why he feels so passionately about helping his home country. “It is a nice feeling to know that others recognize the work that we are doing for the people of my hometown in Kinshasa,” he began, according to NBA.com, then going on to explain:

But for me, the real reward will be the day I walk into this new building and see people receiving the vital care that they need. For me, that will be a great feeling. Kinshasa lives inside of me and I have made it my purpose to help ensure that the children of the Congo will have access to the same types of medical facilities that are common in many other parts of the world. When you are born in such poverty, where you go in your life, whether you become the president or the CEO of a company, you never forget where you come from.

Mutombo went on to say in the same interview that he feels it is his "duty" to give back, given how incredibly fortunate he believes he's been in his life and his career.

As the 8-year-old just arrived in the United States just yesterday, it's unlikely that we'll be hearing any updates on his status or condition until days or weeks after his surgery, the date of which has not been disclosed yet. Regardless, it's so reassuring and refreshing to see people like Mutombo helping others in such a profound way, and encouraging to know that there are still people out there wholly committed to giving back and making the world a better place.