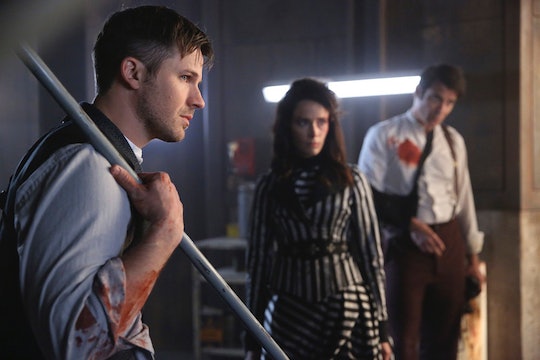 'Timeless' Was Cancelled But It's Not Over Yet

Lately it feels like even when a show is cancelled, it might not be a total goner. The trend towards revivals has brought Gilmore Girls and Arrested Development back to life after years off the air; when Brooklyn Nine-Nine got the axe, another network offered to scoop it back up for one more season. If fans make enough of a ruckus, it seems like they have a real chance of being heard. Now, NBC has revived Timeless for a two-part finale, which has fans celebrating on Twitter.

This isn't the first time Timeless has been saved from the brink. The series follows a trio of characters as they jump through time to prevent a shadowy organization from changing history as they know it. It was initially cancelled after just one season, but then NBC decided to bring it back for a second season after all. It was cancelled one more time, but it still wasn't the end. Now, the show will be back one more time to tie up any loose ends in its extra-long finale. It's kind of fitting that a show about time travel would get so many second chances.

While the two-part special won't be quite the same thing as a third season, it does offer fans more closure than they would have gotten otherwise. And the creators are just as delighted as viewers to have a proper ending.

It's especially welcome after Season 2 of Timeless ended on a cliffhanger. Now that uncertain conclusion will have the chance to resolve. Those that love the show might continue to wish for more, but the two-part finale isn't a bad parting gift at all. Executive producers Shawn Ryan and Eric Kripke released a joint statement expressing how they felt about the mini revival — and they owed it all to their viewers.

"While we wish we could've made another dozen seasons of Timeless, this is the next best thing," Ryan and Kripke said, as reported by TVLine. "We're thrilled to take the Lifeboat out for one last spin and bring closure to our story. The studio, network, cast and crew are all doing this for one reason only: the fans. Because they deserve it. Because the fans made this happen and we thank them for their passion, support and helicopters. So? You guys want to get Rufus back or what?"

Initially, Ryan mentioned on Twitter that even though Season 3 was unlikely, Sony was searching for another network or service that could continue to host the show. But there were a lot of things to take into account, including the actors' contracts, and new seasons became an impossibility. With that option off the table, a finale is the best way to give the show (and its audience) a chance to say goodbye.

Some fans on Twitter insisted that this still won't be the end. It's easy to see why the show continuing to live on might feel very plausible. It survived two cancellations already, and game-changing streaming services have rescued shows before (like Hulu picking up The Mindy Project after Fox let it go). However, it does seem like this will be Timeless' final attempt at a finale, unless they really do have access to a time machine.

According to IGN, all of the major actors will be returning for the finale, including Abigail Spencer, Matt Lanter, Malcolm Barrett, Goran Višnjić, Paterson Joseph, Sakina Jaffrey and Claudia Doumit. No specific air date has been announced yet. There might be a short wait before Timeless' last hurrah, but it'll be back (for the third time!) before you know it.