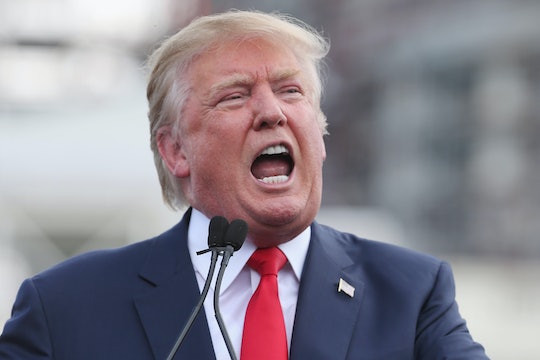 Unfortunately, that headline is not a joke, and it only gets worse. If you're one of those people who feels the urge to punch a wall whenever you hear Donald Trump's name, this is going to be very hard for you to read. According to The New York Times, exit polls at the South Carolina primary revealed some shockingly intolerant results, including the fact that nearly 20 percent of Trump supporters disagreed with freeing slaves in Southern states after the Civil War. In fact, a full 70 percent think that the Confederate flag should still be flying over the State Capitol, and 38 percent wish that the South had won the Civil War.

The group apparently has enough intolerance to share with the whole class, too; 80 percent support banning Muslims from entering the United States. Sadly, that's not too big of a surprise, since it's kind of Trump's whole thing lately, but his acolytes don't stop there; 40 percent want to shut down U.S. mosques, 62 percent support a national Muslim database, and 44 percent say that Islam should be illegal in the U.S. (I feel like I need to add a disclaimer to every paragraph that this is not some kind of sick joke).

But, wait! There's so much more hate to go around. A shocking 32 percent thought that the Japanese internment camps during World War II were a good idea, and 31 percent support a ban on gay people entering the U.S. A full 16 percent actually believe that whites are the "superior race," and had the stones to actually admit that belief to another human being. I can't even. Another 14 percent answered "not sure" to that question, which is honestly just confusing to me. Either you're racist or you're not. What kind of data are you waiting on before you come to a conclusion on that?