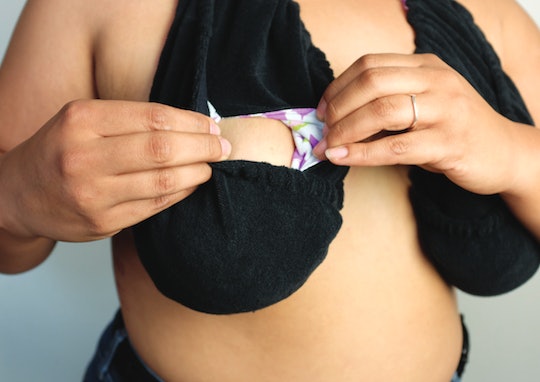 By now, you've probably heard of the genius invention and viral sensation known as the Ta-Ta Towel. Like the name indicates, they act as a moisture-absorbing towel for your boobs. Since I'm a card-carrying member of the Itty Bitty Committee, I'm not too familiar with the persistent problem of perspiration occurring in the area where your breasts and torso meet. But when I got pregnant, it seemed I also hit puberty because I jumped up — albeit, temporarily — two cup sizes. That's why Ta-Ta Towel's new maternity line is a great find for women who are pregnant, nursing, or postpartum.

If you're not too familiar with this game-changing solution to the sweaty under-boob issue, it's surprisingly simple. Perhaps that's the genius of this invention, too. According to an official press release from the pioneering Ta-Ta Towel company, "its halter-style design pairs functional terrycloth with an ultra-soft breathable liner, comfortably eliminating moisture from the breasts and neck — without the pressure or discomfort of a traditional bra." That right there pretty much says it all, doesn't it? Since this product has soared in popularity amongst women, the Ta-Ta Towel has a new arrival of its own with a new line made specifically for pregnant moms-to-be, lactating new moms, and postpartum women everywhere.

Basically, it's the same concept as the Ta-Ta Towel, but there are added features that are perfect for pregnant women and new moms. According to the burgeoning bosom buddy brand, "the Maternity Ta-Ta Towel features overlapping fabric panels for each breast, providing easy access for nursing or pumping." I love the fact that the material opens without the need for a button or clasp, which can be quite uncomfortable or inconvenient. Since the product is fabric, it takes on your shape rather than a traditional bra having a rigid form or underwire. So having a soft, hardware-free support system for your breasts during or after pregnancy is truly game changing.

As any breast-endowed person or nursing mother will tell you, combining comfort, functionality, and style is arguably the holy grail of bra priorities. The whole "no underwire, no hooks, no straps" concept from Ta-Ta Towel is hard to beat. Besides the breathable lining, soft outer fabric, lack of metal poking you, and super convenient opening for nursing, the new maternity line from Ta-Ta Towel still has more to offer. Featuring a "snug yet stretchable fabric and drawstring halter designed to accommodate fluctuating breast size," according to the press release, it's reassuring to know that this phenomenal product will grow with you. Essentially, this eliminates the need to buy multiple bras, for varying purposes, over the course of your journey through motherhood.

It should be warned, though, that while it functions as a bra — support! — it is also... a towel. That means there is some bulk to it, so depending on what you're wearing and where you're heading, this might not be the best option to take with you on a social outing or errand run. For new moms though, comfort is key, so the fact that you have a small towel under your shirt may not phase you.

Around the house though, you're not going to want to wear much else.

An added bonus that will make any exhausted mom-to-be or veteran parent happy is the fact that the new maternity version of Ta-Ta Towel can be easily tossed in the washing machine and hung out to dry. How effortless is that? You could even stock up on these so that you won't be left stranded and sweaty when laundry day inevitably comes around. Because, let's be honest, who has the time to sort and fold copious amounts of laundry anyway? Thanks to the durable design of the maternity style Ta-Ta Towel, you don't have to waste any of that precious resource known as time on taking special care of your delicate lingerie.

With the straightforward catchphrase, "Keep them high. Keep them dry," you know exactly what you're going to get when you invest in the quality purchase of a Ta-Ta Towel. What you may not have expected, though, is just how convenient and comfortable this invention is. The new arrival of this life-changing maternity line is definitely a pleasant surprise.