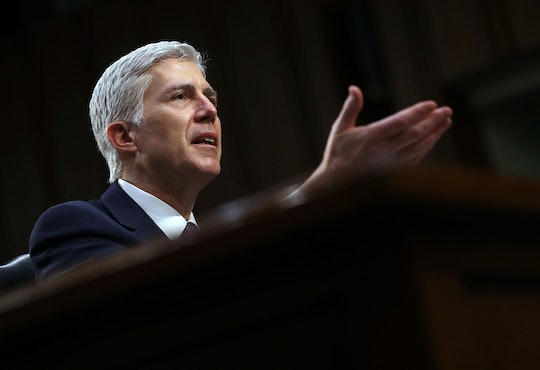 Neil Gorsuch, the 49-year-old Colorado native nominated by President Donald Trump in February to be a justice on the U.S. Supreme Court, is currently facing Senate hearings for his confirmation. He could also be facing a filibuster from some senators, including Senate Minority Leader Charles E. Schumer of New York. Under Senate rules, Gorsuch needs 60 votes to overcome a filibuster, and Republicans eager to confirm Gorsuch have only 52 senators, not enough to block such a move. With all this talk of Gorsuch's possible confirmation to the Court, it's a good time to look at some of his past decisions as a judge to see how he might act as a member of the Supreme Court. And some of Neil Gorsuch's important opinions certainly show his conservative bent as a member of the judiciary.

Gorsuch was previously on the 10th U.S. Circuit Court of Appeals in Denver, Colorado, according to The Washington Post. And many more liberal Democrats are pressuring senators to block his confirmation. But why? Well, Schumer in particular has said that Gorsuch “was unable to sufficiently convince me that he’d be an independent check” on Trump, and that Gorsuch is “not a neutral legal mind but someone with a deep-seated conservative ideology." If we take a look at some of Gorsuch's past opinions, that "conservative ideology" is fairly apparent.

The Hobby Lobby case is a relatively recent and particularly well-known one. Just a few years ago, the craft store chain sued to challenge the requirement in the Affordable Care Act — also known as Obamacare — that an employer’s insurance policy has to cover at least one brand of each of the 16 different kinds of birth control available to women.

The 10th Circuit, with Gorsuch's agreement, decided that federal law prohibited the requirement from applying to closely held corporations. The U.S. Supreme Court later upheld that ruling in a controversial 5-4 decision.

In his opinion on the matter, Gorsuch was quoted as saying, according to the Denver Post:

It is not for secular courts to rewrite the religious complaint of a faithful adherent, or to decide whether a religious teaching about complicity imposes ‘too much’ moral disapproval on those only ‘indirectly’ assisting wrongful conduct.

Gorsuch's defense of religious freedom, and specifically his argument that the ACA would make businesses “underwrite payments for drugs or devices that can have the effect of destroying a fertilized human egg," according to the Denver Post, have a decidedly conservative inclination that indicates that he might be an advocate for personhood amendments or arguments.

Little Sisters of the Poor Home for the Aged vs. Burwell, 2015

According to the Denver Post, following the Hobby Lobby case, the Denver-based Little Sisters of the Poor challenged the birth-control mandate on a different set of legal grounds. The ruling in this case found that the health care law allows nonprofits to opt out — but the Catholic Little Sisters suggested it still burdened their "religious exercise."

In this case, Gorsuch joined a dissenting opinion and argued for a full court review. He was quoted as such in his opinion, according to the Denver Post:

When a law demands that a person do something the person considers sinful, and the penalty for refusal is a large financial penalty, then the law imposes a substantial burden on that person’s free exercise of religion.

The Supreme Court sent the case back at a later date to lower courts to find a settlement that could accommodate the order’s religious beliefs. Gorsuch's findings in that case again aligned with a conservative viewpoint.

Last year, Utah Gov. Gary Herbert ordered the state to stop providing money to Planned Parenthood after the release of videos regarding the alleged sale of fetal tissue, which were later heavily disputed and finally proven to be totally false. Planned Parenthood of Utah then sued to block the order.

The ruling that followed blocked Utah’s governor from cutting off funding for Planned Parenthood, according to the Los Angeles Times. Gorsuch authored a dissenting opinion and said, "the majority acted too quickly and without looking at all the facts." This quote suggested that he thought the governor's actions were, in fact, lawful, according to the Los Angeles Times:

It is undisputed that the governor was free as a matter of law to suspend the funding in question for this reason.

In this case, a defendant wanted to accept a 10-year term for a guilty plea on a second-degree murder charge, but his counsel refused to represent him if he took that deal. The case ruling was that, "a defendant is prejudiced when his attorney’s deficient performance leads him to forego a plea deal and face a fair trial," as reported by CBS News.

In that case, the question was whether a defendant’s right to effective counsel was violated, and the 10th Circuit ruled that it was. When Sen. Dick Durbin from Illinois question Gorsuch during his confirmation hearing about his dissent, Gorsuch stated that the defendant had a “fair trial," and went on to say that he believes the Sixth Amendment allows for a fair and free trial for everyone.

“That’s not the point,” Durbin said, according to CBS News, and he added that the defendant, "was misled by the incompetence of his counsel to turn down a 10-year plea deal and faced a life sentence ultimately." This case was just one example of the Supreme Court going on to rule that Gorsuch’s position was wrong, with the Court later settling on a 5-4 decision in the case, as reported by CBS News.

In an interesting turn of events, another decision Gorsuch made, back in 2008 and regarding an autistic child's education, was struck down unanimously by the Supreme Court during his Supreme Court confirmation hearing, according to TIME. Talk about bad timing.

That 10th Circuit decision relied on a 2008 opinion written by Gorsuch, and the case centered on public schools providing education for children under the federal Individuals with Disabilities Education Act (IDEA). That act requires American schools to guarantee eligible children an "appropriate education in the least restrictive environment," according to Forbes.

However, it's been unclear "what constitutes sufficient progress" to show that children are getting that education in a non-restrictive environment, Forbes reported. Gorsuch and the 10th U.S. Circuit Court of Appeals argued that the bar for that is very low. In this case, this bar was too low for the parents of an autistic child in a district in Colorado, where their son was making what they believed to be very limited progress.

Instead, they had him transferred to a school that offered specialized services, where he did make progress. The parents then sued to have the public school district pay for the schooling in that specialized environment, because they believed the public school had failed to give their son the appropriate education that was guaranteed to him by federal law, as reported by Forbes.

SCOTUS decided that the standard for school districts following IDEA that the 10th Circuit set, "required them only to add some limited value to the educational attainments of special ed students," and denied these students their right to a individualized plan and the ability to progress, according to New York Magazine. Gorsuch backed that standard set by the 10th Circuit.

So in this case, Gorsuch essentially argued that the student only needed to progress more than the bare minimum acceptable, which seems like an incredibly low bar.

When questioned about the Supreme Court's ruling, TIME reported that Gorsuch said:

I understand today that the Supreme Court has indicated that the Urban standard is incorrect. That’s fine, I will follow the law. … If I was wrong, Senator, I was wrong because I was bound by circuit precedent, and I’m sorry.

There are several other decisions of Gorsuch's that are easy to research, and there's a clear conservative proclivity in many of them. It's no wonder that some politicians on the other end of the political spectrum — and a lot of experts, activists, and citizens — are concerned with allowing him to sit on the highest Court in the land.