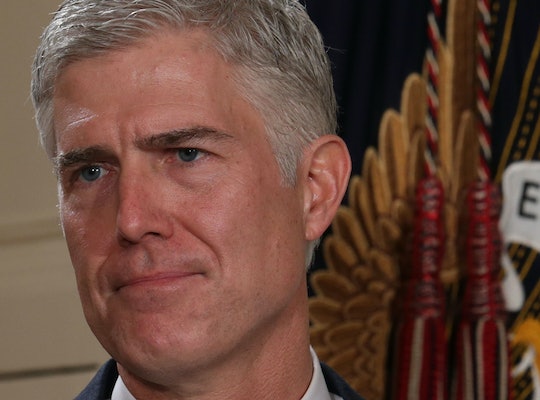 For the second time since former Justice Antonin Scalia died, a new judge has been picked to fill the empty seat in the Supreme Court: On Tuesday evening, President Donald Trump nominated Judge Neil Gorsuch for the role, sending Americans straight to Google in order to get the details on the 49-year-old nominee from Colorado. By now, many know that he's the youngest judge to be nominated, that he comes from a conservative background, and that several Democrats want to block his confirmation. For those who want to know more, though, a look at Gorsuch's most controversial rulings should give people an idea of what the newest Supreme Court nominee is all about.

Two of the most famous cases on Gorsuch's record are likely Burwell v. Hobby Lobby Stores, Inc. and Little Sisters of the Poor Home for the Aged v. Burwell. Due to Affordable Care Act requirements, both companies were supposed to provide their employees with health insurance that covered birth control needs — a requirement that both companies said went against their religious beliefs. According to The Chicago Tribune, Gorsuch later explained his decision to side with the companies, writing in an opinion piece:

Ordering their companies to provide insurance coverage for drugs or devices whose use is inconsistent with their faith itself violates their faith, representing a degree of complicity their religion disallows.

A third case highlights Gorsuch's belief that many government agencies are allowed too much judicial, legislative, and federal power. Usually, the Supreme Court will defer to a government agency's interpretation of a law — but Gorsuch believes that hands agencies too much power. In a 2016 case in which immigration officers came head-to-head with the courts, Gorsuch said immigration officials had overstepped their authority by deciding to apply their own interpretation of a new court ruling to cases that were pending when the rule was announced.

According to CNN, he explained that the Supreme Court's tendency to defer to federal agencies allowed "executive bureaucracies to swallow huge amounts of core judicial and legislative power and concentrate federal power ... Maybe the time has come to face the behemoth."

Gorsuch is also known for having dismissed a lawsuit brought against the city of Lafayette, Colorado by the parents of Ryan Wilson, according to Newsweek. Wilson, a 22-year-old, died after a police officer stunned him with a Taser — but Gorsuch said the officer had qualified immunity, and ruled that no excessive force was used.

In other cases, Gorsuch has argued against allowing Congress to hand too much power over to the Executive Branch and disagreed with officers' unlawful searches of private property. According to Politico, he has also ruled that there should be an internet sales tax for businesses that ship from out-of-state, and stood against the arrest of a seventh-grader who was arrested for disrupting his class.

As far as possible Supreme Court justices go, Gorsuch is something of a mixed bag — whether that's a good thing or not remains to be seen.