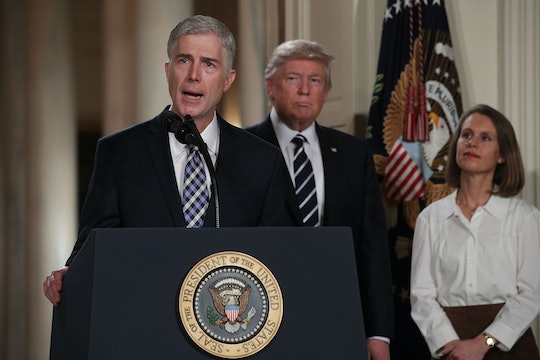 On Tuesday, President Trump announced his nominee for the Supreme Court, sending Senate Democrats into a tailspin. Doing good on his promise to appoint a conservative to the spot, which would tip the scales to the right in the highest court in the land, Trump's pick appears to agree with the president on the most controversial social, political, and economic issues. Neil Gorsuch's quotes on immigration and refugees show his stance on the issues, and may give clues about how he'd vote in Supreme Court rulings.

Senate Democrats have declared their intention to filibuster the appointment of Gorsuch, in large part because they believe that the constitution has been side-stepped by Senate Republicans, who refused to give a hearing to President Obama's nominee last year. This vacant seat on the Supreme Court showed up almost a year ago when justice Anthony Scalia died. Obama's nominee, Merrick Garland, was regarded by many as being a more moderate choice. With the current Supreme Court in a 4-4 split between parties, appointing a moderate would be the closest thing to compromise.

Gorsuch, meanwhile, is staunchly conservative. Unlike a lot of Trump's cabinet picks thus far, however, he's also very experienced and highly educated as it pertains to the position for which he is being considered. While respect for Gorsuch exists across the aisle, in terms of the rulings he's made in the 10th Circuit Court of Appeals in Colorado he most often rules according to conservative beliefs. When it comes to immigration and the subject of refugees, Gorsuch has made some significant statements about the legal process.

He took to task the ruling of a very high profile immigration case, which had produced a facet of administrative law known as the Chevron deference, which comes into play when agencies bump up against the federal government. Chevron rules that, "The Supreme Court held that courts should defer to agency interpretations of such statutes unless they are unreasonable."

Citing this in the context of an immigration appeals case he was overseeing, Gorsuch produced a 22-page-long case against the idea that agencies should be allowed to interpret the law in such a way:

Where in all this does a court interpret the law and say what it is? When does a court independently decide what the statute means and whether it has or has not vested a legal right in a person?

He explained that, particularly for immigration cases, the ambiguity of multiple laws and statutes may permit agencies to more or less choose the one that suits them at the expense of the lives of individuals. In the case he refers to, a man was denied citizenship even though he'd gone through the proper process because new penalties were applied to his case retroactively.

This happened more or less because the Attorney General and the Board of Immigration Appeals (BIA) didn't have consistent interpretations of the provisions that were meant to clarify what kinds of decisions they were allowed to make. At times, the BIA's own interpretations were actually conflicting.

Gorsuch found all of this troubling, and he wrote:

Yet the BIA now seeks to apply a new law to block that path at a time when it’s too late for Mr. Gutierrez-Brizuela to alter his conduct. Meaning that, if we allowed the BIA to apply Briones here, Mr. Gutierrez-Brizuela would lose the seven years he could’ve spent complying with the BIA’s ten year waiting period and instead have to start that waiting period now. The due process concerns are obvious: whenMr. Gutierrez-Brizuela made his choice, he had no notice of the law the BIA now seeks to apply. And the equal protection problems are obvious too: if the agency were free to change the law retroactively based on shifting political winds, it could use that power to punish politically disfavored groups or individuals for conduct they can no longer alter.

He went on to add:

Gorsuch also directly called out "federal bureaucrats" for "interpreting the law as they see fit", adding that it forced the public to play guessing games.

. . .the problem remains that courts are not fulfilling their duty to interpret the law and declare invalid agency actions inconsistent with those interpretations in the cases and controversies that come before them. A duty expressly assigned to them by the APA and one often likely compelled by the Constitution itself. That’s a problem for the judiciary. And it is a problem for the people whose liberties may now be impaired not by an independent decision maker seeking to declare the law’s meaning as fairly as possible — the decision maker promised to them by law — but by an avowedly politicized administrative agent seeking to pursue whatever policy whim may rule the day. . . .

He felt that the only just way to make sense of these murky waters of law was for agencies to "weigh” the costs the petitioner would encounter against the "benefits the agency would enjoy."

Much of Gorsuch's philosophical quandaries regarding the role of the law stem from the fact that he's something of a constitutional purist, which means that he believes the constitution should be interpreted and upheld in exactly the manner in which the founding fathers wrote it (called "originalism", a belief also held by justice Scalia, who Gorsuch would be replacing).

Such a belief system in a justice certainly makes Gorsuch an interesting choice for Trump when it comes to the subject of immigration. The executive order signed by the president last week set into motion a travel ban involving several Muslim-majority countries. Lawsuits agains the president coming from the ACLU and beyond call the order unconstitutional and specifically cite the Fifth Amendment. If Gorsuch were to be involved in a Supreme Court ruling on the situation, given his belief that the constitution should be followed to the letter, he would either vote against the order or be forced to question the political belief system that has dictated his career up until this point.