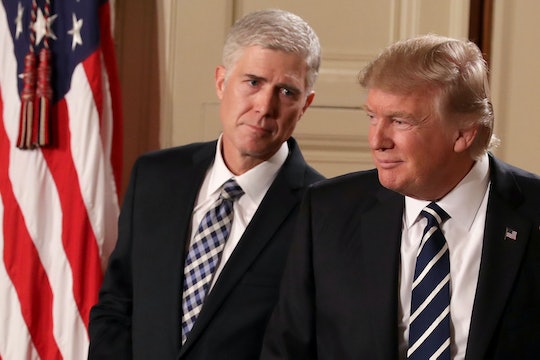 During a "VERY IMPORTANT" primetime announcement Tuesday night, President Donald Trump announced that Judge Neil Gorsuch was his nominee to the Supreme Court. Gorsuch is meant to replace the late Justice Antonin Scalia, who died last year. One of Trump's biggest talking points during his campaign was the idea that he would put a "pro-life" judge on the Court, but did he stick to that? What is Neil Gorsuch's stance on abortion? The 10th Circuit Court of Appeals judge, who is based in Denver, has never ruled directly on the issue, but he has been involved in a few cases that hint at where he stands.

First, many people say that Gorsuch's book, The Future of Assisted Suicide and Euthanasia, contains lines that indicate that he would be anti-abortion. One specific line that drops that hint is "all human beings are intrinsically valuable and the intentional taking of human life by private persons is always wrong," according to The Washington Post. Still, let's give the guy the benefit of the doubt: that specific phrase does not say that life begins at conception or fertilization, which are the two beliefs one has to hold in order to think that abortion is the "taking of human life by private persons."

The ACA’s mandate requires them to violate their religious faith by forcing them to lend an impermissible degree of assistance to conduct their religion teaches to be gravely wrong.

The Supreme Court ultimately upheld that finding. That religious protection seems to mean that Gorsuch might support the idea that religion trumps women's healthcare in certain instances, which doesn't look good for abortion rights. But what really seals the deal and gives Gorsuch an anti-abortion stamp might be an additional comment he made regarding the Hobby Lobby case. He said that some of the contraceptives required under the Affordable Care Act mandate would require businesses to "underwrite payments for drugs or devices that can have the effect of destroying a fertilized human egg," which would violate their religious beliefs.

Now, science and courts have always said that a fertilized egg is not a human and it does not have rights. The above statement contradicts that idea, which makes it pretty terrifying.

In addition to those statements, NARAL Pro-Choice America also found that Gorsuch has donated money to anti-choice politicians. And, as if this wasn't enough evidence of where Gorsuch stands without seeing him vote directly on the matter, he once wrote that requiring hospitals to provide abortions was an example of "the courts [feeling] free to override the conscience of health care providers," according to Slate. Translated from legal speak, that means that he thinks doctors shouldn't have to provide certain care to women (or, in an analogous case, transgender people) if they disagree with it on a religious basis.

Start supporting and donating to reproductive health organizations, because things do not look good.