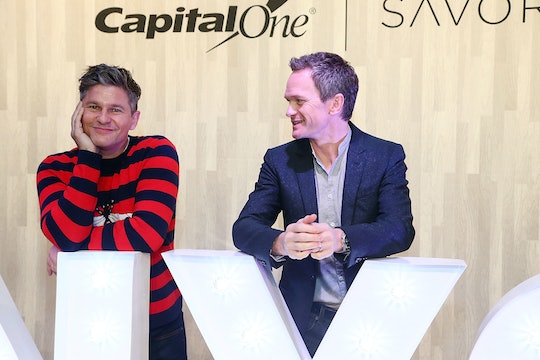 Neil Patrick Harris and his husband, David Burtka, are preparing to attend the New York City Wine & Food Festival, and their kids are nowhere in sight. That's the point, of course, and one that's important for both Harris and Burtka to continue to make: they have a life outside of their children; a life that allows them to raise money for charities; a life that celebrates food — a big passion of David's, who Neil describes as an outstanding chef — and a life that doesn't placate to their children's wishes. Easier said than done, of course, but refusing to treat their kids like kids has worked out for the power couple and arguably this country's ultimate #DadGoals. And as they sit in the back of a cozy restaurant a block away from the festival, sipping on coffee and discussing family meal time, it's obvious that the couple and fathers to 8-year-old twins Harper and Gideon are onto something.

"We don’t treat them like kids necessarily," Burtka says, "and I never made two meals." The idea that parents should give up their culinary tastes in favor of easy albeit bland meals their kids are sure to love is lost on the chef, who is preparing to debut his first cook book dedicated to his two passions: dining and entertainment. "I never placated to my child. We had a birthday party yesterday and some of these kids, I couldn’t believe it. I don't know what some of these parents are doing."

Neil chimes in with a grin. "You'd be surprised, when kids get hungry, what they'll eat," he says. "I fully believe that if they only ask for pasta with no sauce all the time and you're just constantly giving them that then you'll get into that routine. But we say, 'Right, I'm sure you do like pasta with no sauce, but we're having pasta with this sauce and you should try it.' And eventually they'll try it."

That's not to say Neil and David's children aren't the center of their universe: they are. But the couple knows how important it is to take care of one another and cultivate their own passions and endeavors outside of their children and in order to create a safe, nurturing environment for their kids.

"Becoming a parent, a lot of people feel that they’re there to take care of their kids now, but we really feel that we have to take care of each other," David says. "You have to have that date night at least every other week, if not every week, because if the kids don't see your bond together, they won't feel safe. And they have to feel safe with their parents and that their parents are getting along." After all, David says, as parents you came first and the kids came second. "I feel like a lot of our generation, we grew up with these parent who were miserable their whole lives because they just took care off kids and didn’t have a life," David says, "So, I think it’s really important of them to see that you’re living your life to its fullest and they will live their life to its fullest."

For the couple, dinner time is vital, and sitting down to eat as a family is always a must.

Neil acknowledges that their kids aren't always thrilled when they enjoy a night out on the town to see a play or attend a charity event, but for him showing his 8-year-old twins that it's normal, OK, and beneficial for everyone that their parents have their own time is important. "Yeah, they get mad if we go out sometimes at night, and they want to pitch a fit and say how sad they are that we go see shows sometimes or go to charity events and don’t get to put them down every night," he says. "And I just say, 'Yeah, but that’s how we operate. We love you, we’ll be back and I’ll give you a kiss when we’re back, but some nights we’re not going to be putting you down and that’s OK.' That’s our family dynamic."

And, of course, the family dynamic is on display and coming in handy now that Neil and David have partnered with Capital One to introduce their new Savor card, which rewards consumers who enjoy dining out and entertaining as much as the power-couple does.

"Harper was very upset that we were leaving all day long, and she said, 'Why do you have to do this food and wine festival? Why do you have to be gone?'," David says. "And I said, 'You know what, it's for Food Bank of America. It's for No Kid Hungry. We're raising money for kids who don't have any food. Imagine growing up like that."

"Our son, the other day said, 'You know, I’m really starting to trust you with the things you ask me to do, because the things you’re asking me to do I tend to really like.'"

"That was a much better conversation than I had with Gideon," Neil chimes in, holding back laughter. "He was still asleep when we left and I went up and gave him a kiss and said, 'I gotta go. I’ll see you later.' And he kind of woke up and said, 'Capital One again?' and I said, ‘Yep.' And he said, “OK papa!' and went back to sleep."

Of course, that's not to say that family time isn't extremely important or something that David and Neil don't prioritize. For the couple, dinner time is vital, and sitting down to eat as a family is always a must. But at the Harris-Burtka household you're not going to be served bland or boxed macaroni and cheese, and you're likely to receive a geography or science lesson as a side. Not only does the couple use it as a chance to check-in with everyone — Neil relies on an old family tradition called "My Day, By," which encourages the children to share play-by-plays of their day, from the time they wake up to the present — but it's an opportunity to discuss different countries, cultures, math, science, and manners.

"Growing up in Michigan we always sat down at the dinner table as a family and had family dinner and my parents cooked every meal, so it was sort of a given that I wanted to do that with my kids," David says. "Becoming a chef really helps in terms of being efficient at cooking, but it’s also great to get the kids involved. They really want to have jobs and be part of dinner and learn and do kitchen prep. In fact, they get allowance for it now."

And for Neil, dinner time is a great opportunity to teach their children lessons they'll carry with them for the rest of their lives. "I don’t think kids should be robotic and always have to be super pollyanna," he says. "But I think napkin in your lap, use your silverware, yes please, eye contact; things like that are good to learn overall and are really, around a meal, that’s a good place to force and instill those kind of ideals."

Taking the time to instill those ideals, while encouraging their children to try new things and expand their palettes, have paid dividends in and outside of the kitchen. "Our son, the other day said, 'You know, I’m really starting to trust you with the things you ask me to do, because the things you’re asking me to do I tend to really like,'" David says. "I’m surprised he said that. Who are you? Why are you being so wise and smart?" So not only are the couple's children learning that living life to the fullest is important for everyone — parents included — but that trying new things pays off and is often a way to bond with those you love.

And that bond, secured at home and often through food and family time, makes it much easier for the couple to enjoy time outside of the house and without their kids. Whether it's going out to dinner — Neil makes it a point to highlight that with the Savor card you get four percent back on your purchases, "which is even a more impressive reason to go out!" — or attending a festival to raise money for children, refusing to treat your kids like kids not only benefits them, but benefits you, too.

"Strong pallet, strong stomach? Constitution? Life? There’s gotta be some kind of moral there," Neil says. There is indeed, and finding it is half the fun.