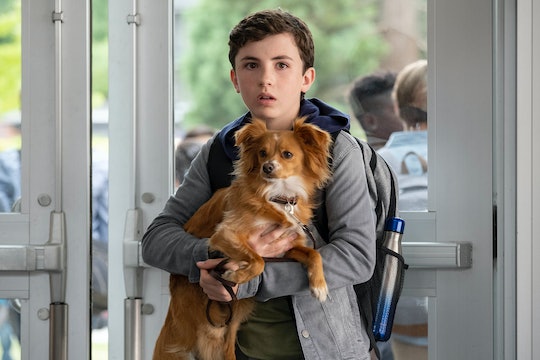 Adding to its selection of wholesome shows for the entire family, Netflix is dropping a highly-anticipated new comedy about an 11-year-old boy with social anxiety disorder and his (talking!) emotional support dog. Thankfully, you won't have to wait much longer to catch this series, which is sure be a heartwarming story for kids and adults alike. In fact, Netflix shared The Healing Powers of Dude's release date exclusively with Romper and good news: it's right around the corner.

The first eight episodes of The Healing Powers of Dude will land on Netflix on Jan. 13, 2020. Described as a live-action family comedy, the series centers on Noah, an 11-year-old boy with social anxiety disorder, as he transitions from homeschooling to middle school with the help of his emotional support dog Dude. Although he's described as a "sarcastic" mutt, it turns out that Dude (voiced by Steve Zahn from Diary of a Wimpy Kid and That Thing You Do!) might need Noah (played by Jace Chapman) just as much as Noah needs him.

Husband-and-wife team Sam Littenberg-Weisberg and Erica Spates co-created the series based on their personal experience with social anxiety disorder. While a comedy, the series touches on very real things, like how Noah's social anxiety can make what may seem like simple, everyday activities, feel like being submerged in quicksand.

Unfortunately, Dude isn't the most experienced emotional support dog and his short attention span and obsession with treats result in a number of comedic hijinks. Still, the dog's got charm and spunk, and ultimately, wants nothing but the best for his new best friend.

While kids will get a kick out of Dude, the show is likely to have parents laughing as well as it reunites Zahn with his That Thing You Do! co-star Everett Scott. "Tom is one of my oldest friends so it was inevitable that I would eventually play his dog," Zahn tells Romper. "In the next decade, my goal is to play his 'Aunt Hilda' or imaginary friend 'Larry.' Tom is absolutely hysterical in this show."

You and your family can catch The Healing Powers of Dude when it drops on Netflix on Jan. 13, 2020.

More Like This
Exclusive: Three Siblings With Super Powers Protect National Parks In Spirit Rangers
The Best Family Movies & Shows Coming To Netflix October 2022
'Firefly Lane' Is Coming Back To Netflix For One More Final Season
Exclusive: Your Favorite Yeti Is Back With More Adventures In New 'Abominable' Series