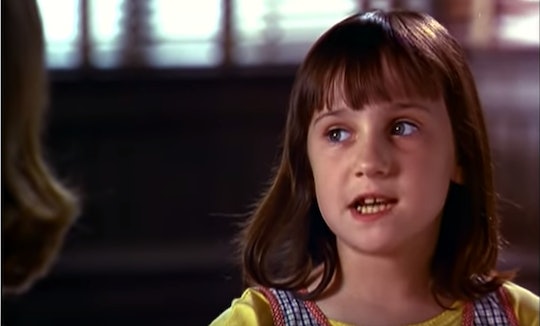 I don't know about you, but movies such as Matilda and Willy Wonka & the Chocolate Factory were a couple of my absolute favorites, growing up in the '90s. Watching kids just like me being thrust into mesmerizing worlds and situations — and coming out on top in oppressive circumstances — was endlessly fascinating. Whenever I came across these two movies in particular on TV, I couldn't help but abandon the remote and be sucked into the magic of it all. Which is why I'm super pumped that Netflix is adapting Roald Dahl Classics into animated series. Because it's going to be epic.

On Tuesday, Nov. 27, Netflix announced a fairly long list of Ronald Dahl tales that will be made into animated event series, E! Online reported. Here's a look at the titles currently in development as part of this deal between the streaming giant and The Roald Dahl Story Company: Charlie and the Chocolate Factory, Matilda, The BFG, The Twits, Charlie and the Great Glass Elevator, George's Marvellous Medicine, Boy – Tales of Childhood, Going Solo, The Enormous Crocodile, The Giraffe and the Pelly and Me, Henry Sugar, Billy and the Minpins, The Magic Finger, Esio Trot, Dirty Beasts, and Rhyme Stew. Production on the first animated series is scheduled to begin in 2019, according to E! Online.

"Our mission, which is purposefully lofty, is for as many children as possible around the world to experience the unique magic and positive message of Roald Dahl's stories," said Felicity Dahl, Roald Dahl's widow, in a news release. "This partnership with Netflix marks a significant move toward making that possible and is an incredibly exciting new chapter for the Roald Dahl Story Company. Roald would, I know, be thrilled."

So far, it seems Twitter reactions to the news have ranged from thrilled to skeptical. One Twitter user commented, "I feel like Roald Dahl would excel in an animated medium. I'm very looking forward to this!"

Another particularly excited person tweeted, "I need to see James and The Giant Peach as well!! That’s what introduced me to his work when I was in Elementary school, then I saw Matilda & Charlie and The Chocolate Factory. I absolutely can’t wait to see this!!!!"

Another Twitter user echoed my sentiments about one particular film. They wrote, "and I’d be willing to bet the original Charlie and the chocolate factor will be better..." along with a GIF of Willy Wonka yelling, "You lose!"

As The Guardian reported, Netflix moving into the animation realm doesn't come as a huge surprise, considering Disney will be removing its content from third party services to launch its own streaming service in 2019.

"Immersing ourselves in the extraordinary worlds of Roald Dahl stories has been an honor and a massive amount of fun, and we are grateful for the trust the Roald Dahl Story Company and the Dahl family have placed in our team to deliver more moments of shared joy to families around the world," said Melissa Cobb, vice president of kids & family content at Netflix, in a news release. "We have great creative ambition to reimagine the journeys of so many treasured Dahl characters in fresh, contemporary ways with the highest quality animation and production values."

I'm not gonna lie; I frequently rely on Netflix to distract my three kiddos from constantly fighting with each other when I really need to get stuff done. So I'm pretty psyched that they will soon be able to watch Roald Dahl classics come to life while I'm writing, making food, or just trying to catch a break every one in a while. I might even have to indulge in some of these animated series alongside them. (Because nostalgia and all that jazz.) Don't let us down, Netflix!

More Like This
Exclusive: Three Siblings With Super Powers Protect National Parks In Spirit Rangers
Prince George Reportedly Got Sassy In A Fight With A Classmate
The Best Halloween Family Pajamas To Match Your Boos
25 Mother And Daughter Halloween Costume Ideas That Are Cute And Spooky