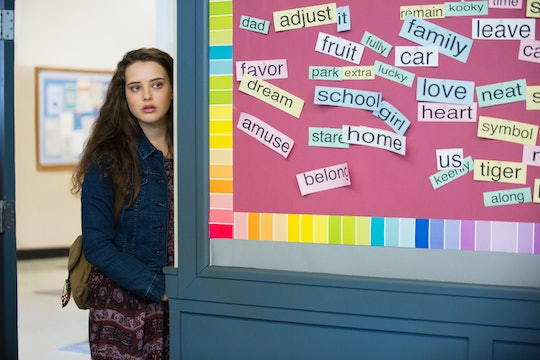 '13 Reasons Why' Addresses Its Most Controversial Scene Two Years Later

When 13 Reasons Why first premiered on Netflix in 2017, it received a lot of criticism for its premise and the way it depicted the suicide of its main character, Hannah Baker. The scene of Hannah's death was incredibly graphic, which many felt was irresponsible on the show's part. Now Netflix is altering the 13 Reason Why scene, two years after the fact.

After the show's premiere, showrunner Brian Yorkey stood by the decision to show Hannah's suicide in minute, brutal detail. He told Entertainment Weekly that it was important to the show's creative team to tell the truth; making the traumatic events of the series "easier to watch" was "tantamount to not telling the truth" in his eyes. He believed that it was more honest to depict Hannah's death realistically. Now, however, it looks like the ensuing controversy has changed his mind.

Per Vulture, Netflix released a statement on their decision to edit the scene. "We've heard from many young people that 13 Reasons Why encouraged them to start conversations about difficult issues like depression and suicide and get help — often for the first time," the network said. "As we prepare to launch Season 3 later this summer, we've been mindful about the ongoing debate around the show. So on the advice of medical experts, including Dr. Christine Moutier, Chief Medical Officer at the American Foundation for Suicide Prevention, we've decided with creator Brian Yorkey and the producers to edit the scene in which Hannah takes her own life from Season 1."

Yorkey shared his own statement as well, also reported by Vulture.

It was our hope, in making 13 Reasons Why into a television show, to tell a story that would help young viewers feel seen and heard, and encourage empathy in all who viewed it, much as the bestselling book did before us. Our creative intent in portraying the ugly, painful reality of suicide in such graphic detail in Season 1 was to tell the truth about the horror of such an act, and make sure no one would ever wish to emulate it.

But as we ready to launch Season 3, we have heard concerns about the scene from Dr. Christine Moutier at the American Foundation for Suicide Prevention and others, and have agreed with Netflix to re-edit it. No one scene is more important than the life of the show, and its message that we must take better care of each other. We believe this edit will help the show do the most good for the most people while mitigating any risk for especially vulnerable young viewers.

Now, instead of following Hannah through the act, the episode cuts from her staring into the mirror right before to her parents finding her body right after.

In its first season, 13 Reasons Why explored the fallout of Hannah's suicide and the events that led up to it. She narrated the series in the form of cassette tapes sent out to each and every person who had negatively impacted her life. According to Self, that may have romanticized suicide by sending the unhealthy message that it would get someone the attention or justice they craved. Some struggling kids may feel that they would be better appreciated after they were gone; 13 Reasons Why fed into that.

Gene Beresin, M.D., director of The Clay Center for Young Healthy Minds at Massachusetts General Hospital, told Self, "13 Reasons Why is a series about how you can [influence] people's thoughts and feelings and actions after you're dead. 'All of the things that I wish that I could change when I'm alive and couldn't, I can when I'm dead.' And that's just wrong."

CNN also reported that, according to the National Association of School Psychologists, exposure to "sensationalized accounts of death" could lead to "suicide contagion" or copycat suicides. Per The Cut, teen suicide rates in boys increased in the month after the show was released.

The graphic suicide was one problematic aspect of the show, but not the only one. The entire series is spawned as Hannah's revenge fantasy, which is not the most delicate way to deal with a topic as serious as suicide. 13 Reasons Why features countless violent scenes of sexual assault as well, including several brutal rapes that are similarly shown in unflinching detail. Will it re-edit those, too?

On this show, the line between "honesty" and shock value is often thin; it seeks to address sensitive topics but often just ends up sensationalizing them. It's good that Netflix has chosen to edit the scene two whole years after its debut (and just in time to get promo for Season 3), but it doesn't get to the heart of why 13 Reasons Why is a controversial show.