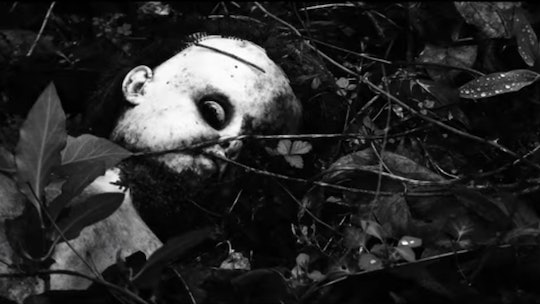 These Netflix Movies Are So Terrifying That People Can't Finish Them

If the weather is keeping you home this weekend, you might want to snuggle up on your couch for a movie marathon. Not sure what to watch? Try taking the ultimate horror challenge and check out these Netflix movies that are so scary, people can't finish them. Earlier this month, you may have heard the buzz about Veronica, the Spanish film about a Ouija board that's supposedly based on a true story. Some viewers reported that they couldn't handle it and had to turn it off, but others said it was NBD. If you've already checked that one off your list, we've got 10 more that are even scarier, according to the streaming service.

Netflix knows what viewers are watching, and it knows when they stop a program before it ends, so the company can use this data to compile a list of its most terrifying films. True, there might be other reasons to stop watching something (the power goes out, the baby wakes up), but generally, you'll resume watching eventually. And of course, sometimes viewers might give up on a movie just because it's awful, but Netflix factored that in, as well; according to Forbes, viewers made it at least 70 percent of the way through these ones, which is much farther than most would be willing to go if they were just plain bad. Do you dare to watch them all? Let's get started.

Be careful when you search for this one; don't confuse it with the Cabin Fever that came out in 2000, or the one from 2002, or the one from 2015, or any of the sequels. It's a 2016 movie with a bone-chillingly unimaginative title and lots of blood. I mean tons. How much blood? Well, it was written by Eli Roth, creator of the Hostel torture porn franchise, if that means anything to you. As always, it begins with some teens going away for a sexy vacation, but this time, instead of an ax-wielding maniac, it's a virus that picks them off one by one.

If you're a fan of The Texas Chain Saw Massacre or The Hills Have Eyes, this film with an IFC pedigree might be more up your alley. It starts with a bank robbery and a kidnapping, but things get weird when the victim escapes and finds herself in an even more dangerous situation. And the clichéd hapless sheriff is played by Alan Ruck, aka Cameron from Ferris Bueller's Day Off!

Inspired by the original Human Centipede movie, a weird loner tries to top it by making one with 12 people instead of just three. That's very meta! It's also very gross and unnecessary.

Eight different directors teamed up for this anthology, based on classic Mexican folklore. It's like Four Rooms, but you have to read! Don't worry about culture shock, though; it's still got the bare breasts and severed pig's heads that American horror fans have come to expect.

An earthquake unleashes a school of prehistoric sea monsters in an Arizona lake during spring break. Think Jaws meets Girls Gone Wild, with Doc Brown taking over for Richard Dreyfuss. Looks like that 70 percent threshold wasn't a very accurate metric, after all.

This one is French, so in addition to being a horror movie, it's also an artsy, sexy, coming of age story, as required by law. A young vegetarian forced to eat meat during a hazing ritual turns into a cannibal or a zombie or something, and there's paint everywhere, and lots of parties, and I think it's maybe too sophisticated for me, but hey, whatever floats your boat.

Dawn has a monster vagina. But it slays rapists! Is that female empowerment or misogynistic trash? You'll have to watch it to find out! Then let me know, because I'm all set.

OMG, those triangle-face people. Even the trailer is bugging me out. This is some freaky sh*t about mayhem and madness, and I am here for it.

Petra from Jane the Virgin picks the absolute worst time to visit Israel. No, not when Trump announced that he was moving the embassy; it's the end times. Demons and whatnot. Watch it with your Evangelical neighbors!

There you have it; 10 movies that nobody's seen the final 30 minutes of. Think you have what it takes to complete them all? Good luck, and don't forget to leave a night light on.