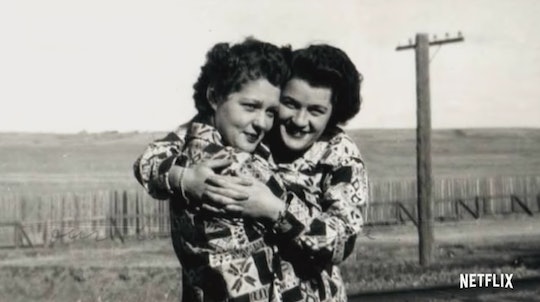 By all definitions, Terry Donahue's life was nothing short of inspiring. In the mid to late 1940s she played in the All-American Girls Professional Baseball League, which later inspired the 1992 film A League Of Their Own. Now, it's the life Donahue lived off the field with a woman named Pat Henschel that's inspired a second film project. Netflix's A Secret Love follows Donahue and Henschel as they come out to their conservative families and reveal their nearly seven-decades long romantic relationship.

"The love story between Terry and Pat is an inspiration and example to us all especially during this time where we are all looking to be uplifted," Jason Blum, one of the documentary's executive producers told TIME.

In an trailer released Wednesday, Donahue and Henschel can be seeing touring an apartment in a retirement community and being told that the facility doesn't currently have any same-sex couples living there. "If they would [live here], would they be accepted?" Donahue asks in the clip. "Because we are a couple."

A Secret Love follows Donahue and Henschel as they reflect on when they first met, how their relationship evolved in secret over the course of more than 65 years, and their decision to come out to their families in their eighties, according to Netflix. It sees the couple, now grappling with advanced age and illness, mulling over the idea of getting married.

Donahue and Henschel met and fell in love in 1947, according to Narratively. At the time, Donahue was a catcher for the All-American Girls Professional Baseball League, an organization Narratively reported enforced strict rules on players' physical appearance and dress in an effort to avoid the perception that any of its players were lesbians. Despite the league's strict rules, the pair managed to maintain a secret relationship throughout Donahue's tenure with the league.

The women later moved to Chicago, where they lived together under the guise of being good friends and roommates, or even cousins, as TIME explained. Eventually, after keeping their relationship a secret for more than 65 years, Donahue and Henschel decided to come out to their friends and families.

"I felt like I was sort of living a lie," Donahue says in the trailer. "I mean, I love my mother but she would have disowned me."

Christopher Bolan, Donahue's great-nephew and the director of A Secret Love, told TIME his great-aunt felt "unburdened" after she came out as gay. "She didn't want to go to the grave feeling like she'd lived a lie," the magazine reported he said. Donahue died at age 93 from Parkinson's in March 2019, according to RIP Baseball.

A Secret Love is set to begin streaming on Netflix on April 29.