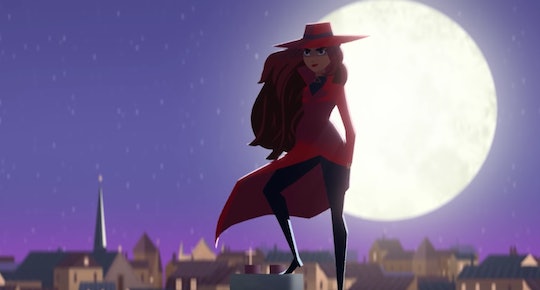 Guys, The 'Carmen Sandiego' Trailer Has Dropped & You Won't Be Disappointed

Any person who watched cartoons in the early 1990's probably remembers Carmen Sandiego — the international woman of mystery who always seemed to be disappearing at any given moment. And now, the younger generation will get to enjoy watching her, too. This is because Netflix's Carmen Sandiego trailer has finally dropped and it looks so good, everyone in the whole family will enjoy it.

If people aren't already familiar with Carmen Sandiego, here's a lowdown. In the 1990's Fox Kids ran a cartoon series titled Where On Earth Is Carmen Sandiego? The show was about a brother and sister team who tried to track Carmen, a "friendly enemy" who was never someone who they could pinpoint. But this new series seems to be just a bit different than the original cartoon series.

Carmen Sandiego seems to focus on Carmen's origins as a worldwide criminal, expanding into Carmen's life attending "crime school" at V.I.L.E. Training Academy for thieves. But, the trailer for the show, which was finally released on Friday, reveals that Carmen is a "good thief" — she steals from other thieves before they can cause massive destruction. In this new Netflix series, Carmen is still traveling to exotic locale, she's still on the run, and she is still sporting that iconic red hat and coat.

The trailer promises that fans of the titular character will be obsessed with it, and their children will enjoy it just as much.

The YouTube comments for the trailer prove that people can't wait for the show to finally premiere.

"Netflix stopping up their game!!," one commenter wrote.

"Holy s— this is epic," another commenter added.

"THIS LOOKS SO FUN AAAAAAH," another commenter chimed in.

And they're so right. If this trailer didn't make it clear enough, the description for the show makes it obvious that this is about Carmen's origin story. The show's description states:

If that wasn't enough to get people to tune in, then maybe the cast might. Gina Rodriguez, star of The CW show, Jane The Virgin, and Finn Wolfhard, also known as Mike from Stranger Things, lend their voice to the main characters in the show.

Even Wolfhard is excited for the show, tweeting out the trailer on Friday.

In addition to being a cartoon and a computer game, Carmen Sandiego and her persona were the stars of a children's TV game show called Where In The World Is Carmen Sandiego? The show, which debuted in 1991, was incredibly educational, having kids search for Carmen all around the world and learn some trivia along the way, according to Circa.

Although this version of the cartoon might contain less trivia than the game show, it still looks like it will take viewers on an incredible trip around the world. And the good news is, people won't have to wait too long to binge watch this new series at all. It premieres (on Netflix) on Friday, Jan. 18. And there will be plenty to watch. There will be 20 episodes to binge that are 22 minutes long, according to Entertainment Weekly.

In just two more weeks, people will finally be able to see Carmen back in action — and share this with their kids, too.